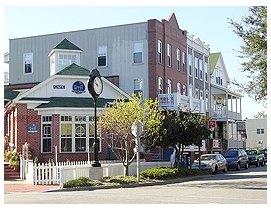 The Town of Manteo wraps around Shallowbag Bay on the eastern side of Roanoke Island, part of North Carolina's Outer Banks. Named the seat of government for Dare County in 1870, this waterfront community incorporated in 1899. In those early days, every store lining the waterfront had two doors - one for those coming by boat, and the other for those coming from the courthouse or one of the inns on Water Street....

Today, county business still brings people to town, as well as many reminders of the island's history, including the representative 16th century ship at Roanoke Island Festival Park, or the George Washington Creef Boathouse and Roanoke Marshes Lighthouse, part of the North Carolina Maritime Museum. Each summer, the town welcomes singers, dancers, and actors back to Waterside Theatre, where they perform the nation's oldest outdoor symphonic drama, The Lost Colony. 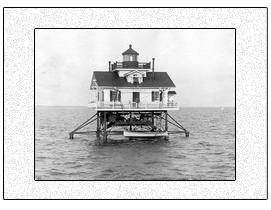 Few will forget the national headlines of two years ago when Bideford apparently became the 'Town that forgot it was twinned'. least of all our Town Clerk! But it seems "forgetting" is something Bideford has been doing for over 400 years. Way back in 1584 several prominent individuals intrinsically linked to Bideford, along with many local people, set sail to found a colony in the 'New World' in what is now the state of North Carolina, USA. That first attempt failed; but the second attempt just three years later at least survived long enough to claim the Birth of the first (and second) Americans in the form of Virginia Dare and an unrecorded child of the Harvie family. What became of that second colony remains one of America's greatest mysteries; and there are several theories of which at least two suggest that there may be descendants alive and well; living in the USA today. If proven, it will re-write the story of America and place not only Bideford, but the town of Manteo in North Carolina at the centre of one of the most pivotal moments in history. Perhaps of almost equal stature is the fact that somewhere in the graveyard of the Parish church of Bideford lay the remains of the first Native American to be buried on English soil.