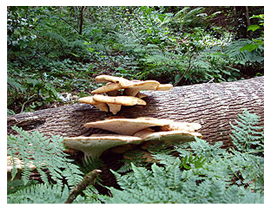 The site is recorded in the Doomsday Book and is to be recommended for County Wildlife Site Status as a recognised ‘Ancient Woodland’. This will provide substantial protection for what’s left of it. However, the site has been much eroded by development and previous land use. What remains however is of high historical and environmental value. It’s proximity to the Town makes it virtually unique in the UK but as a consequence, subject to immense pressure from urbanisation and public access issues. It is of paramount importance that the Woodland be protected and allowed to regenerate and adapt to its changed environment. It’s potential as a Wildlife haven cannot be underestimated in what is a largely near sterile Agricultural and Urban region.

The Woodland comprises of a large number of trees of considerable age, but much of the enclosed development has impacted upon water tables and created a stressed environment for many of the specimen trees in it. As such, several trees particularly around the perimeter are decaying and dying. Nevertheless it still contains a substantial list of Flora and Fauna, the strength of which should allow for a natural regeneration (given a little help).

Trees comprise predominantly of Ash, Oak, Beech & Sycamore, with a wide range of other species including Chestnut, Elm, Wych Elm, Yew, Hornbeam & Wild Cherry. There are additionally, singular specimens of numerous other trees, but there are some non-native species.

The discovery of Elms regenerating and the existence of several uncommon species are particularly pleasing; whilst several of the English Oaks are truly magnificent specimens many hundreds of years old. At shrub level there are predominance’s of Laurel, scrub Holly, and some Rhododendron and much of this will need to be removed if the woodland floor is to be given the chance to regenerate.

Flower species number around Ninety with at least Twenty-Six which classify the Woodland as Ancient in composition (over two and a half times the threshold required for this status). So far, nothing of national rarity has been discovered but there is a prevalence of uncommon and protected species.

Animals once included Otters and Dormice but there are no signs of these now. The Badger Sett on the south side is also vacant although Badger signs are prevalent in the area. There is evidence of foxes and several smaller mammals. Some species of as yet unidentified bat have been reported present and there is at least one species of Woodpecker (Greater Spotted) and one Raptor (Buzzard) resident, amongst a modest population of more common woodland birds.