Clovelly - A Page from of the Past 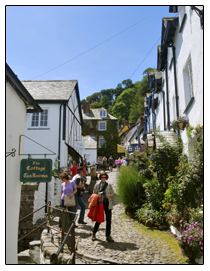 Clovelly is a village on the north Devon coast, about twelve miles west of Bideford. It is a major tourist attraction, famous for its history, extremely steep car-free cobbled main street, donkeys, and beautiful location looking out over the Bristol Channel. Thick woods shelter it and render the climate so mild that even tender plants flourish.

Set into a steep hillside, Clovelly is one of the most famous villages in the world. The single cobbled high street winds its way down the hillside through traditional whitewashed cottages festooned with fuchsias and geraniums. Traffic is banned from the high street with visitors parking at the top of the hill adjacent to the Heritage Centre. The high street drops through the 16th century cottages to a small harbour and for a small fee, a landrover service ferries visitors up and down the steep hill via a back road, to the harbourside Red Lion Public House.

History of the Village 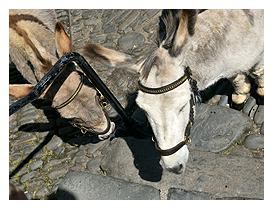 Clovelly used to be a fishing village and in 1901 had a population of 621. It is a cluster of wattle and daub cottages on the sides of a rocky cleft; its main street resembles a cobbled staircase which descends 400 feet (120 metres) to the pier, too steeply to allow wheeled traffic. Sledges are used for the movement of goods. The street is lined with houses, and a small number of shops and a cafe and a public house. All Saints' Church, restored in 1866, is late Norman, containing several monuments to the Cary family, lords of the manor for 600 years.

The surrounding scenery is famous for its richness of colour, especially in the grounds of Cary Court, and along The Hobby, a road cut through the woods and overlooking the sea. The South West Coast Path National Trail runs past the village, and the section from Clovelly to Hartland Quay is particularly spectacular.

Fresh from the Trawler

Lobster and crab landed here may be found in the local restaurants or sent away as far as France and Spain. Fish can be caught by rod and line or bought from local trawlers. Trips can be taken around the Bay or further to Lundy Island. Much may have changed over the years, but the harbour still works for its living and definitely deserves a visit.