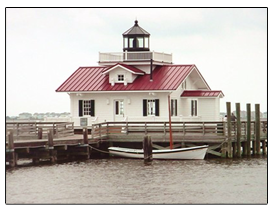 The story though, did not end there. Bideford became Britain's third largest port importing literally millions of bales of tobacco and trading in pottery and other goods. In Victorian times, Andrew Carnegie (of Carnegie Hall New York fame) donated the 'free library' adjacent to our Town Hall and many left for a new life in America from what is now the Royal Hotel; and of course, many alive today remember the American camp on what is now the site of Morrison's supermarket.

Now, all these years later, and some 30 years after a 'friendship' document was drawn up, Bideford is finally forging further links with the Town of Manteo. At the end of April, a small party of largely self-financing members of the Town Council travelled to Manteo on something of a 'Busman's Holiday' to present gifts, meet local dignitaries, and build some economic, cultural, and tourism bridges in preparation for a formal 'Twinning' hopefully sometime in 2009 back here in Bideford.

A full itinerary for the visit was arranged which included lunch at Roanoke Island Festival Park, a tour of the Elizabeth II ship, settlement site and museum, a visit to an English class at Manteo High school and meetings with local dignitaries.

The Town of Manteo, located on Roanoke Island on the northeastern part of the Outer Banks of North Carolina is a waterfront community that incorporated in 1899. The downtown waterfront wraps around Shallowbag Bay and is a welcome harbor to those coming by boat and on foot. It is a lively town with delightful waterfront shops, eateries and historical sites. Named the Dare County seat in 1870, Manteo has always been a stop over for business and pleasure.

Manteo, named after one of the Indians that befriended Raleigh's lost colony is the metropolis of the Outer Banks. Its appearance today reflects the past history of the first colonists, the fishing and boating industry, and waterfront transportation and local businesses. Manteo was known as a busy wharf with steamers coming into port with supplies, mail and visitors. Water transportation was the only means of getting off Roanoke Island to visit friends, relatives, seek hospital care, and travel for business. Today, homes and businesses portray a mixture of architectural styles ranging from Elizabethan, Victorian, Edwardian, Early American, post World War II, and modern. Manteo still offers a nice place to live and visit thanks to the hard work of a concerned community, elected officials and dedicated town employees. Positive results have come out of careful planning and implementation of needed updates and changes.
Manteo has several places of interest to visit or relax and enjoy the day and changing weather. Along the downtown waterfront pieces of history can be found with the newly constructed Marshes Lighthouse and the Roanoke Island Maritime Museum featuring the Creef Davis Boathouse known for the beginning of wooden boatbuilding on Roanoke Island. While downtown you can always look up to the sky and see the weather flag that is flying from the recently restored US Weather Bureau tower. This tower played an important role back in the late 1800’s when radio was the only communication on the island. Back in that day, the local post office was responsible for alerting local citizens of upcoming weather changes as they received radio communication from the National Weather Bureau each day. No matter the weather, there’s always something different to do in Manteo, and another reason to return. Maybe there’s a concert or art show or nature program that brings you back. First Fridays, Dare Day, July 4, Virginia Dare’s Birthday, Halloween, and Christmas are special times in the town for residents and visitors alike. But often it’s the everyday interaction with people that makes you pause, turn back, come again. You might meet an island native who traces his family back four generations. Or then you might meet someone from your own hometown.
“What’s special about Manteo is that, if you’re willing to take a moment of your time to say hello, you may very well make a friend.”