053.    TO RECEIVE APOLOGIES AND REASONS FOR ABSENCE

054.    TO RECEIVE DECLARATIONS OF INTEREST ON ITEMS ON THE AGENDA

Proposed by Councillor Lawrence and seconded by Councillor Mrs Langford, the minutes of the meeting held on 19th October 2021 were approved and signed as a correct record.

057.     TO RECEIVE UPDATES ON ORGANISING THE CELEBRATIONS FOR HM THE QUEEN’S PLATINUM JUBILEE.

The Chairman reported that everything was progressing; she had spoken with South West Event Management regarding the daytime events and the organiser was happy with the changes made to the plan she had submitted.

The Clerk was concerned that she had, after leaving telephone messages and emails, that Sonic Fireworks had not responded. Councillor Bushby had also tried. The Clerk would look for alternative companies but would continue trying to contact Sonic.

The Chairman concluded that it was of utmost importance that the timing of the fireworks is not too late finishing on the night.

058.     TO AGREE THE BUDGET FOR A CHILDREN’S PLATINUM JUBILEE KEEPSAKE.

Councillor S Inch had sourced a highly reputable company to produce a bookmark, these details had been circulated to the Tourism Committee between meetings (as attached and forming part of these minutes).

The Clerk had contacted ETW, West Croft, Kingsley and St Mary’s Schools to get an estimation of the numbers of primary school children, these would be Bideford Parish children. An approximation of 1,000 children was achieved.

Councillor Lawrence voiced his own concern that this was not what children wanted and that the money should go to another use – he would prefer a lasting reminder of the occasion. He further suggested that the schools be contacted and asked what their preference would be or what they thought the children would like. The Clerk explained that when she had received the responses from the schools regarding numbers, the Head Teachers had expressed their delight at the idea of a special bookmark.

Councillor Bushby pointed out that it was the decision of this Council what to give to the children.

059.     Councillor S Inch added that he knew the other Councils would be giving a keepsake and it would look poor of this Council not to be giving. The Chairman agreed.
Councillor Inch further pointed out that at the last Jubilee in 2012, the Bridge Trust had contributed to the gift and could be asked if they would like to again.

Further discussion followed about the necessity for traditions of this nature, but more members than not agreed that a gift should be purchased.

RECOMMENDED: That a bookmark of the type and description in the attachment is purchased for primary school children who come from the Bideford Parish. A budget of £1,500 for this to be set and taken to the next Staffing, Finance and General Purposes meeting. Bideford Bridge Trust to be approached to share the costs as they did in 2012.
(Vote – For: 3, Against: 1, Abstentions: 1)

The Chairman thanked the Clerk for circulating a design and costings (as attached and forming part of these minutes) for the backboard of the Port Memorial Decorative Bed.

Members discussed the wording on the far right panel and considered it be “tweaked” and asked the Clerk to make a few minor changes but keep the essential idea. The Clerk would make the changes.

The Clerk pointed out the variable costing of between £400 and £450, explaining that this is because there are a few months to go before getting the board made, and material costs were fluctuating during these uncertain times.

Overall members liked the design and considered the price to be very fair, for the size of the board.

Proposed by: Councillor Lawrence and seconded by Councillor Bushby, and

RECOMMENDED: That the changes, as discussed, be made to the design and the price agreed with JAG signs, ready for production nearer the time.

061.     TO RECEIVE AN UPDATE ON A CHILDREN’S CHRISTMAS PARTY AT THE PANNIER MARKET

The Chairman explained that this event had been cancelled at the Staffing, Finance and General Purposes meeting held on 28th October 2021 when an Emergency Grant application for a New Year’s Eve party had been discussed. It was considered that there were many events being held at the Pannier Market through the Festive period and that there had traditionally been a New Year’s Eve party held in the venue each year. The budget allocated to a Christmas Party was awarded to the Emergency Grant request, with Bideford Bridge Trust matching the amount.

All members agreed this was the right course of action.

Councillor Lawrence reported that a meeting with the Market Development Officer, Chris Farris, was being arranged to discuss the event. The Clerk added that she had given Chris the paperwork that had been produced and he was happy to bring further ideas forward:
• A clotted cream making demonstration
• Make your own cream races

Councillor Bushby suggested a “Bake Off” style competition with cakes.

Councillor Lawrence and the Clerk would make a concerted start in the New Year.

Councillor Mrs Langford had been in contact with Up Close, who would be very interested to bring their Radio version of War of the Worlds to the Town Hall as their final performance. She explained that this production is an audience interactive one with everyone being involved with making the sound effects. It had been hugely popular over the past months, being shown outside and inside. She added that March would be a good time.
Councillor Mrs Langford added that this, as with other productions, would be live broadcast on Soundwave Radio (a project of Up Close).

The Clerk would look at dates available during March, pointing out that there were Town Council functions and events in March already. She added that she would liaise with Up Close.

Councillor Mrs Langford raised another project that Up Close are interested in progressing. They would like to present a small “Fringe” weekend in Bideford, using various venues including the Town Hall. (Anyone familiar with the Edinburgh Festival and Fringe will know that this is small groups of entertainers travelling around a Town or City putting on shows at various times).

Councillor Lawrence expanded by explaining that this would be over a Friday, Saturday and Sunday, adding that it was an idea still in the early stages or organising and would be planned for either November 2022 or February 2023.

The Clerk pointed out that permission would need to be granted from Torridge District Council and that members of the Tourism Committee (she included herself) would need to volunteer to be on site for security purposes, especially with locking up the building.

Members considered this to be a good idea and further considered combining it with a previous idea of a Busking event. The Clerk would liaise with Up Close for more ideas. Councillor Lawrence would, as a Trustee of the organisation, also find out more.

The business of the meeting having been completed, the Chairman thanked the members for their attendance and the meeting concluded at 6.50 pm. 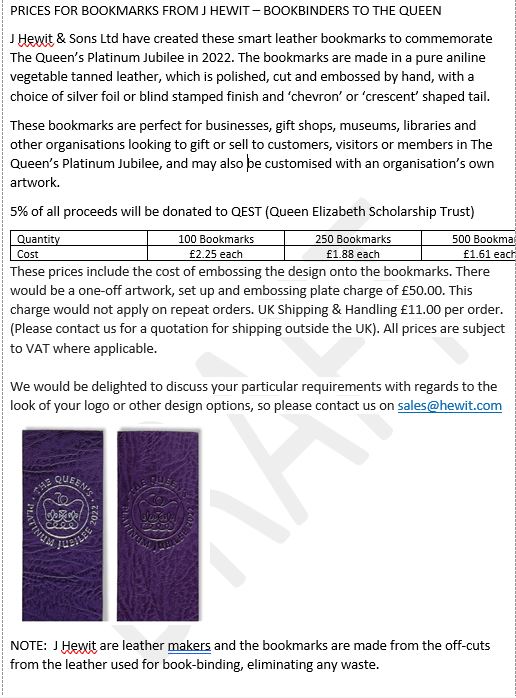