Minutes of the Staffing, Finance & General Purposes Committee held in the Town Hall, Bideford on Thursday 10 June 2021 at 6.30 pm

RESOLVED: That Councillor Bushby is appointed as Chairman of the Committee for the coming year.

RESOLVED: That Councillor Mrs Gubb is appointed as Vice Chairman of the Committee for the coming year.

004.     DECLARATIONS OF INTEREST AND ANY REQUESTS FOR DISPENSATION ON ITEMS ON THE AGENDA

No declarations of interest were declared at this point.

A Member of the public spoke in support of agenda item 12 – cycling scheme. He highlighted the health benefits to be gained from cycling and advocated safe alternatives to travel by vehicle. He said that safe cycling paths and trails also encourage tourism and that as a town we need better connections to the Tarka Trail, charging points and cycle storage.

A second Member of the public, who is a Member of Northern Devon Cycling club, also spoke in support of agenda item 12 – cycling scheme.
She talked about the Local Cycling and Walking Infrastructure Plan (LCWIP) and funding proposals from the various partners. She encouraged the Town Council to contribute towards the cycling scheme and felt that it may be able to make a bid for funds via the Welcome Back Fund.

• The Town Clerk advised that a number of grant recipients had written to the Council thanking them for their grants.
• She advised that the Mayor’s Parade and church service had been cancelled due to lack of numbers.
• She advised that a laminated charter had been received from Landivisiau to celebrate the 45th anniversary of the twinning. It was agreed that the Office would arrange for a reciprocal item.
• Councillor Christie advised that at a recent Torridge District Council Leadership meeting, The Chief Executive had announced they had received a government grant of £797,00 for facilitating housing delivery. He said they would be spending this on repairing the wall at Brunswick Wharf. Brunswick Wharf will be in the ownership of a private Developer, so this funding will not benefit the community or facilitate any social housing. Torridge District Council Officers will be talking to the Developer to ask him to increase the sum he is to pay for Brunswick Wharf, but as the contracts have already been signed, this will be voluntary on the part of the Developer. Councillor Corfe advised that she has been in touch with the Developer to ask him to consider spending some of this funding on social housing.

A question was raised about the Christmas light budget and whether the electricity costs and storage costs are included in this budget. The Town Clerk advised that they are.
A second question was raised concerning item 39 – weedkiller. The Town Clerk was asked not to purchase the Round Up Pro Vantage 480 Concentrated Glyphosate Weed Killer, and instead to find out what was used by Northam Town Council, as they have sourced an alternative product.

RESOLVED: That the draft list of payments is approved with the exception of item 39.

009.     Members received and approved the Council’s interim Independent Auditor’s Report as at 31 March 2021.

RESOLVED: That the Council’s Independent Auditor’s Report as at 31 March 2021 is accepted.

Members considered a request from the Store Homelessness Project for an Emergency Grant.

RESOLVED: That a grant of £1,000 will be awarded to the Store Homelessness Project on confirmation that they have secured the remainder of the total funding required for the project.

Members considered a request from TTVS for the Town Council to make a funding application to Awards for All in order to fund the Community Connector role. The Town Clerk provided Members with correspondence between her and the Chief Executive of TTVS where she questioned the eligibility of The Town Council to apply for the funding. The Chief Executive had assured her, that this would be in order.

012.     CONTRIBUTION TOWARDS THE CYCLING SCHEME

Members considered a request from Torridge District Council for a contribution towards the cycling scheme.

RESOLVED: That a contribution of £5,000 is made towards the cycling scheme.

Proposed by Councillor Bushby seconded and

RESOLVED: That the project is supported. The Town Clerk will apply for funding via the Welcome Back Fund with the fallback position that the baskets will be funded via the Projects Fund if this bid is not successful.

Members received the feedback on the suggestions for funding from the Welcome Back Fund.

The Town Clerk had circulated the Service Level Agreement between Torridge District Council and Bideford Town Council to Members, and asked if they were willing to sign it, and take responsibility for delivering the fund.

Due to the short time scales for delivering projects in connection with the Welcome Back Fund it was agreed that delegated authority would be given to The Mayor, The Chairman of SFGP and The Town Clerk to progress the projects previously suggested by Members, that fit the criteria. The Town Clerk advised that the initial focus would be on delivering the Pannier Market and Town events, employment of a seasonal Maintenance Officer via an agency, Hanging baskets and planters.

Councillor Christie asked if the Town Clerk could contact Mr John Puddy to see if the Maritime History Day he was proposing for August, could be supported by the fund. The Town Clerk agreed to contact Mr Puddy.

RESOLVED: That the Service Level Agreement between Torridge District Council and Bideford Town Council for the delivery of the Welcome Back Fund is agreed and signed. Furthermore, delegated authority is devolved to the Staffing and Finance Committee Chairman, the Town Mayor and the Town Clerk to progress a Welcome Back Fund bid.

RESOLVED: That The Town Clerk applies to the Community Enhancement Fund for the following costs:
• A replacement bench for the one that has been missing at Park Lane for a long time.
• The materials to re-stain the Quay benches (approx. £300).
• Chapter 8 training for one of our Maintenance Team, who is not currently trained.
• Renovation of the (listed) fingerpost at Gammaton and clearing of the surrounding overgrowth.
• Gully cleaning
• Paint to repaint the East-the-Water bus shelters. (ETW in Bloom are willing to undertake this task)

016.     RECOMMENDATION FROM THE EMERGENCY PLANNING COMMITTEE

Members considered the recommendation from the Emergency Planning Committee regarding the costings for the Household Emergency Plan booklet.

It was suggested that the Neighbourhood plan questionnaire is circulated together with the booklet.

It was also suggested that the front cover of the Emergency Plan booklet includes the words: “Retain for future use.”

Councillor Christie advised that some funding may be available to cover the costs of printing and distributing the booklet.

RESOLVED: That the costs for printing and distributing the Household Emergency Plan booklet are agreed, funding is applied for, and that the Neighbourhood plan questionnaire is circulated at the same time.

a.         Members received an update on the tasks undertaken by the Maintenance Operatives and noted the report.

b.         Members considered the purchase of a flame gun to kill weeds.

RESOLVED: That a flame gun is purchased for use by the Maintenance Team.

a.        There is a confidential minute associated with this item.

b.         A Town Council plaque will be awarded to the Head of East-the-Water school on her retirement.

The business of the meeting having been completed, the Chairman thanked the members for their attendance and the meeting concluded at 7.25 pm. 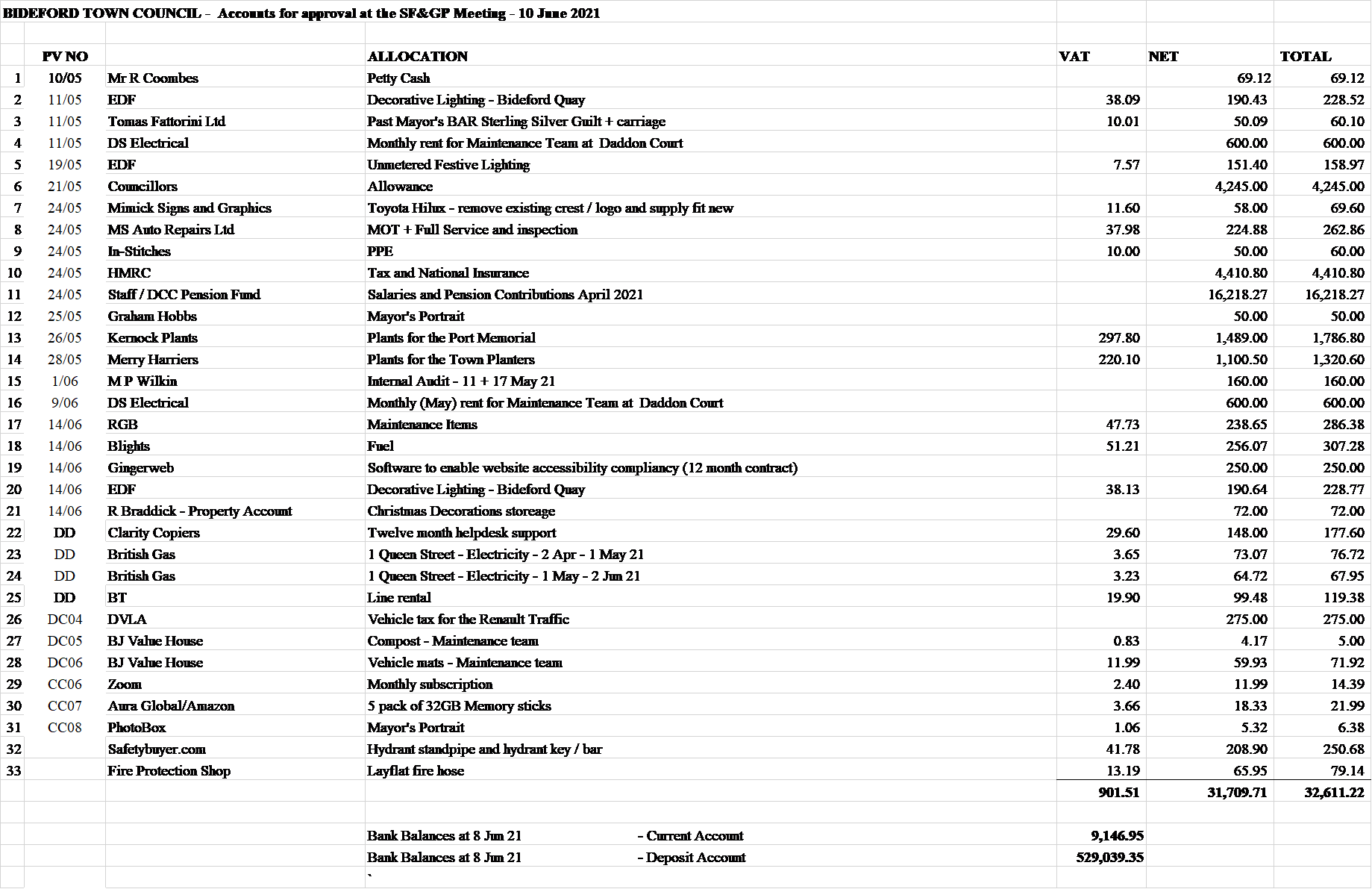