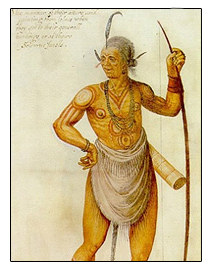 On April 27, 1584, Captains Philip Amadas and Arthur Barlowe left Plymouth to explore the North American coast for Sir Walter Raleigh. The party of explorers landed on July 13, 1584, on the North Carolina coast, just south of Roanoke Island, and took possession of the country for Queen Elizabeth. On the fourth day they were visited by Granganimeo, brother of Wingina, chief of the Roanoke Island Indians. After a short period of trading, Barlowe and seven others went by boat to Roanoke Island at the north end of which they found an Indian village, where the town of Manteo now stands. Native Americans, Wanchese and Manteo, were persuaded to return to England to meet Raleigh and Queen Elizabeth I.

The next spring, Raleigh sent another colony to Roanoke Island. The expedition, commanded by Raleigh's cousin, Sir Richard Grenville from Bideford, sailed on April 9, 1585. Included in the group of ship captains and colonists were Philip Amadas and Simon Ferdinando of the expedition of the previous year; Thomas Cavendish, destined to be the third circumnavigator of the globe; a scientist named Thomas Hariot; Grenville's half-brother, John Arundell, brother-in-law, John Stukeley; Commander Ralph Lane (who later declared Grenville as being “insufferable”), and an artist, John White who was set to become a pivotal player in the Roanoke Sagas. The two Native Americans, Wanchese and Manteo, who had travelled to England the previous year also returned to America on this voyage.

For the colonists, relations with the Indians continued friendly enough for a while but eventually deteriorated to the point where the Colonist’s lack of adaptation to the environment left them in a perilous state. By May 1586, the colonists having outworn their welcome with the Native Americans, were at open war with them.