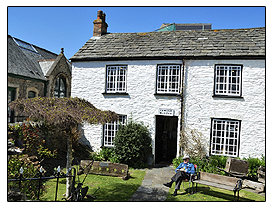 Exmoor ponies can be seen roaming freely on the moors. They are a landrace rather than a breed of pony, and may be the closest breed remaining in Europe to wild horses. The ponies are rounded up once a year to be marked and checked over.

In 1818 Sir Richard Acland, the last warden of Exmoor, took thirty ponies and established the Acland Herd, now known as the Anchor Herd, whose direct descendants still roam the moor.

In the Second World War the moor became a training ground, and the breed was nearly killed off, with only 50 ponies surviving the war.

The ponies are classified as endangered by the Rare Breeds Survival Trust, with only 390 breeding females left in the UK. In 2006 a Rural Enterprise Grant, administered locally by the South West Rural Development Service, was obtained to create a new Exmoor Pony Centre at Ashwick, at a disused farm with 17 acres of land with a further 138 acres of moorland. 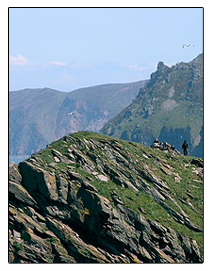 The scenery of rocky headlands, ravines, waterfalls and towering cliffs gained the Exmoor coast recognition as a Heritage Coast in 1991. This dramatic coastline is an adventure playground for climbers and explorers, with its with huge waterfalls and caves. The cliffs provide one of the longest and most isolated seacliff traverses in the UK. The South West Coast Path, at 630 miles (1,014 km) the longest National Trail in England and Wales, starts at Minehead and runs along all of Exmoor's coast.

There are small harbours at Lynmouth, Porlock Weir and Combe Martin. Once important for coastal trade, their primary use now is for pleasure sailing and fishing.