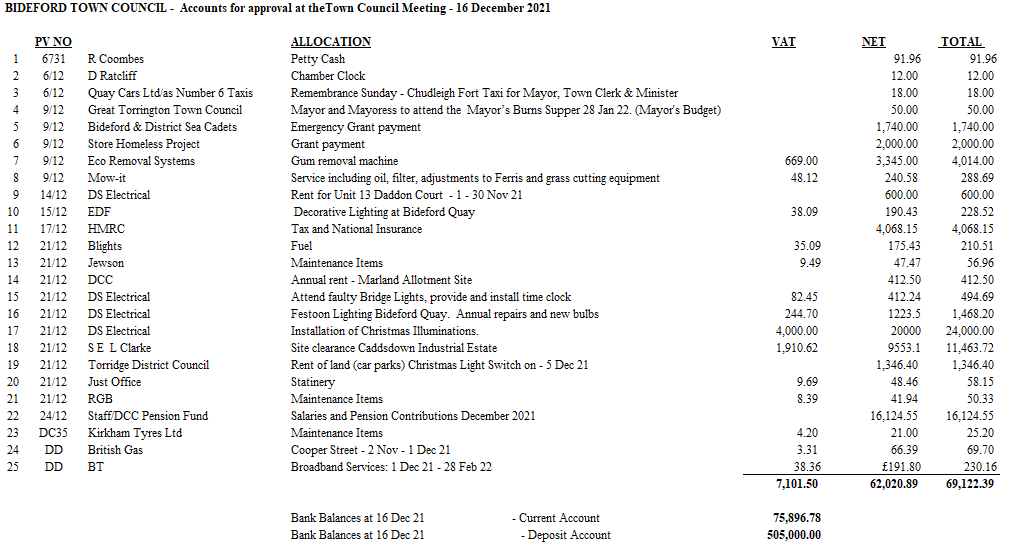 Dear Council,
It is with some real sadness that I cannot attend the meeting but given the rising Covid rates and my contact with high-risk people I feel it would be a tad irresponsible.
To that end, I wish you all a very safe and happy Christmas and will look forward to the New Year and meeting you all again.
I have a couple of things I would like to report on:
1.    It has been brought to my attention that a piece of land is for sale that possibly has a historic industrial planning attached to it. The piece of land is at the Coach Drive turning by the A386 on the way out of Bideford. The planning was granted in 1982 and, as far as I am aware, a shovel was placed in the ground to maintain the application in perpetuity. I have tried to see if there is any information available on this but to no avail. I have been told the planning MAY have lapsed but I don’t seem to be able to find any actual information on it. Given that it is now up reportedly up for sale and has definitely been cleared I believe it may have quite an implication on the area itself and I am not sure a planning granted in 1982 would have undergone the correct scrutiny as deemed today. I believe it is unfit for industrial purposes and I would ask the Council to see if there is any information that can be sought and to perhaps provide comment as to the suitability of a development of this nature in the area it is, should it still be an active planning.
2.    Clovelly Gardens North, the footpath there has become bordering on unusable. There is a bit of a back story to this. I have found out it was adopted when the A39 was de-trunked however it was never part of the documents hence the condition it is now in. We have managed to get funding for the footpath to be resurfaced this financial year however due to the structural issues it has required multiple parties to be involved but we got to design phase. The work design has hit a snag with any resurfacing works potentially being compromised by the structural wall. The top four courses of blocks are looking less than in the best condition and placing vibratory equipment and additional weight on them could cause an issue long term. I understand the frustrations of the public, but any works here must be in line with asset management principles and ensure they are the correct and safe to complete. They will be completed but what is there was not foreseen and to that end it will take a bit longer.
3.    Cllr Hellyer and I have both volunteered to be part of the County SEND Task Group. This is a huge undertaking as I am sure you will understand but I am confident we have a very good and active team and hope to make the difference needed to help raise County out of the special measures it was placed in by OFSTEAD. I can assure you this will be a priority to me, and I feel I may have quite a bit to offer already. The team itself is excellent and the Officers are bringing a lot of confidence and expertise with them.
Merry Christmas to all and a Happy New Year.
Cllr Jeff Wilton-Love