The following year 1588 was the Armada year. Sir Richard Grenville, who was preparing a new fleet at Bideford to go to Roanoke, was ordered to divert his five ready ships to the English Navy for service against the Armada. This is almost certainly how such a small town as Bideford was able to supply the third largest English fleet to fight the Armada; perhaps though the most intriguing part of this event is that it is recorded that the Native American buried in Bideford’s Parish Church, was onboard one of those ships bound for Roanoke. Whether he became one of those involved in the Armada war is uncertain but it is tantalizing to think that he may have also been the first Native American to fight alongside the British in defence of England. 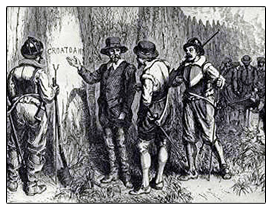 When they arrived, they found the settlement deserted. One of the remaining posts of the Palisade had carved on it the word ‘CROATOAN’, which suggested the settlers had fled to the nearby home of Manteo’s friendly Native Americans.

Long after the establishment of the Jamestown settlement in Virginia in 1607 too, the Virginia colonists showed a constant interest in trying to learn from the Native Americans the whereabouts of the Roanoke settlers and despite several well documented stories of blue-eyed Native Americans, English styled fields, and a sighting of several white men and a young girl beating copper for the Native Americans, nothing was ever fully investigated and the story of the Lost Colonists was destined to become America’s greatest Mystery.
The Awakening