Minutes of the Market Management Committee held in the Bideford Pannier Market Hall on Thursday 10 November 2022 at 6.30 pm
PRESENT:
North Ward:
Councillor D Bushby
East Ward:
Councillor J McKenzie (Chairman)
West Ward:
Councillor C Hawkins
Market Representative:
Ms E Hilton
IN ATTENDANCE:
Mr R Coombes (Deputy Town Clerk)
59.    APOLOGIES FOR ABSENCE
Councillors Mrs J Gubb (East Ward – personal) and Mrs L Hellyer (East Ward – sick).
60.   DECLARATIONS OF INTEREST AND ANY REQUESTS FOR DISPENSATION ON ITEMS ON THE AGENDA
There were no declarations of interest.
61.   PUBLIC PARTICIPATION SESSION OF 15 MINUTES DURATION
N/A.
62.   MINUTES
Proposed by Councillor McKenzie and seconded by Councillor Bushby, the Minutes of the Meetings held on 29 September and 1 November 2022 were approved and signed as a correct record.
(Vote – For: 3, Against: 0)
63.   ACCOUNTS
It was proposed by Councillor McKenzie and seconded by Councillor Bushby, and
RESOLVED:  That the lists of payments for 10 November 2022 be approved.
(Vote – For: 3, Against: 0)
64.   CHAIRMAN’S / MARKET ADMINISTRATOR’S REPORT
There was no report.
65.   MARKET HALL:
a. Events.
Members had sight of the below flyer that had been circulated locally, within the Market and widely on social media.
A banner will also made promoting the Market over the Festive Period. 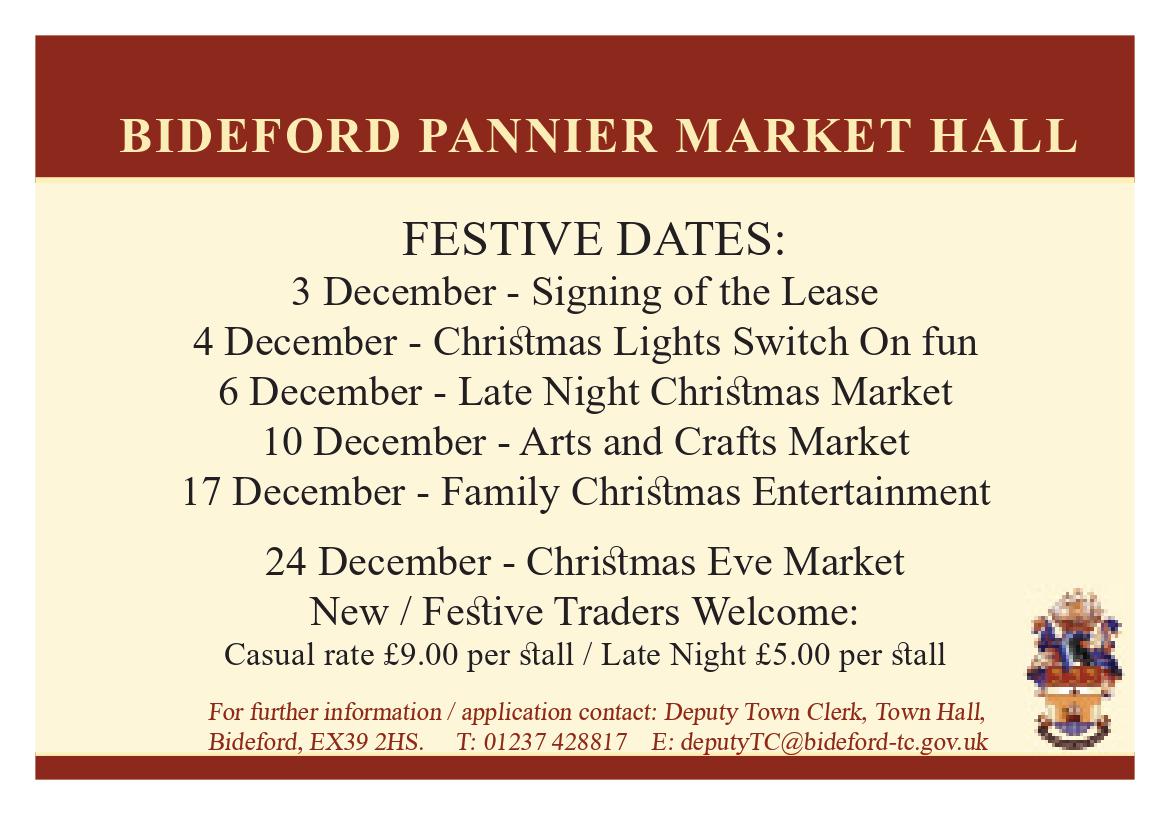 The Clerk advised that the Torridge Arts Crafts will also support the Market on Saturday 26 November 2022; there will be a Bingo session in the Evening and a Food Festival on the Sunday.
Prior to that there will begin a sequence of England’s football games at the World Cup screened in the Hall:
Monday, 21 November England v Iran 13.00
Friday, 25 November England v USA 19.00
Tuesday, 29 November England v Wales 19.00
The Events will be run by the Market’s collaborator and will include food and a bar.  The Clerk confirmed that the Market had a TV Licence.
The Friends of St Helen’s (Abbotsham) School will be hiring the Market, in a repeat of last year’s very successful School Christmas Fayre, with stalls, games and entertainment.
In addition, the Children’s Hospice South West – Light up a Life service will be hosted by the Market on 10 December 2022; the Chairman fulfilling the role of Deputy Mayor confirmed his attendance.
b. Opening Dates during Christmas / New Year Holidays.
The Clerk advised that he had asked the Market Hall Tenants, via E Mail, whether there was a desire to trade during the period 28 to 31 December 2022.  One did indicate a willingness to open on Saturday 31 December 2022.
Ms Hilton had similarly canvassed the Tenants with the same response.
It was confirmed that Butcher’s Row tenants retained the opportunity to trade / access their Units during the period.
Proposed by Councillor McKenzie, seconded by Councillor Bushby and
RESOLVED:  That the Market Hall would close after trading on Saturday 24 December 2022 and reopen for trading on Tuesday 3 January 2023.
(Vote – For: 3, Against: 0)
66. TENANT REPORT
Ms Hilton advised:
a. That the Defibrillator had been drawn on three occasions but not activated.  On two, a policeman and a member of the public using an app had been drawn to the Butcher’s Row Gates, on the south side, but not directly to the side of the building where it is housed.
Ms Hilton believed that a sign should be mounted, highlighting the siting of the Defibrillator, as the individual had shown signs of panic whilst trying to locate the equipment.
Members expressed agreement indicating that the sign should be green / white.
b. The September / October footfall had been up although there were Trip Advisor notices that were not favourable.  The Clerk will liaise with the Council’s website / social media officer in reviewing those Market reviews.
She believed that those stalls in the Hall that were simply empty should be removed / stored until required.
Members agreed.
c. That a determined member of the public had set off an alarm when trying to pass through the locked and closed central glass doors.
(Note: the doors are individually alarmed and “sound” in the event that they are tampered with.  The glass doors do have the words “Automatic” posted on them and “spots,”  in the interests of safety.)
d. Ms Hilton spoke of her Market representative role and the difficulties it presents.  The Clerk indicated that each tenant had his contact details and can raise individual concerns with him; it was not for Ms Hilton to suffer in her purely voluntary capacity.
Members discussed the Election process whilst noting the effective voluntary contribution made by another Butcher’s Row tenant.
67. PART II CLOSED SESSION
The Chairman confirmed that there was no Chairman’s Report, nor any Tenant / Trader matters to discuss.
The business of the meeting having, therefore, been completed, the Chairman thanked the members for their attendance and the meeting concluded at 7.11 pm.