Minutes of the Allotments Committee Meeting held in the Council Chamber, Town Hall, Bideford on Monday 12 September 2022 at 6.00 pm

Prior to the start of the Meeting the Chairman led the Chamber in a minute’s silence to respect the passing of Her Majesty Queen Elizabeth II. (Councillors and the Officer wore black armbands – the outgoing Chairman, a black rosette.)

RESOLVED: That Councillor S Inch is appointed as Chairman of the Committee for the coming year.

(Councillor S Inch assumed the Chair and thanked the Members for their vote.)

2.   ELECTION OF A DEPUTY CHAIRMAN

RESOLVED: That Councillor Mrs J Gubb is appointed as Deputy Chairman of the Committee for the coming year.

4.   DECLARATIONS OF INTEREST ON ITEMS ON THE AGENDA

There were no declarations of interest, though the Chairman highlighted the Tricks representatives’ interest in Item 14.

A member of the Public, whose residence abuts the Pollyfield Allotment Site uppermost / East boundary, thanked the Council for attending to brambles (on the Site).

The Clerk confirmed that they would be attended to later in September and again in February next year in a two yearly agreed cut back.

The Public Member spoke of a good rapport between Allotment Site Tenants and local residents. He noted that there were a few unkempt and overgrown plots in contrast to some very fine plots.

The Chairman alluded to the diktats within the Lease Agreement and Council communications.

The Clerk detailed the process of inspections, letters of encouragement leading to a twenty eight day Notice period. He explained also that there are those that can not commit the same time / industry; he also noted that Tenants are encouraged to notify the Council of any non-attendance through ill health.

A second member of the public whose residence also abuts the Site made a specific reference to unsightly green plastic sheeting on a plot.

The Clerk will arrange a visit to the Site with the Deputy Chairman.

The Marland Chairman enquired about the possible introduction of chickens to the (Marland) Site, notwithstanding the current Avian Flu restrictions.

The Clerk confirmed that chickens were allowed and would arrange for detail on the Councils agreement / conditions to be forwarded to the Marland Allotment Association Secretary.

The Minutes of the Meeting held on 5 April 2022 were approved and signed as a correct record.

The recently elected Association Chairman, Mr Lamey, reported that all was going well with the Site.

He thanked the Council (Maintenance Team) for attending to the gate post.

Mr Lamey confirmed the election of a new committee with two additional members.

Christmas will see a further Community Event on 17 December 2022, including mulled wine, an opportunity to check plots.

The Chairman, Councillor Inch, noted, with the pleasure, the Community involvement.

In the absence of the Handy Cross Allotment Chairman, the Clerk reported that he and the former Chairman had visited the Site during the Inter-Site Challenge. It was clear that the Association Committee were working hard for the Site, and similarly engaged in Community Event / work days.

Whilst there were some very impressive and outstanding plots on site there were, nonetheless, some that were poorly attended.

In the absence of a representative the Clerk made reference and indicated thanks to a tenant who had provided much help and support to the Council in addressing day to day issues.

The Site was in good order although had suffered with the dry summer conditions.

Recently there had been concerns with dogs running free and disturbing plot holders. The Clerk highlighted that dogs should be restrained and not cause nuisance. Tenants knew this but signs had been introduced highlighting the issue.

He made reference to the passing of a long term tenant and that vacant plots had been offered to those on the waiting list.

Mr Long confirmed that all Plots were occupied; Notice had been served on one tenant.

The Plots were in good order; again the Site was regarded as the Best in the Inter-Site challenge.

He indicated that a number of the Tenants helped with the Site generally and thanked the Town Clerk’s Assistant for her administration.

RESOLVED: That a change is made to the Order of Business to allow for Item 13 to be considered before Item 11, allowing for the Budget recommendation to inform the Rent Level decision.

Concern had been raised regarding the proposal of running a budget with a deficit.

The Clerk referred Members to the Boundary / Tree works report that provided for works within twelve months for the Tricks and Handy Cross Allotment Sites. He noted that works for the period twelve to twenty four months (2023/24) was largely confined to the Pollyfield Site.

Figures included in the Draft Budget deficit provided for a contingency and possible boundary / tree works for Tricks / Handy Cross. Generally there should not be a draw to the £3,000.00, simply a safeguard; the Committee can amend the figures accordingly.

RECOMMENDED: That the Marland and Handy Cross Allotment Sites remain self-managed under the same terms as before with a (three year) review in September 2025.

RESOLVED: that Wills Tree Services be invited to conduct boundary / tree works, in accordance with their quotation, for the Tricks and Handy Cross Allotment Sites.

Members having made recommendation on the Draft budget, it was:

The Chairman, having established that there was no further business to discuss, thanked the Members for their attendance and concluded the Meeting at 7.12 pm. 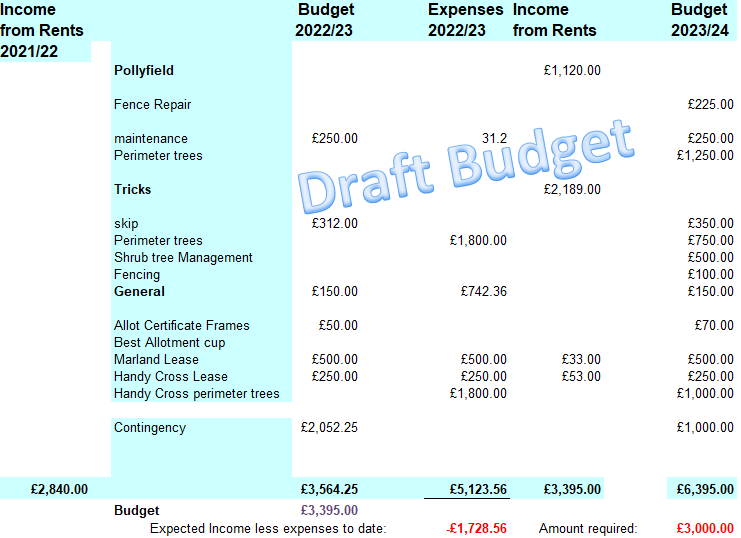