Minutes of the Town Council Meeting held in the Council Chamber,Town Hall, Bideford on Thursday 12 December 2019 at 6.30 pm

Prior to the start of the Meeting the Chairman spoke of the sad loss on the passing of former Mayor (twice) Councillor Phil Pester; called upon the Chamber to hold a minute’s silence – which was respectfully observed.

There were no apologies.

120.      DECLARATIONS OF INTEREST ON ITEMS ON THE AGENDA

There were no participants.

The Minutes of the Meeting held on 31 October 2019 were approved and signed as a correct record.

a.         The Chairman invited Councillor Mrs Hellyer to present her report.

b.         Councillor Mrs Hellyer reminded members that a RNIB Blind Walk would be conducted at 11.30 am on Wednesday 18 December 2019 from Mill Street. Visually Impaired Goggles would be provided to highlight and replicate the challenges that are faced when negotiating street furniture / people.

She advised that DCC + Contractor will be installing “tactile slabs” at the entrance of the Manor car park, the Lundy Office Building and on the corner of the High Street, following the recent resurfacing works.

Councillor Herron highlighted the danger presented by queuing cars in the vicinity of the Zebra Crossing, by the Old Town Post Office. The Chairman noted that this Zebra Crossing was moved twenty-five years ago.

125.      COMMUNICATION BROUGHT FORWARD ON THE DIRECTION OF THE MAYOR

c.           The Mayor of Holsworthy is holding a Civic Service at St Peter and St Paul Church on Sunday 15 December 2019; she has extended a general invitation.

d.           Jubilee Square has had an area cleaned and lacquered; members of the Maintenance Team and Office Staff had been introduced to the Equipment / operation opportunity. He invited members to view the treated area.

Minute.80. Town Entrance Signs; Recommendation. Members discussed the merits of going to the Press advising of the Recommendation that the entrance signs into the Town are not changed.

The proposal was lost. Members chose not to go to the Press.

Councillor Ratcliff called for a recorded vote on the Recommendation,

That in view of the passionate response from the residents of Bideford against the implementation of the Motion, that the entrance signs into the Town are not changed:

RESOLVED: That the recommendation is supported.

The Minutes of the Meeting held on 28 November 2019 were approved and adopted.

Minutes of the Meeting held on 20 November and 11 December 2019 were approved and adopted.

Minutes of the Meeting held on 5 December 2019 were approved and adopted.

The Chairman requested that a letter is circulated to traders / tenants advising on the Market Hall closure in January 2020 (and the rental increase effective, 1 April 2020).

The Minutes of the Meeting held on 29 October and 19 November 2019 were approved and adopted.

The Minutes of the Meeting held on 7 November 2019 were approved and adopted.

Councillor Craigie advised that DCC had not installed a shelter given that the dimensions were short by 10 cm. He spoke of the elderly people of the East-the-Water who use the Bus Stop that affords no shelter or seating, albeit that the facility is offered across the road.

Councillor Bushby indicated that he was happy to support the Motion but expressed concern with the method of attaching the roof structure to the wall. He spoke about the structural integrity and whether the design would be sufficiently robust to withstand wind and snow loadings.

An alternate, free standing structure built on columns would not need permission of a landowner, just DCC.

Councillor Mrs Hellyer confirmed that DCC had looked at the issue last year and that the siting was too narrow.

Councillor J Craigie indicated that he was happy to look at alternatives; he would investigate a design for just a roof.

Councillor McKenzie wondered if the siting could be moved a few feet further up, building on the grass, that would provide a greater width potential. He further asked about additional funding, would £1,500 have to be added to the Precept?

The Town Clerk advised that there was a project cost centre that it could be drawn against.

“To support the Friends of Bideford Play Spaces project termed the 'Pollyfield Pirate Ship' in the following ways:

• write a supporting letter to accompany their reaching communities grant application
• provide the £2,750 funding match for the £25,000 land fill tax grant
• encourage members of the public and councillors to engage with the consultation process to choose most suitable nautical themed play equipment for the Pollyfield Park area.”

Councillor J Craigie gave details of the Deep Moor Landfill grant fund from where parks in both Torrington and Northam had received benefit.

The Chairman indicated that there were S.106 monies still unallocated at TDC.

Discussion followed on the continued development of the TDC Play Strategy, time limit for Landfill grant availability and investigation into whether S.106 monies could be applied for.

Councillor J Craigie indicated that he was content to amend the Motion, that the Council would fund £2,750.00 should an application to TDC for the (S.106) funding be unsuccessful.

RESOLVED: That the Amended Motion is supported.

Councillor Bushby indicated that the Council should send a letter indicating full support.

Members had seen a request from TDC to pay for the new swings that are to be purchased for the Devonshire Park Play area from the monies ring-fenced by the Council for play equipment.

The Chairman reminded Members of the Motion where the Council agreed to provide £25,000.00 (matched by the Bridge Trust) for maintaining / updating park equipment within Bideford.

Councillor Mrs Craigie expressed concern that it is TDC’s statutory duty and that TDC officers can’t obtain TDC funding (whilst their Play Strategy is still being established).

RESOLVED: That the Council support funding of new swings for the Devonshire Park Play area from monies ring-fenced for play equipment.

Councillor Mrs Craigie did not attend the last Meeting where the internal structure was being discussed – taking it from an Association to a Limited Company.

Councillor Johns advised that the next Meeting is scheduled for January 2020.

The Chairman advised that Councillor James had been elected the new Leader and Councillor Mrs Hodgson his deputy.

Councillor Mrs Craigie indicated that consideration was being given to providing incentives to Taxi firms to go green with the potential for Electric Charging Points to be established on the Quay.

Councillor Christie briefed Members on the income, expenditure, charitable donations and grants figures. He spoke about the success of the Business Start-up grants.

The business of the meeting having been concluded the Mayor thanked the members for their attendance at the meeting which concluded at 7.32 pm. 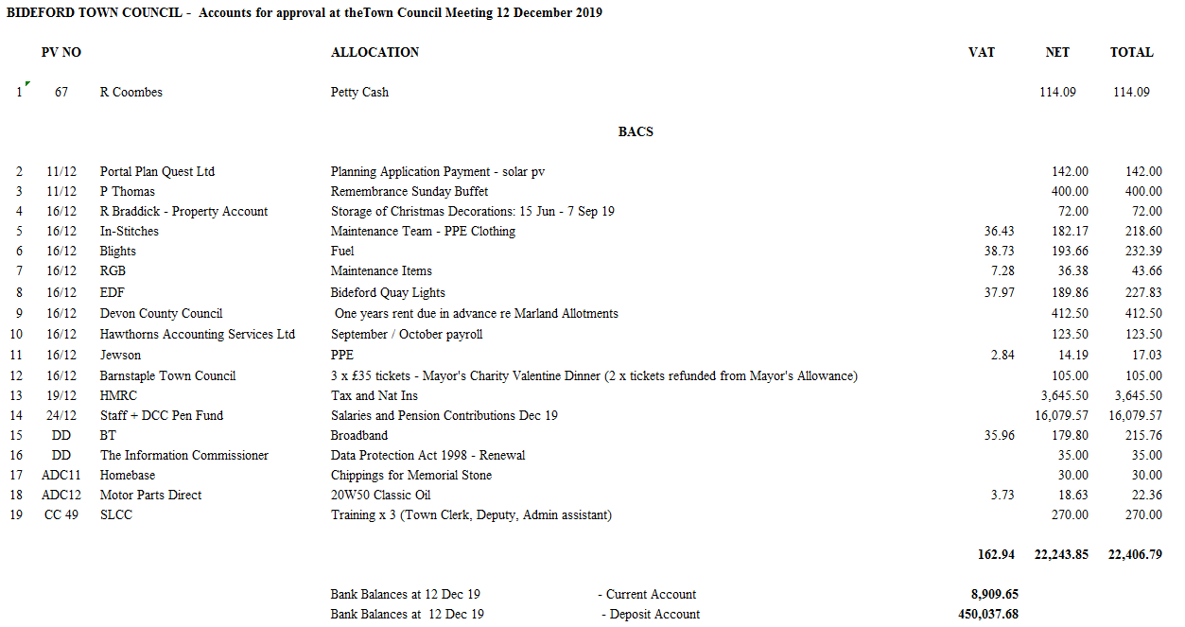