There were no apologies for absence

058.     DECLARATIONS OF INTEREST AND ANY REQUESTS FOR DISPENSATION ON ITEMS ON THE AGENDA

The Town Clerk advised that The Macebearer and Town Mayor along with Councillor Bushby had conducted three very successful Town Hall tours for St. Mary’s school.

The Town Clerk advised that Bobb had returned the grant for Wikked week.

Members chose an illustration from “The Water Babies” to enable the artist to provide a quotation.

RESOLVED: That the Town Clerk contacts Maggie Curtis and asks for a quotation for a circular plaque based on the illustration chosen.

Members discussed the wording for the plaque.

RESOLVED: That the wording for the plaque will be: In memory of all civilians killed as a result of conflict and war. Erected by Bideford Town Council 2020.

The Devon County Council Area Rights of Way Warden has agreed “in principle” permission as long as the fixings do not damage the bridge and that the headroom is not restricted. The Town Clerk will enquire into the feasibility of this proposal (for 2020) with DS Electrical.

Members gave consideration to the quotations received for the Town Planters.

RESOLVED: That the quotation provided by Merry Harriers is accepted

Members considered the storage of the Bideford Bowl.

RESOLVED: That The Bideford Bowl is insured by the Town Council and displayed in the Mayor’s Parlour under the terms requested by The Port of Bideford Regatta Committee.

RESOLVED: That the Honorariums are set at the following levels:

Members considered the response from Northam Town Council on whether to share a Community Warden.

RESOLVED: That Bideford Town Council pursues the employment of a part time Community Warden and that the cost of a part-time position is added to the salary budget for the new financial year.

Members considered a proposal from the TDC Economic Development Officer regarding a funding proposal for the Postcode Gardener.

RESOLVED: That Bideford Town Council supports the funding proposal for the Postcode Gardener.

Members considered what form the VE Day 75 commemoration will take following further information from the Pageant master on the timings of specific events throughout the country. It was agreed that the Last Post should be played on Friday 8th May 2020 at Chudleigh Fort at 2.55 pm. From here the Youth Pipe Band will be asked to play Battle’s O’er at 3pm and march over the old Bridge up to the Pannier Market. A celebration event will be held in the Pannier Market during the afternoon, followed by a Cry for Peace by The Town Crier at 6.55 pm, and the Church Bells ringing at 7.00 pm.

There will be Church Services of celebration and commemoration held nationally on Sunday 10 May 2020 at 10.30 am, and The Town Council will join St Mary’s for their service.

RESOLVED: That the ideas suggested are raised at the Tourism and Market Management Committee meetings next week, under Chairman’s items, with a view to progressing the organisation of VE Day 75.

Councillor Bushby advised that the shortlisting for interview to fill the vacant Maintenance Operative position has taken place. 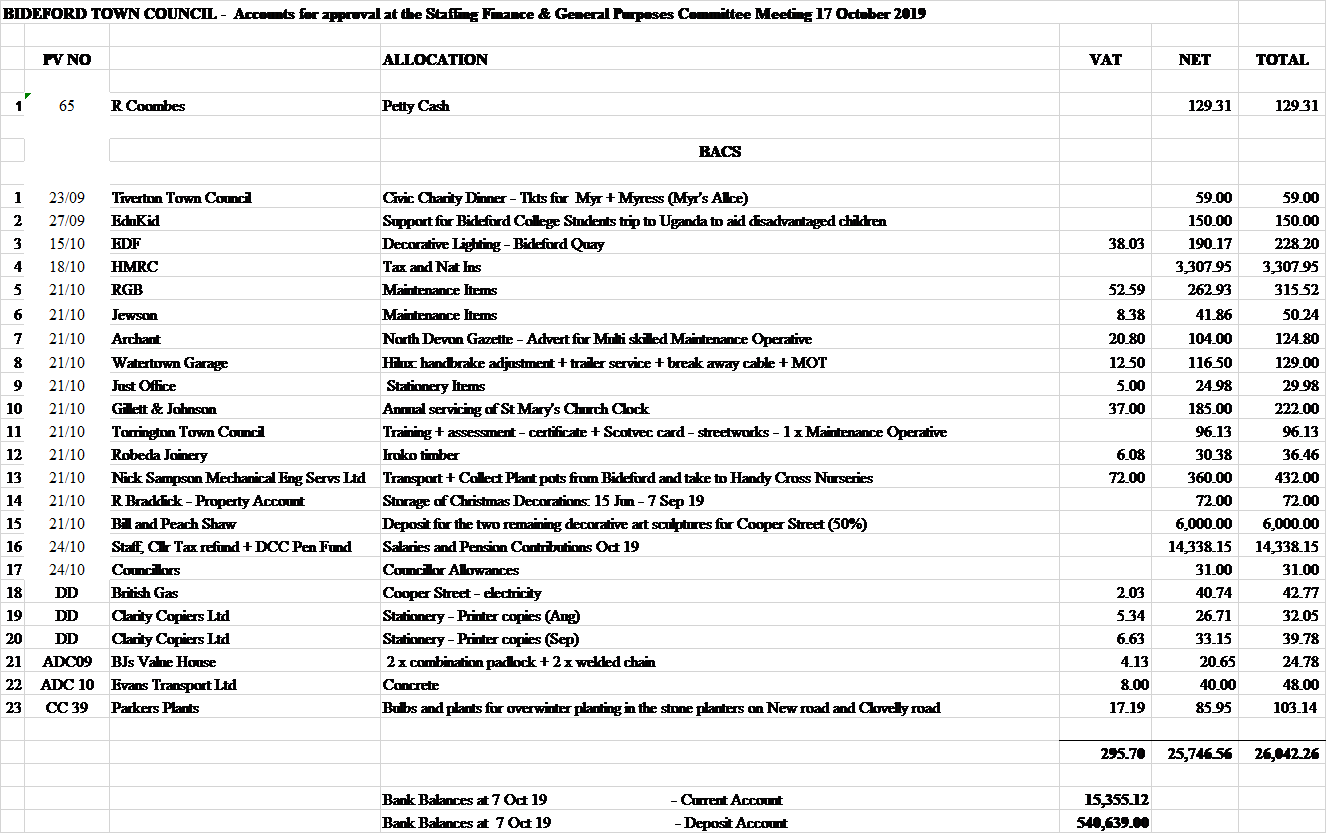