As a service we are back to business-as-usual following Covid.

Keeping the fire appliances fully crewed at Bideford is still my number one priority to be able to attend emergency incidents not just in the Bideford area but also in the wider community.

We have 20 firefighters at Bideford with three new recruits and another starting their basic fitness and having passed their online examinations.

We have had an extremely busy summer due to the dry and hot conditions attending many incidents, exhausting resources. We had 57 calls in July most of these were fires including houses, costal, forestry and woodland/hedges. Some of these unfortunately were due to discarded barbeques and bonfires spreading out of control.

The most recent substantial fire was at Specsavers in the High Street which also involved Costa Coffee, the block of flats to the left and The Quay dentist Practice. This was a 10 pump Multi agency incident with a monitoring process over several days checking for fire spread. Good intervention from the Bideford crews who attended first preventing fire spread to adjacent properties and ensuring all persons were evacuated in nearby properties. Bideford crews spent over 11 hours that day on the fire without any substantial breaks.

We managed to work with the adjacent businesses involved to enable them to open the following day.

Our other biggest risks are the river Torridge, Appledore shipbuilders and several large factories/warehouses.

We are still providing drivers with additional skills to assist the ambulance service crews due to their ever increasing demand, we currently have four at Bideford.

There are currently no high level Fire Safety Enforcement Action taking place on any businesses in the Bideford area. We are continuing to audit high risk premises such as Hospitals, care homes and large factories.

We have just launched our winter fire safety campaign called ‘Save safely’.  We’ve created this campaign in response to the cost-of-living crisis, to encourage people to think about fire safety when it comes to saving money.

You should have working smoke alarms on every level of your home, and a carbon monoxide alarm in every room where fuel is burned (this includes gas cookers, open fires, and log burners).

Keep them at least one metre (3.3ft) away from everything. Never dry clothes on heaters.

If you must use them, put them in proper fire-retardant holders, and keep away from anything that could catch fire

With energy prices rising, the fire service knows you may need some help staying warm.

If you need to heat only a small area of your home, a portable heater is more efficient and cost-effective. The fire service recommends an electric oil-filled radiator (pictured) rather than any other type of heater.

Heaters can be a serious fire hazard, they should always be placed (at least one metre) away from curtains, bedding and upholstery and switched off and unplugged before you go out or go to bed.

Candles are not a safe or efficient way to heat your home.

Have your chimney swept before the first fire, and then sweep it at least once a year (and every three months if you’re burning wood).

Only burn seasoned wood. Other wood may have moisture which can create tar in the chimney. This is highly flammable and can lead to chimney fires.

Other ways to keep warm

Never use wheat bags in a bed.

Book in for a free home fire safety visit 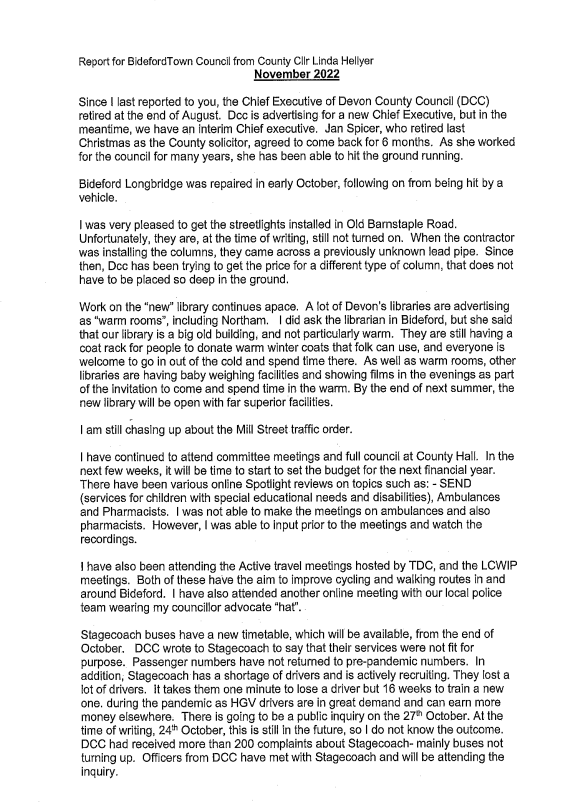 Please see below a briefing from DCC which goes into a lot more detail than my original report for the meeting tonight.  Councillors might like to have this as well as the report that I sent earlier, as things have changed since I wrote it. 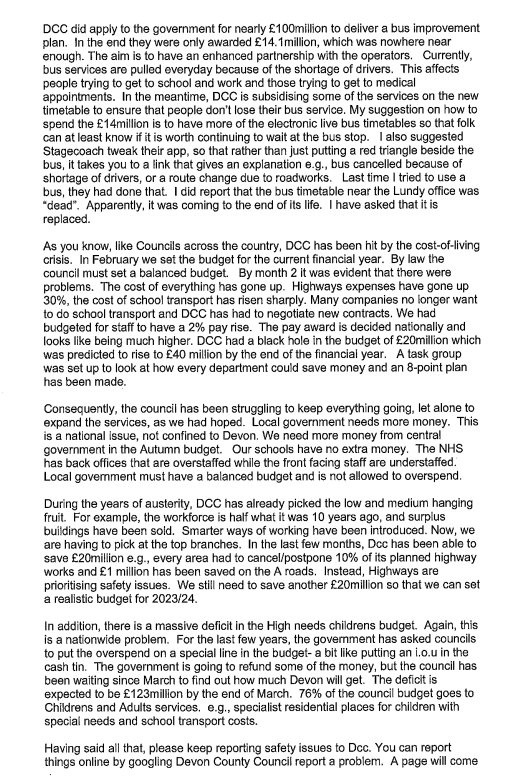 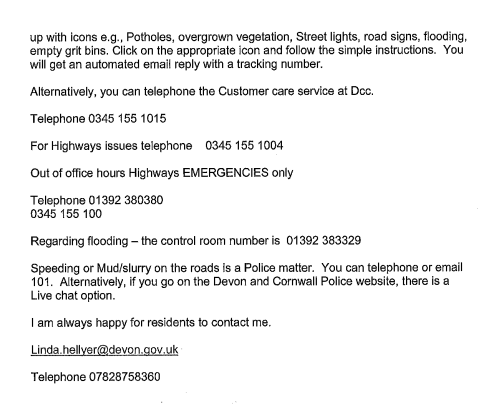 Devon County Council provides vital services to over 800,000 people from a net revenue budget of £630 million. Devon has the largest local road network in the country and a larger proportion of older people compared to the national average. In the eleven years up to and including 2021/22 the authority’s core funding from Government reduced by over £180 million or 72% in real terms. The County Council ended the 2021/22 financial year with a £3.3 million overspend, the first time this had happened in 30 years. We are not alone. New research by the County Councils Network shows 17 English authorities face a combined deficit of more than £500 million in 2023/24.

This year, next year – the mounting overspend

The uplift in funding provided by last year’s Spending Review has been wiped out by rising inflation and increasing demand in Adult Social Care and Children’s Services. It reflects unprecedented pressures throughout local government. The County Council - already budgeted to make £36 million of in-year savings - must somehow find a further £37 million by the end of March.

Inflation is in excess of 10% this year, reflected in ever increasing prices for supplier services and impacting on construction costs where inflation is even higher. Some 80p in every £1 the Council spends is with external suppliers. This is particularly the case with social care services which are already under huge pressures and recruitment challenges.

In 2023/24 the savings required will be £75 million. Savings on this scale mean a choice between previously unthinkable cuts to vital local services or financial failure within 12-24 months. Service cuts under serious consideration include but are not limited to:

The risk of reductions to a bare minimum level of service required by law is now very real.

In addition, like many councils, we face a worrying SEND overspend in the Government’s Dedicated Schools Grant driven by rising demand for special needs places and increasing cost of placements in independent schools. In a number of councils, including Devon, the Government has instructed that the deficit be placed in a special adjustment account and rolled over each year in accordance with a Statutory Override which is due to expire after this financial year.

In Devon’s case, 41 children requiring additional special needs placements in independent schools since September, the start of the new academic year, means our projected overspend is currently showing a rise of over £2 million to £37.2 million which would take our accumulated deficit to £123.8 million at the end of this financial year. This is well beyond our reserves balance. If the deficit were required to come onto the Council’s accounts, it would place Devon in immediate financial jeopardy.

The County Council is continuing to take action to reduce the overspend as much as possible. Our own special school capacity is planned to increase by 129 places this year which will reduce the need for more expensive independent placements. We are directing mainstream schools to provide more placements where appropriate and also exerting firm management on the Education, Health and Care Plan process to ensure quicker decision-making, improved communication with families and approving plans only where it is really necessary and in line with statutory guidance.

However, just like other councils, we do not have the money to overcome a total deficit of this scale. At the time of writing, we are awaiting a decision from Government on whether half the deficit will be met from the national Safety Valve Fund and if the County Council will be allowed to spread the cost of repaying the remainder from additional borrowing. We urgently need a decision or at least the temporary respite that Government intends to roll the deficit forward a further year.

We’re asking Devon MPs to help with the following:

The Chancellor has warned all Government departments to look for further efficiency savings. If that translates into funding reductions for local government coming on top of soaring inflation it will create a perfect storm in council finances. We are supporting the County Councils Network and LGA in lobbying Government for additional funding for local government. The Leader, John Hart, is asking Devon Members of Parliament to support Devon with the following actions.

The following are four critical actions Members of Parliament could lobby for which would help protect public services to their constituents.

The County Council would welcome every opportunity to work collaboratively with Members of Parliament – collectively and individually – to lobby Government and ensure we can continue to deliver the services our residents – your constituents – rely on. We are happy to meet Members of Parliament virtually or in person, in Devon or in London, whichever is easier.