Minutes of the Decarbonisation and Environment Committee Meeting held via Zoom, on Tuesday 25 August 2020 at 6.32 pm

No apologies were received.

52.    DECLARATIONS OF INTEREST ON ITEMS ON THE AGENDA

The Minutes of the Meeting held on 7 July 2020 were approved and signed as a correct record.

The Chairman invited Councillor Herron, in a change of item order, to update the Committee on the Woodland.

Councillor Herron advised that the Dimpsey Woods website would be up and running soon.

He spoke of the “Edible Londonderry” food planting initiative, involving the Post Code Gardener, that set to start.

Debate followed on a biosphere rural fruit tree planting project and the border lines that could see benefit to parts of the Bideford Parish.

Councillor Mrs Hellyer noted that there was an abundance of acorns in the Oak Trees above Tesco: Manteo Way / Mines Road.

On questioning Councillor Herron confirmed that they could be planted in pots, on their side, covered in soil; they benefit from frost and have a 100% germination success. He noted also that fruits and hawthorns have blossomed early this year.

The Chairman advised Members on the Government’s New Green Home Grant scheme that provides homeowners with the opportunity to benefit from vouchers up to £5,000.00 towards the cost of energy efficient improvements. He believed there was additional funding up to £10,000.00 for those on low incomes and fuel poor. DCC will work with accredited suppliers in the roll out of the initiative.

He noted that bike repair voucher scheme ran out in a day.

Councillor Mrs Hellyer explained that everything is in place for the Nappy Library to operate, however, COVID-19 has delayed any activities.

The Chairman suggested that an invitation to a Co-Cars representative could be made to for a presentation at the next Meeting.

Councillor Herron extolled the virtues of Electric Motorbikes with the potential for speeds up to 60 mph; the Chairman noted that licensing would restrict the speeds to 30 mph.

The Chairman advised that Lottery Fund (application) monies remained tied as a result of COVID-19.

He advocated working with the Bideford Carbon Cooperative in a part fund / crowd funding project that would see the Community buy into the Plan for Carbon neutrality by 2030.

The Chairman introduced Mr Dylan Bilson to speak on behalf of the Bideford Carbon Cooperative.

Mr Bilson addressed the Committee by reading a document proposal that is attached and forms part of these Minutes.

Councillor Mrs Hellyer advised that a licence from DCC would be required to operate from Jubilee Square.

She questioned the cost, insurance cover and whether there would be a cadre of volunteers running the Hub.

Mr Bilson confirmed that there would be costs including administration, leaflets, his involvement, stalls, and information boards. They are a registered community benefit society and non-political.

Members noted that the Council owned a gazebo / marquee.

Mr Billson thanked the Committee for inviting him to make the presentation.

The Chairman asked Members to consider ideas for rewards to encourage take up of a crowd funding initiative in support of producing the Decarbonisation Action Plan. He noted that former Councillor Joe Day had worked extremely hard to produce the excellent result.

Mr Billson indicated that environmentally friendly products were being developed.

RECOMMENDED: That the Council match fund, up to a maximum of £5,000.00, those monies raised as a result of crowd funding by the Bideford Carbon Collective, in support of producing the Decarbonisation Action Plan for Bideford.

The Chairman had extended an invitation to the Environment Health and Community Safety Officer to address the Committee, who was unable to attend. He hoped that they would be able to attend a future meeting.

Councillor Mrs Craigie confirmed that she had attended the inaugural TDC Decarbonisation Working Group meeting, which had been eighteen months in gestation. They will be convening on a monthly basis.

She made reference to the work of the Officer in the past; they have no policies.

Discussion at the first meeting included incorporating rules into the taxi licenses providing for ALL taxis to be electric by 2030.

Councillor McKenzie indicated that there are incentives to encourage the take up of ‘E’ taxis; he questioned whether local policy could dictate a private companies business model.

The Chairman wondered whether an increase in scale differential could be introduced (that would make the license more attractive to an ‘E’ fleet).

Councillor McKenzie did not believe that a wholesale changeover (to electric) was currently viable.

Councillor Mrs Hellyer stated that ‘E’ Cars cause pollution, in their manufacture (including batteries and their disposal), drawing on electricity generated from fossil fuels and concluded that they were not perfect.

The Chairman did note that their use as an alternative to the combustion engine does improve the local air quality. Batteries are reconditioned, their present life is ten years albeit that they do not fully recharge with subsequent charges.

Councillor Herron declared that ‘E’ vehicles are not the way forward. With the advent of 10,000 more homes to be built with an increase of 15,000 vehicles in the area car sharing and busses were the answer.

The Chairman explained that no one initiative is the answer, but options can be provided and maximised.

Councillor Mrs Craigie returned to her brief advising that TDC would not provide recycle bins on Jubilee Square as they had no one to empty them. Northam and Torrington had both been told the same. (The Environment Health and Community Safety Officer, who was clerking the Meeting, was not aware.)

Councillor Mrs Craigie indicated that many further issues were discussed. They would like to see changes to the Wind Turbine policy. It is hoped that the next three meetings will see officer attend:

1.   Planning: Changes to policy and how to make changes.
2.   Estates: Encourage the building portfolio to become more eco-friendly.
3.   Waste Management: Recycling, update on the Biodiversity facilities in Holsworthy.

She noted that the Working Group did need advice on how to measure carbon footprints.
Councillor Mrs Craigie spoke about setting up a forum encompassing County, District, Towns and Parishes to share knowledge and promote best practices, working together without independent duplication of effort.

Further discussion developed on recycle bins, the withdrawal from Victoria Park and Jubilee Square, those based on the Tarka Trail by the bridge behind the Hotel that are operated on a self- help basis. Councillor Mrs Hellyer noted that the Bideford Town Centre Partnership had discussed the issue and were looking into those bins that are operated at railway stations.

Both Councillors Mrs Craigie and Hellyer reiterated the need to share ideas; the Chairman indicated that the Agenda could be more widely distributed.

The Chairman thanked the Members for their attendance and support. He concluded the Meeting at 7.40 pm. 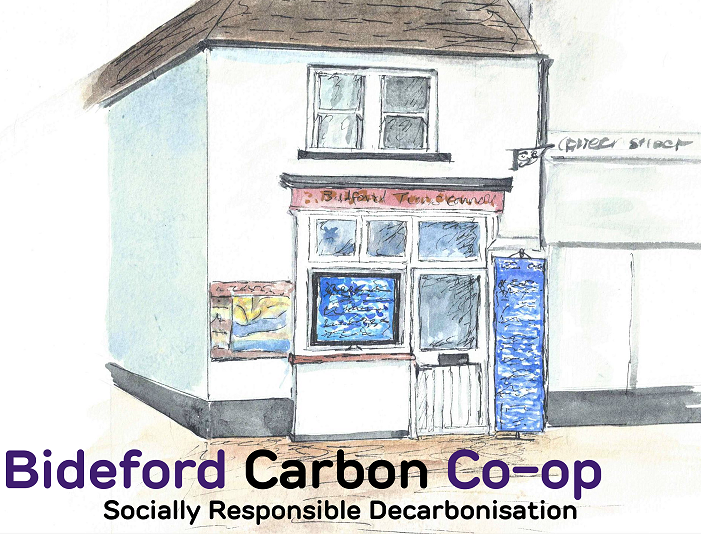 I’m aware the town council has already agreed in principle the Carbon Hub in jubilee square but I’ll go over the advantages of the carbon hub.

The town council have declared a climate emergency but this needs to be actioned on, we’re incredibly keen for this to be the first decarbonisation plan that is community led, being a town council it’s important that this is from the ground up due to the challenges of enforcing or funding action across the board.

Bideford Carbon Co-op and The Carbon Hub is the perfect vehicle to deliver on the surveying of residents on their ideas for decarbonisation, as well as ensuring accessible education and information on the climate crisis. This effort will continue to show Bideford is leading the way in Devon on getting the community involved with solving the difficult problems we face as a town.

We’re keen to take this on to enable the delivery of the decarbonisation action planning process and remove some of the burden of responsibility from the town council, acknowledging the huge amount of work especially post pandemic the town council already manages.

However obviously there’s costs to carrying this out, from the cost of printing and distributing paper surveys, information leaflets and educational display boards for the hub, to core staff costs and insurance.

We’ve developed proposals around a budget of £10,000 but I understand this no small amount and that’s why the proposal we’re putting forward is to open a crowd funder and ask the Town Council to match the money raised by that crowdfunder up to £5,000. This means that the council is effectively doubling the impact of its resources by enabling the community to contribute via a crowdfunder.

This would give the Carbon Coop the responsibility to organise and raise the other £5,000 through the crowdfunder. Relieving half of the financial stress from the town council and meaning we can ensure early community involvement and prove the clear public desire for climate initiatives. There is even the possibility that the crowdfunder could exceed the target to enable us to go beyond the level of community engagement possible from a hub on Jubilee square every Saturday and the delivering of surveys to every household in the town.

We intend as far as possible to upskill volunteers to provide advice and signposting so that other initiatives being undertaken by the District Council, County Council and Neighbourhood plan Committee can be effectively communicated to the people of Bideford via the Hub.