020.      DECLARATIONS OF INTEREST AND ANY REQUESTS FOR DISPENSATION ON ITEMS ON THE AGENDA

Councillor D Bushby declared a non-pecuniary interest in agenda item 9. (Chairman of Conservative Club where the buffet is served by independent staff).

No items were raised.

Councillor Wootton questioned item 23 (Roundup Provantage Professional). Members discussed the usage and asked the Clerk to make enquiries with Frome and Stroud Town Councils regarding what product they used, so that the Committee may consider alternative products.

The Town Clerk has submitted a pre-planning application enquiry to Torridge District Council and the response was circulated to Members. Councillor Christie suggested an alternative location for the plaque would be the Art school wall, next to the existing plaque which depicts the former railway. The Clerk was asked to contact Devon County Council (enclosing a photograph of the existing plaque in situ), and the Art Centre, to ask for permission to site a plaque on their wall.

Advice has been sought from the parishioner submitting the presentment. His advice was to contact the Holocaust Memorial Day Trust, although he also said he would like to see a small ceremony organised. Members discussed the wording of the plaque and agreed it should commemorate all the civilians who had died during various atrocities. The Clerk was also asked to make enquiries with John Short.

RESOLVED: That a plaque dedicated to civilian deaths is explored, and that the Clerk makes enquiries with Mr John Short regarding the plaque.

Councillor Bushby said that he thought that the present war memorial was in the wrong position, and would be far better situated if it was next to the flag pole. He would raise this for discussion at a future meeting.

Councillor Mrs Craigie asked who was responsible for the benches and the Town Clerk advised that they were owned by Devon County Council.

RESOLVED: That The Town Clerk will ask Devon County Council if they will pay for the materials if the Maintenance Team undertake to repair them.

Councillor Wootton also suggested that the Royal Hotel be asked to sponsor a bench.

That this Council initiates, promotes and advertises a bi-monthly opening of the official rooms here in the Town Hall, for members of the public to come along for organised Tours. |This would enable the electorate and visitors with a Bideford connection to see the Town’s heritage and treasures. This initiative to be extended to the local schools.

RESOLVED: That this presentment is actioned.

RECOMMENDED: That the policy provided by Zurich on a three year basis is accepted.

Members considered the level of contribution to be made by The Town Council to the Royal British Legion towards the buffet served on Remembrance Sunday.

RESOLVED: That Bideford Town Council makes a contribution of £200 towards the Remembrance Sunday buffet.

Members considered what form the VE Day 75 commemoration will take following the resolution from Full Council to support involvement.

Members agreed that a ceremony is held in Victoria Park on 8 May 2020, with a procession going from the Park, and back to St. Mary’s Church. The route will be along the pavement, in order that a road closure is not required. A Maintenance Team Member will be asked to stop the traffic briefly so that the procession can cross the road from the park to the Pill safely. It was suggested that the Royal British Legion, Youth Pipe Band and St Mary’s Church are contacted for their assistance. The organisations who generally partake in The Town Council parades as well as the Chamber of Commerce and BOBB should also be invited to join in the commemorations.

RESOLVED: That a ceremony is held in Victoria Park on 8 May 2020, with a procession going from the Park, and back to St. Mary’s Church. The route will be along the pavement, in order that a road closure is not required. Local organisations will be invited to join in the commemorations.

“The provision of a bench on the large grassed area at Londonderry.”

Members discussed who owned the grassed area at Londonderry, and it was felt that this is Torridge District Council. The Clerk will seek permission from them to place a bench on the land. Councillor Bushby will speak to the resident who cuts the grass, regarding the best position for the bench.

RESOLVED: That the motion is supported.

The Town Clerk advised that joint training had been arranged for one of the Operatives, together with Northam Town Council.

The business of the meeting having been completed, the Chairman thanked the members for their attendance and the meeting concluded at 7.23 pm. 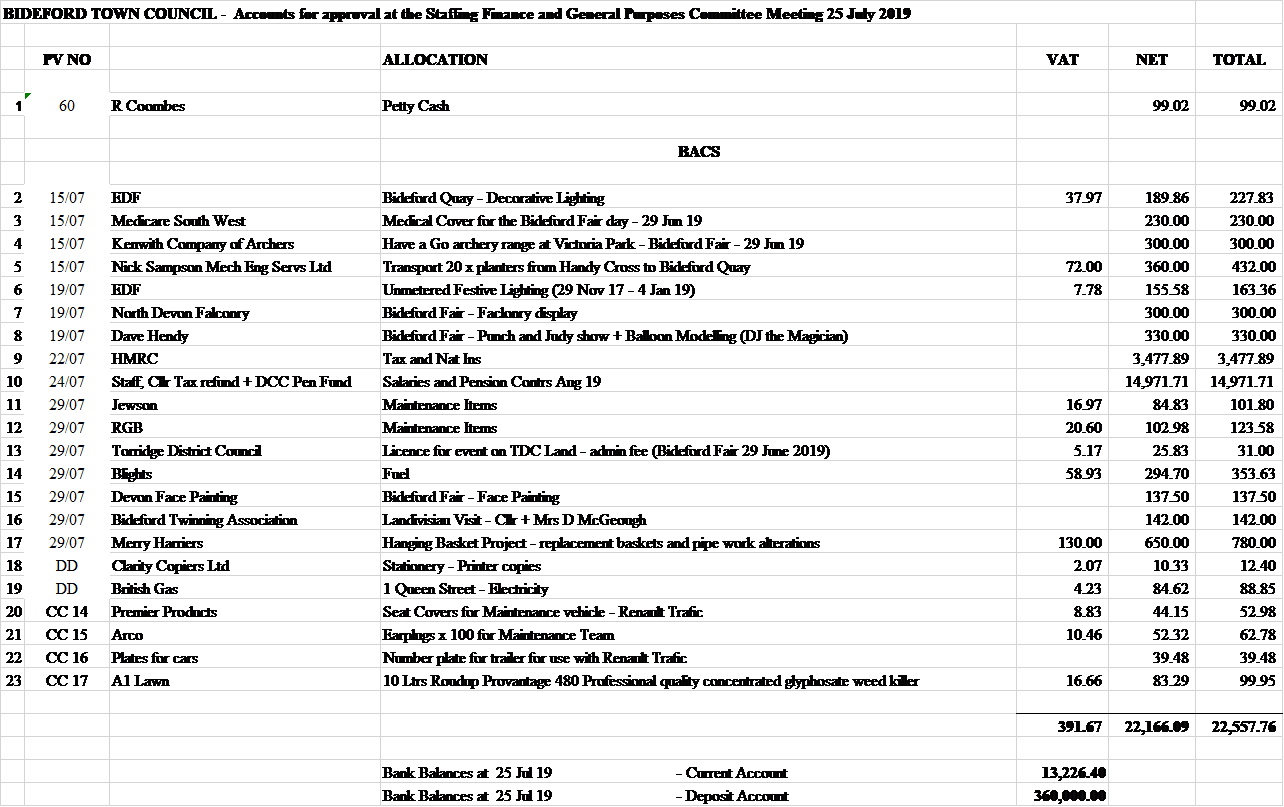