(As The Chairman, Councillor Bushby had been delayed, Councillor Mrs J Gubb (Vice-Chairman) took the Chair until his arrival at the meeting.)

036.      DECLARATIONS OF INTEREST AND ANY REQUESTS FOR DISPENSATION ON ITEMS ON THE AGENDA

RESOLVED: That the Internal Finance Inspector’s Report for the period 1 April – 30 June 2019 is approved.

Councillor Ratcliff was thanked for his work as Internal Finance Inspector.

(Councillor Bushby arrived at the meeting, and took the Chair).

RESOLVED: That the sum of £150 is awarded to the Bideford College student to assist with funding the trip.

(Councillor McKenzie arrived at the meeting.)

The Town Clerk advised that she now has permission to site a plaque on the wall of the Art Centre. It was agreed that she would take out a copy of “The Water Babies” from the library so that an illustration can be chosen to be depicted on the plaque. This will enable the artist to provide a quotation.

The Clerk provided the costs of a memorial stone by John Short.

RESOLVED: That the cost of £775 & vat for a plaque mounted on Beam stone is approved. The exact wording for the plaque will be agreed at the next meeting.”

The Town Clerk advised that The Highway Officer had said that the benches are down for replacement, but she was waiting to hear the timescale. It was agreed that this would be reported at the next meeting.

The Town Clerk was asked to ask Devon County Council “in principle” permission.

“That this Council writes to Stagecoach Bus Company regarding the poor bus service East the Water compared to the west side, to bring equality to both sides of the river, i.e. Sundays and evenings services.”

Councillor Mrs Hellyer advised that she had contacted Stagecoach about the poor bus service and had been told that further services, beyond what is already available are not viable. The Committee agreed that they could not influence the service provided by Stagecoach further and that the Presentment be discharged.

“That this Council writes to DCC to request a mirror for the right turn out of Grange Road into Torrington Lane to help drivers with a virtually blind entrance. That this Council considers funding for this work to be carried out.”

Councillor Mrs Hellyer advised that she had contacted DCC to request a mirror for the right turn out of Grange Road into Torrington Lane and had been advised that due to liability issues, DCC do not provide or allow such mirrors. The Committee agreed that they could not influence this decision further and that the Presentment be discharged.

Members considered the request from One Bideford for a dashcam to be purchased for each of the Town Council’s Maintenance Vehicles.

RESOLVED: That a dashcam is purchased for each of the Town Council’s Maintenance Vehicles.

Members considered a request from the Carnival Committee to use the Town Council Maintenance vehicle to pull a carnival float on September 14th 2019 for the Bideford Carnival, September 21st 2019 for the Barnstaple Carnival and 28th September 2019 at the South Molton Carnival.

RESOLVED: That the request from the Carnival Committee is approved and that the appropriate additional insurance is purchased.

Members considered correspondence from Devon County Council regarding the installation of the Welcome to Bideford banners. Members expressed disappointment that the banners could not be installed, and discussed alternative possibilities. The Chair advised that the banners were at the end of their life, and if the initiative were to continue, both new banners and bespoke poles would be required.

RESOLVED: That the grant criteria remain as currently stated, and that an additional box be inserted into the grant form to read: “Please state (if appropriate) whether your group has considered your environmental impact and what measures you are taking to reduce your carbon emissions.”

RESOLVED: That the draft London Bridge protocol is adopted, the appropriate symbols of mourning are purchased, and the Burton is approached to enquire whether they would be able to house the Book of Condolence during the signing period.

The Town Clerk advised that the RBL Bideford Branch is not currently active. They are however appealing for new Members. Lord Burnett will not be attending Remembrance Sunday. The Town Marshall will read The Ode of Remembrance.
Wreathes should be ordered direct from the National branch. The Town Clerk advised that without an RBL contribution to the post-service buffet, the available funding would be halved.

RESOLVED: That The Town funds the post-service buffet in its entirety at a total cost of £400.

Members re-considered what form the VE Day 75 commemoration will take following further information from the Pageant master on the timings of specific events throughout the country.

RECOMMENDED: That the Town Clerk circulates the official event timings prior to the next meeting, and that it recommended to Full Council that the previous recommendation for a parade is withdrawn, as this probably will not fall in well with planned national events.

“To re-site the War Memorial next to the flag pole in Victoria Park.”

Councillor McKenzie seconded the motion on the proviso that some form of matting is provided in the vicinity of the War Memorial. Councillor Mrs Gubb suggested that a public consultation be held as the last time it was suggested that the Memorial be moved, the idea did not pass the public vote. Other Members however felt, that the idea had previously failed due to the high cost of providing a new Memorial, whilst this motion was simply to move the Memorial and not to replace it. The current motion would only incur a modest cost. Members were very keen that geotextile matting is hired for Remembrance Sunday as this area of the park can become very wet. It was suggested that consent will be required from the Royal Marines and Torridge District Council.

RECOMMENDED: That the motion is supported with the proviso that matting is provided in the vicinity of the War Memorial.

Members discussed the Membership of the recruitment team for the new maintenance Operative.

Members received an update on the tasks undertaken by the Maintenance Operatives and noted the report. Councillor Ratcliff detailed an issue he had reported to the team and commended them on the speed and efficiency with which the problem was resolved.

The Town Clerk was authorised to organise the staff training she had requested for the Maintenance Team and Office staff.

The business of the meeting having been completed, the Chairman thanked the members for their attendance and the meeting concluded at 8.00 pm. 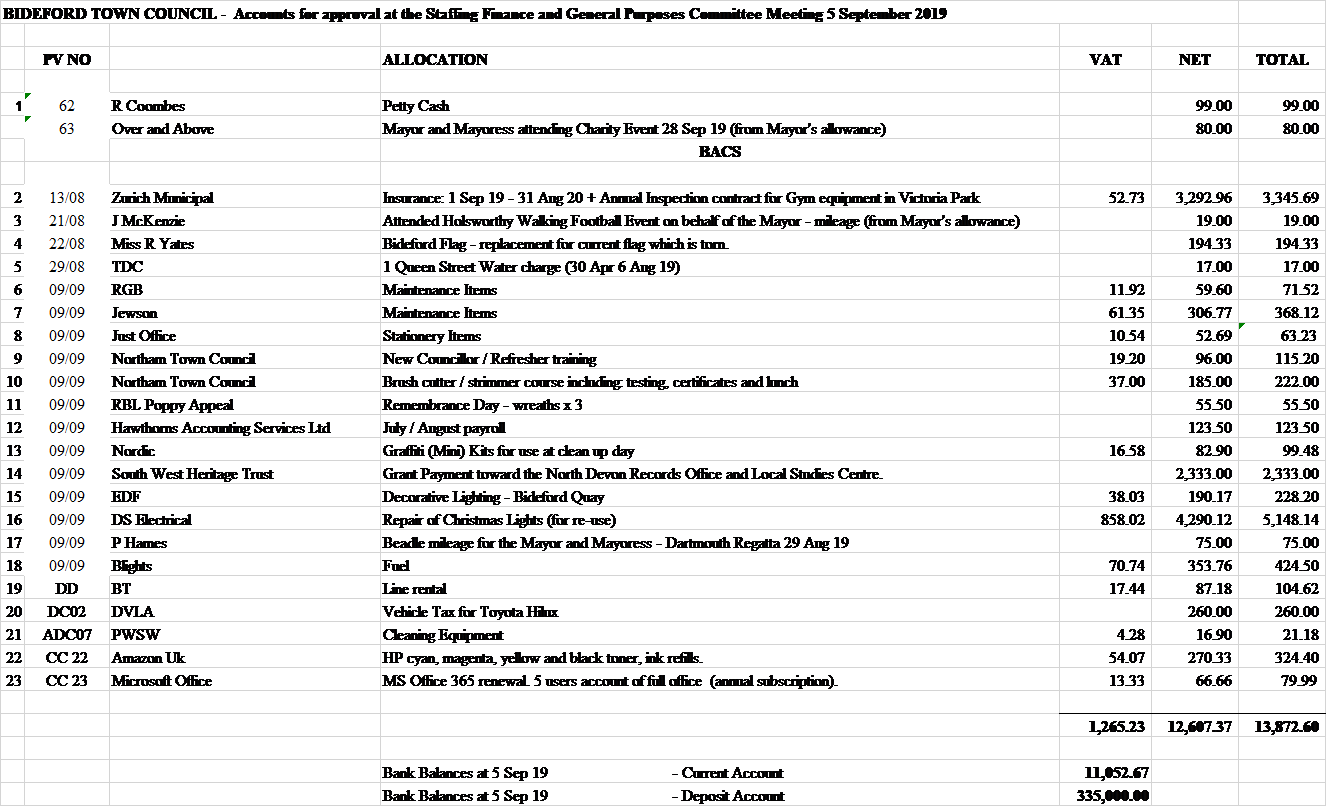