Minutes of the Allotments Committee Meeting held in the Council Chamber, Town Hall, Bideford on Thursday 15 October 2020 at 6.01 pm

22.    DECLARATIONS OF INTEREST ON ITEMS ON THE AGENDA

The Minutes of the Meeting held on 25 September 2019 were approved and signed as a correct record.

The Clerk had spoken to the Chairman of the Association prior to the Meeting.

He advised that the Site was running smoothly. They will be introducing a new wildlife area soon. A number of the tenants had introduced ponds to their gardens – there are an abundance of newts; it is a very “green” site. The tenants remained committed to their plots during the period of lockdown and have everyone has been “brilliant” in relation to following the directives and socially distancing.

b.     Lease - To give consideration to the renewal of the Self-Management Tenancy agreement, effective from 1 September 2021 and to make a recommendation to Council.

Members had sight of the Lease with a view to renewal of the Self-Management Tenancy.

Members discussed what Councillor Lawrence believed to be an inequitable arrangement that saw the Pollyfield and Tricks allotment rental payments subsidise the Associations. He believed that the Council covered the Associations’ general costs including works to boundaries trees and hedges. He indicated that the peppercorn rent should be changed requiring the Associations to pay the annual rent to DCC (Marland) and the Bridge Trust (Handy Cross) of £500 and £250 respectively. He concluded that the Associations retained their rent.

The Clerk informed members that Site rental payments would need to be paid irrespective of whether the Associations were in place or not.

He explained the role of the Associations in managing and administering their respective sites, the opportunities and responsibilities that it provides and the sense of community generated. Their staffing of applications, arranging visits, raising tenancies, collection of rental payments, general husbandry / self-help work on the site would double the workload and demands of the Council office / Maintenance team were the respective Associations to give Notice to quit. Their work provided much more benefit to the Allotment Community than simply the peppercorn rent.

Further discussion ensued including additional costs. Councillor Lawrence believed the Committee had a responsibility to the Council for funding using Public money.

The Clerk reminded Members that any payment by the Council for works on the Association Sites was considered and resolved upon by the Committee. He cited the removal of an old shed with asbestos boards, perimeter work in the light of illegal entry and tree / boundary work (sums that would seriously challenge the Associations’ ability and desire to self-manage).

Other points included the variance in Allotment rental payments (Committee resolution to increase rents, Associations not obliged to follow), time spent by the office on Allotment activities / administration, the work of the Maintenance Team, especially at Pollyfield and the high cost of waste removal (Pollyfield).

Councillor Heron did ask Mr Long if he would like the Tricks Site to self-finance (take Association status); Mr Long replied in the negative.

Councillor Lawrence proposed that the peppercorn rent should be replaced with the Associations meeting their respective ground rent payments. (Marland £500 and Handy Cross £250). He was seconded by Councillor Mrs Craigie.

The Chairman proposed that the agreements be renewed on the same terms. The proposal was not seconded.

Councillor J Craigie proposed that the peppercorn rent of one pound be replaced with the sum of the number of plots on a given site multiplied by one pound e.g. where Handy Cross has fifty three plots the annual “peppercorn” rent would be fifty three pounds. He was seconded by the Chairman.

The proposal of Councillor Lawrence: (Vote – For: 2, Abstention: 3 Against: 2)

RECOMMENDED: That the Marland and Handy Cross Allotment Sites remain self-managed under the same terms as before except that the peppercorn rent of one pound be replaced with the sum of the number of plots on a given site multiplied by one pound.

c.    To consider and make recommendation to Council upon resurfacing Marland / Westcroft pavement area quotation in accordance with the Lease agreement.

The Clerk explained that the Council’s Lease with DCC provided for the maintenance of the path leading to the Allotment Site in good and proper condition. He spoke of the bi-annual cutting of the hedgerow in accordance with the terms.

He advised that a member of the public had requested that the poor surface be attended to.

He explained that the area was seventy-three metres square but had only one quotation to date (he had hoped to have had a further quotation this week).

RESOLVED: That the Clerk obtain a further comparison quotation and that responsibility is devolved to the Chairman, Clerk and Responsible Financial Officer to authorise the works.

The Clerk had spoken to the Chairman of the Association prior to the Meeting who had provided a report.

He advised that the Site had a full quota of tenants and a health waiting list.

As a result of COVID-19 and the resultant Lockdown the Association had decided to stop all plot inspections. They have now resumed (inspections) and the Site, in general, and the Plots in particular, are in great shape. Three letters have been sent and one Notice to quit served.

They have trimmed all the perimeter hedges; thanks to the kind farmer who lent a tractor and machine (for a fee).

The Handy Cross tenants have similarly followed the Government directives and continue to socially distance.

The Clerk advised that he had visited the Site a number of times with the Chairman and the Maintenance Supervisor. He indicated that a number of tenants had not attended their plots because of shielding, although others did take the opportunity garden.

Letters of encouragement to attend their gardens, had been sent to all plot holders, with the annual correspondence / rent request advising that the Site would be visited by the Chairman / Council representatives at the end of November to inspect the Site. If necessary, warning / Notice letters would follow should plots be in a poor state / need attention.

The Maintenance Team had recovered / rotovated some plots and had worked with the Chairman at clearing rubbish for removal from the Site.

b.    To approve a further removal of waste from the Site.

Members were advised that two six cubic yard skips had been filled (by the Maintenance Team and Chairman) with rubbish accumulated at the Pollyfield Site and removed at a cost of six hundred and twelve pounds. A further skip was needed.

The Site representatives had informed site members, along with posted notices and the annual letter over the years, yet plot holders continued to abuse the facility and not remove non-compostable / household items.

RESOLVED: That an additional skip is hired to finally clear the Site.

c.    To consider and resolve upon removing the waste collection facility from the Site.

The Chairman explained, with first-hand experience, the items that were being left / abandoned that should be removed. She advocated the removal of the facility although there could be no guarantee that there would not be any “fly tipping.” She indicated that part of the facility would be reassigned to house the communal water tank (making it more accessible).

Councillor Mrs Craigie sought reassurance that notices would be in place / tenants would be notified that the facility was being withdrawn.

Mrs Dixon-Chatfield confirmed that laminated signs had been deployed.

RESOLVED: That Skip facility is withdrawn.

Mr Long advised that there are currently four vacant plots. The Site has not had recourse to a skip facility. The Site is looking pretty good, there are more chickens and tenants had helped to creosote the fence.

Mr Long proposed that the rents remain the same and was seconded by the Chairman.

Councillor Lawrence expressed concern about the disparity between the rents for Pollyfield / Tricks Tenants and that of the Associations believed the rents should be reduced in line, to match the others. Discussion continued on the benefits of gardening, encouraging pursuance of the recreation and benefits to the environment generally.

Councillor Lawrence proposed that the rental payments be reduced to twenty five pounds (half for half plots) and was seconded by Councillor Hawkins.

The proposal of Councillor Lawrence: (Vote – For: 4, Against: 3)

CLEANING AND MAINTENANCE BUDGET FOR 2021/22

After a discussion on the needs of the individual sites in the coming year, in the light of the impact of the rent reduction and contingency amounts for boundary trees generally, including the Pollyfield Site and the poor state of the wire fencing at the Pollyfield Site, it was

The Chairman, having established that there was no further business to discuss, thanked the Members for their attendance and concluded the Meeting at 7.52 pm.

DRAFT CLEANING AND MAINTENANCE BUDGET FOR 2021/22 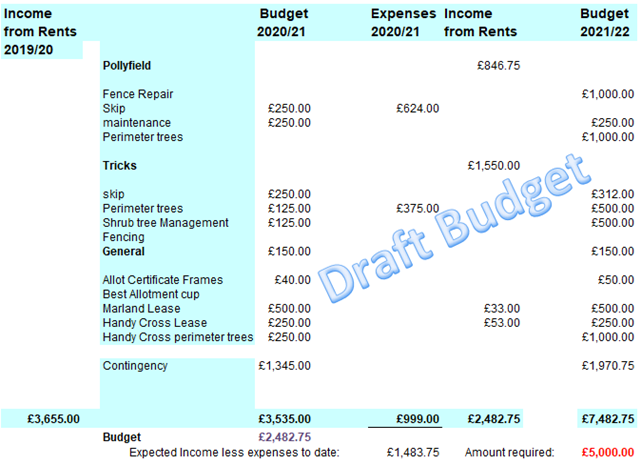