Minutes of the Staffing, Finance & General Purposes Committee held in the Town Hall on Thursday 17 February 2022 at 6.30 pm
PRESENT:
North Ward:
Councillor D Bushby (Chairman)
Councillor P S Christie
South Ward:
Councillor P Lawrence
East Ward:
Councillor Mrs R Craigie
Councillor Mrs J Gubb (Vice-Chairman)
Councillor J McKenzie
West Ward:
Councillor Mrs K Corfe
Councillor D Ratcliff
IN ATTENDANCE:
Mrs H J Blackburn (Town Clerk)
Mrs L Dixon-Chatfield (Town Clerk’ Assistant)
8 Members of the public
115.     APOLOGIES FOR ABSENCE
No apologies for absence were received.
116.     DECLARATIONS OF INTEREST ON ITEMS ON THE AGENDA
Councillor Lawrence declared a non-pecuniary interest in agenda item 9. (Up Close Theatre Trustee.)
Councillor Mrs Gubb declared a non-pecuniary interest in agenda item 9. (She is a committee member of the Bideford Massed Pipes and Drums, Carnival Committee, and Port of Bideford Regatta Committee.)  Councillor Mrs Gubb also declared a pecuniary interest in agenda item 9. (Bideford Bike Show, Bideford No 1 OAPs., Born to Skate, Soap Box Derby, Rotary Club, Christmas Light Switch On, New Year’s Eve Family Party – Work involvement with the aforementioned organisations)
117.    PUBLIC PARTICIPATION SESSION
Four Members of the Torridge Scouts addressed the Committee and talked about the Devon Scout Jamboree they have been selected to attend in South Korea next year.  The event is held every four years in a different country, and they are fund raising to be able to attend the event in 2023.  The event is both educational and designed to promote peace and understanding.  They said that it is a great learning opportunity.  They detailed the fund raising they have done to date, and their future fund-raising plans.
118.    MINUTES
Proposed by Councillor Ratcliff and seconded by Councillor Mrs Corfe, the minutes of the meeting held on 10 February 2022 were approved and signed as a correct record.
(Vote – For: 6, Against: 0, abstentions: 2)
119.    CHAIRMAN’S ITEMS
In light of the Red weather warning for tomorrow, the office staff will be working from home, and the Maintenance Team have been advised to work indoors.  They will be on standby for any emergencies that occur in town.
120.     ACCOUNTS
Members received the list of payments.
Proposed by Councillor McKenzie, seconded by Councillor Mrs Corfe and
RESOLVED:  That the draft list of payments is approved.
(Vote – For: 8, Against: 0)
121.     GRANT CHEQUES
Members considered whether to send out the grant cheques normally presented at the Annual Parish Meeting by post, rather than to require the recipients to attend in person given the current capacity of the Town Hall.
Proposed by Councillor Bushby seconded by Councillor McKenzie and
RESOLVED:  That the grant cheques for 2022 are sent by post to the recipients.
(Vote – For: 8, Against: 0)
122.     CONTRIBUTION TO THE MACEBEARERS’ CONFERENCE
Members considered contributing towards the refreshments at the Mace-Bearers’ Conference which will be held in the Town Hall on 11 March 2022.
Proposed by Councillor Bushby, seconded by Councillor Mrs Corfe and
RESOLVED:  That a contribution of £300 is made towards the refreshments at the Mace-Bearers’ Conference.
(Vote – For: 7, Against: 0, Abstention: 1)
123.     GRANTS TO LOCAL ORGANISATIONS 2022/23
The Councillors then considered each application received and made recommendations to Full Council for the award of grants from 1 April 2023, as detailed in the table below. 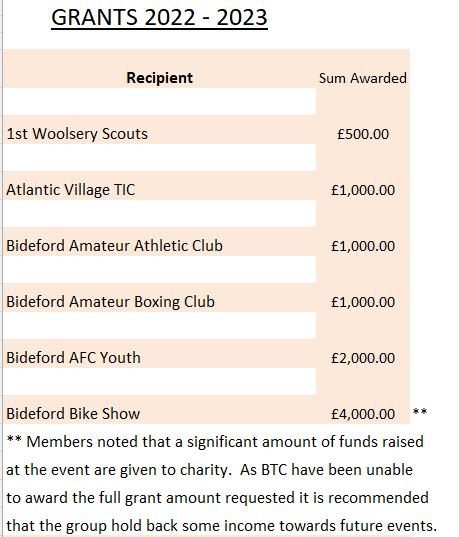 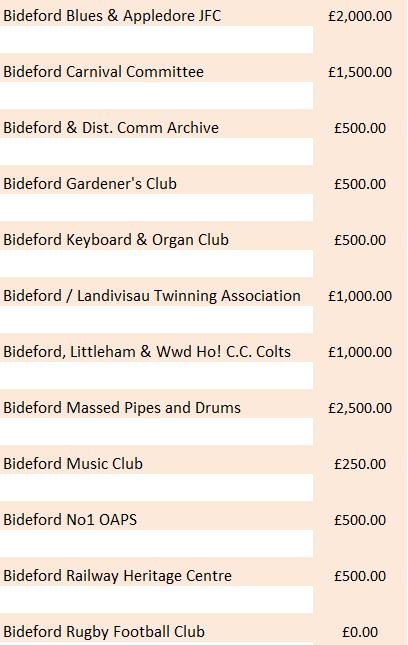 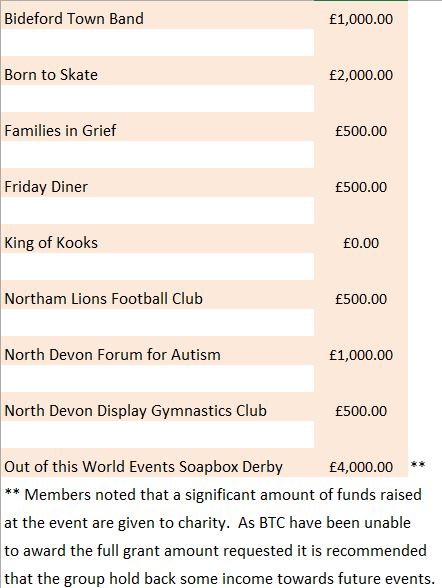 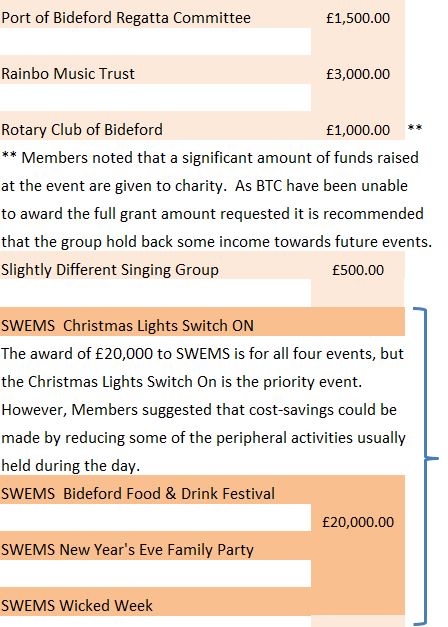 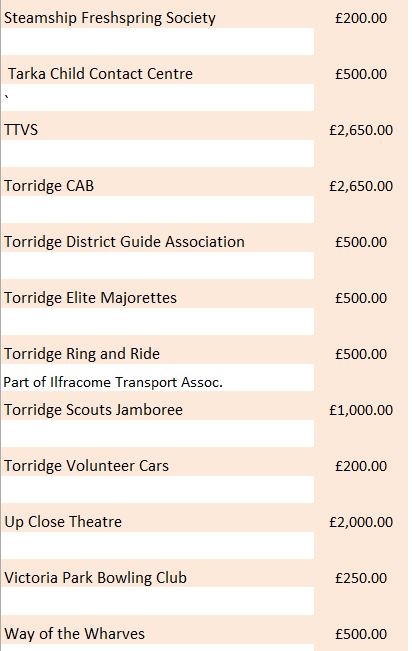 Proposed by Councillor Bushby, seconded by Councillor McKenzie  and
RECOMMENDED: That the grant allocation of £ 66,700.00 as detailed in the above table with a contingency totalling £ 8,300, and making an overall total of £75,000 is agreed by Full Council.
(Vote – For: 8, Against: 0)
The business of the meeting having been completed, the Chairman thanked the members for their attendance and the meeting concluded at 7.35 pm.
< Prev Next >