Minutes of the Market Management Committee held in the Council Chamber of the Bideford Town Hall on Thursday 24 February 2022 at 6.30 pm
PRESENT:
North Ward
Councillor D Bushby
East Ward
Councillor Mrs L Hellyer
Councillor J McKenzie
South Ward:
Councillor S Inch (sub Councillor D Ratcliff)
West Ward:
Councillor C Hawkins
Market Tenants: Ms E Hilton
IN ATTENDANCE:
Mr R Coombes (Deputy Town Clerk)
Mr C Farris (Development Officer)
1 x Tenant.
93.     APOLOGIES FOR ABSENCE
Councillors J Herron (North Ward – personal) and D Ratcliff (South Ward).
94.     DECLARATIONS OF INTEREST AND ANY REQUESTS FOR DISPENSATION ON ITEMS ON THE AGENDA
There were no declarations of interest.
95.     PUBLIC PARTICIPATION SESSION OF 15 MINUTES DURATION
There was no public engagement.
96.     MINUTES
Proposed by Councillor Hawkins and seconded by Councillor Hellyer, that the Minutes of the Meeting held on 13 January 2022 were approved and signed as a correct record.
(Vote – For: 3, Against: 0, Abstention: 2)
97.      ACCOUNTS
It was proposed by Councillor McKenzie seconded, and
RESOLVED:  That the lists of payments for 24 February 2022 be approved.
(Vote – For: 5, Against: 0)
98.     CHAIRMAN’S / MARKET ADMINISTRATOR’S REPORT
There was no report.
99.     BUTCHER’S ROW ROOF REPORT
The Clerk explained that the Maintenance Supervisor had made an assessment of the roof believing that additional down pipes would help deal with the weight of water, the force of which is too much for the guttering and adversely impacts upon some Units.
He will develop a visual plan / report for Members to consider.
100.   DEVELOPMENT OFFICER’S REPORT
The Development Officer explained that he had been working on Welcome Back Funding opportunities and working with outside agencies that included (and provided):
• Coach Tours Monthly, advertisement inviting people to visit Bideford, including reference to the Pannier Market; it highlights that we are a Coach Friendly Town (publication was circulated to Members).
• Forty per cent of the Stagecoach Bus Fleet will have a “Visit Bideford – A Warm Welcome Awaits,” advertisement on the “lower rear,” of the Bus.

The Buses will cover: South Molton, Westward Ho!, Ilfracombe, Braunton, Croyde and Barnstaple – it will run up to Easter (and perhaps beyond as the adverts are replaced).  The above image has been posted on Social Media by a member of the Businesses of Bideford who had seen it.
• A four week run (115 slots) of Heart FM (radio) advertisements; the Assistant to the Town Clerk had been instrumental in producing the outcome.  (Members played the advert responded in the positive.)  Heart FM has a reach that includes Minehead, Tiverton, Crediton, Okehampton and all between.
The Development Officer reiterated that the Market is listed on the Visit Devon website which is ranked highly on Google search.
He confirmed that he had been working on the https://bidefordpanniermarket.co.uk website support provided by Councillor Hawkins (who had first created the site).
He spoke also about recent social media activity, the reach of boosted and unboosted posts, the shares and subsequent enquiries (three had been received today, 24 February 2022).
The Development Officer has made submissions that will bring the Market Entertainment Licence up to date including the opportunity to allow for the sale of alcohol and the screening of films.  Individual traders will no longer need to make application to sell alcohol.
The District Licensing Officer had been very helpful; once the application has been approved and requisite advertising / time period satisfied films will be screened.
The Chairman will attend a Designated Supervisor course where he will learn about restriction and conditions; he will not need to be in attendance at any given function, but he will need to be appraised of the Event and satisfy himself that all requirements are met.
The Chairman thanked the Development Officer for his work.
101.     TENANT / TRADER REPORT
1.     Ms Hilton whilst appreciative of the Markets’ social media presence believed there was a need for a huge overhaul in the photographs posted, many were out of date providing misleading expectations.
The Development Officer agreed but noted that he did not have responsibility for all Market posts.
2.     Ms Hilton expressed the need for more signage in the Town.
The Chairman noted the finger posts and information boards.
Councillor Bushby believed that visitors to the Town could be unaware of the Market.  He suggested that a four sided sign could be created that would slip over the wrought iron post outside Lloyds Bank where the High Street meets Allhalland Street and a further sign could be slipped over the post outside Otters where the High Street meets the Quay.
Discussion continued, discounting A boards, and the Chairman’s recce with the Development Officer.  The Development Officer would explore further.
3.     Ms Hilton had reported a request from Market Hall Tenants for the Market Hall to have a six week period, during the summer, that would allow for market traders to trade from Tuesdays through to Saturdays as opposed to simply Tuesdays and Saturdays.
The Clerk reminded Members that from the introduction of the Studio Units in April 2016 the Market was open for trading from Tuesdays through to Saturdays.  Over time it became apparent that the opportunity was not being supported by traders, the Hall often resembling the Mary Celeste – stalls set out but with few or no traders.  The decision made by the Committee at the end of 2019, to return to two day Market trading, provided greater flexibility with the Hall space to be exploited given that traders would now have to remove their items at cease trading.
Councillor Bushby felt that a Market not trading would only disappoint and eventually visitors would not return.
The Clerk indicated that the original ethos behind the Studio Units was to provide for the creation of Arts Crafts as well as the selling thereof.  The Market Hall Tenants whilst trading on Tuesdays and Saturdays can make sales during the intervening days whilst working on their industry.  Butcher’s Row and the Market Place Shops remained a visitor attraction.
The Development Officer did agree that those entering the Hall were faced by somewhat of a chasm and often didn’t venture to the Studio Units, something he would seek to address.
A general discussion followed on coach visitors who are often, “old and less mobile,” being dropped at the Burton but not having the means to scale the heights to the Market.  The IntaGr8 loss, a fleet of golf buggies, reference to the decommissioned Ilfracombe Dotto train and the difficulties of the road network around the Market were considered.
4.    Ms Hilton displayed the Easter Bunny costume purchased for an Easter Saturday event she was coordinating that will include a colouring competition, display of children’s pictures and Easter Egg prizes.
The Chairman thanked Ms Hilton for attendance and report.
102.     CONFIDENTIAL ITEMS TO BE TAKEN IN PART II
Proposed by Councillor McKenzie, seconded and
RESOLVED: That in view of the confidential nature of the business about to be discussed, it is advisable, in the public interest, that the public be excluded for the remainder of the meeting; the tenants were instructed to withdraw.
(Vote – For: 5, Against: 0)
103.     CHAIRMAN’S CONFIDENTIAL REPORT INCLUDING STAFFING MATTERS
There is a confidential minute associated with this item.
104.     WEBSITE DEVELOPMENT
There is a confidential minute associated with this item.
105.     TENANT / TRADER
There is a confidential minute associated with this item.
106.     RETURN TO STANDING ORDERS
Proposed by Councillor McKenzie, seconded and
RESOLVED:  That the meeting returns to Standing Orders.
(Vote For: 5, Against: 0)
The business of the meeting having been completed, the Chairman thanked the members for their attendance and the meeting concluded at 7.52 pm. 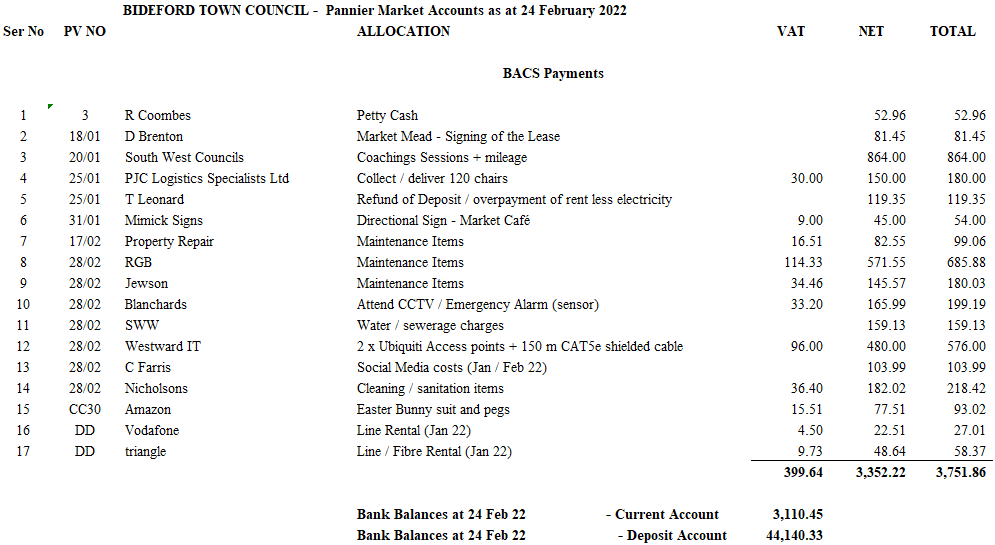