Minutes of the Town Council Meeting held in the Council Chamber,Town Hall, Bideford on Thursday 5 March 2020 at 6.30 pm

161.      DECLARATIONS OF INTEREST ON ITEMS ON THE AGENDA

A member of the Public praised Councillor Mrs Hellyer and the DCC team for the very good work on the trees and area at the southern entrance of the Pannier Market.

She also praised the excellent job of the Maintenance Team on the Buttgarden Street Pavement and the paving area around the Market.

A second member declared that they had moved to the area one year ago. They believed that there were serious underlying crime problems prevalent within the Town including anti-social behaviour.

They noted that vulnerable children were accommodated next to a house for ex-convicts. She questioned the authority and management behind the decision making and what the Council could do.

There is drug dealing on street corners, anti-social behaviour; her visiting parents’ car had been attacked whilst they were seated in it. She had contacted Alison Hernandez, the Police and Crime Commissioner, believing that there were not enough police on the streets. There are deeper issues that need to be monitored. She noted that 106 incidents had been reported in December with only a handful taken further. The Police, local MP and the public need to work together.

Finally, she suggested that housing problems could be arrested by renovating the derelict buildings, owned by the Bridge Trust; the Council and authorities again needed to work together.

The Chairman informed the Meeting that the “halfway house” was not full of ex-convicts but a facility that supported recovering addicts. He further stated that the Bridge Trust did not own any derelict buildings.

Councillor Mrs Corfe thanked the speaker for raising her concerns. She explained that Charis House supported the vulnerable and homeless. She added that there are charities helping drug addicts, that addiction can lead to homelessness.

The use of derelict buildings again was a complex issue given that they do have owners. TDC are working, though to provide incentives for improvement.

The public member concluded that the anti-social behaviour was seeping into residential areas where aggression has been experienced; dealing with the issues should not just be about nurture but discipline also.

The Minutes of the Meeting held on 23 January 2020 were approved and signed as a correct record.

b.         Ms Prendergrast explained that the Onion Collective had been approached by TDC at the end of last year to help with the Future High Streets Bideford application. In working with TDC, the Governance Body and broadly talking with Bideford people they had found that the Community was extraordinarily positive, “very engaged” and full of ideas.

The main thrust of her presentation covered the response to questions relating to the longer-term issues of the Town and to establish what could be done to change the socio, cultural and economic position. Young people, different parts of the Community, stakeholders were all questioned, workshops were run, and resident surveys conducted. A meeting will be staged in April to provide feedback on the results of the survey.

The socio demographic made the Town an “interesting enclave.” Many of the more senior age group completed the surveys.

Bideford has quite a young population with many families having children under the age of four.

There is a high number of employed, many caring for the disabled. The qualification range was regarded as low level, with fewer engaged in the professional categories.

Ms Prendergrast’s presentation gave detail to questions asked and the percentage responses – fifty per cent of the community were satisfied with the Town. The sense of community was some somewhat strong – again fifty per cent indicated that they would like to be more involved in the decisions which affect their local area. She indicated that half those questioned were somewhat proud to live here which she concluded was not a positive picture but not terrible either.

In assessing what those canvassed should like to see addressed for the betterment of the Town Ms Prendergrast concluded that strong leadership, creative vision, sharp organization, total commitment, good transport and communication would be needed.

She reiterated that there had been an excellent response from the Townspeople to the survey, noting that a community priority was the maritime / Quay element of the Town despite it not being part of the Hight Street Fund.

Mr Fuller advised that the Draft Application, including the Business Case would be submitted for 15 March 2020; the full case to be submitted by 30 June 2020.

Members had received a written report from County Councillor Mrs Linda Hellyer - the document is attached and forms part of these Minutes.

In noting paragraph three on DCC leading the response to climate change the Chairman noted that the Government had made a “U” turn on subsidising wind turbines. Current TDC (Local Plan) policy remains the same, in not permitting the building of wind turbines.

Given the Climate Emergency he felt that there were important issues to address not least the reversal of the (TDC) wind turbine policy.

167.      COMMUNICATION BROUGHT FORWARD ON THE DIRECTION OF THE MAYOR

a.          The Chairman had received correspondence praising the Council’s operation, in particular the Maintenance Team who had conducted a stunning tidy up of Jubilee Square. They thanked the Council’s proactive approach that benefited the Town and visitors.

b.          The Town Clerk reminded Members of the Commonwealth Flag Day on Monday, 9 March 2020 at 10.00 am. The Flag will be raised above the Town Hall and there will be a brief ceremony at Riverbank House.

The Town Clerk asked Members to confirm their attendance with the assistant to the Town Clerk.

The Town Clerk invited Members to consider moving the date of the Town Council meeting scheduled for Thursday 7 May 2020 to Thursday 14 May 2020, in the light of the VE Day Celebrations to be held on the 8 May 2020, and the firm commitment required from the Mayor of the Day for the events planned on 8 May 2020. She confirmed that the current Mayor was happy to support the initiative.
(Councillor Herron left the Chamber.)

RESOLVED: That the the Town Council meeting scheduled for Thursday 7 May 2020 is rescheduled to Thursday 14 May 2020.

(Councillor Herron returned to the Meeting.)

The Minutes of the Meetings held on 13 February and 20 February 2020 were approved and adopted.

Minutes of the Meeting held on 29 January and 19 February 020 were approved and adopted.

Minutes of the Meeting held on 27 February 2020 were approved and adopted.

The Minutes of the Meeting held on 28 January 2020 were approved and adopted.

Minutes of the Meeting held on 11 February 2020 were approved and adopted.

The Town Clerk would arrange for further distribution with future Agendas.

The Minutes of the Meeting held on 26 February 2020 were approved and adopted.

Members considered the request by the Twinning Association to hold the Landivisiau Reception on Saturday 30 May 2020 at 10.30 am.

RESOLVED: That the Council host the Landivisiau Twinning Association at a reception to be held in the Market Hall on Saturday 30 May 2020 at 10.30 am.

176.      REQUEST TO BORROW THE FISHERMAN, SANDERCOCK PEN AND INK DRAWING

Members had been given detail of a request from the Bideford Burton Exhibitions and Collections Manager to borrow The Fisherman, pen and ink drawing, by Henry Ardmore Sandercock, currently hanging in the Mayor’s Parlour.

The Chairman advised that he was a celebrated prolific local artist although little is known about him.

RESOLVED: That the Henry Ardmore Sandercock, The Fisherman, pen and ink drawing is loaned to the Bideford Burton for their exhibition 14 March – 4 May 2020.

Members considered the request from DCC for proposed street works and dates.

RESOLVED: That the Council support the DCC proposed street works and dates.

Members noted the Minutes of the Meeting held on 22 January 2020.

Councillor Mrs Craigie advised that there was no update.

Councillor Johns advised that there was no update.

The Chairman advised that the Head of Paid Services has given notice of her impending retirement.

Recent discussion topics had included, increased Council Tax, ethical investments, the Plough theatre, Torrington, the Burrows Centre and the Barnstaple Crematorium that had seen a slump in business. There was also a desire to move the Westcombe Depot operation.

Councillor Bushby noted that a settlement had been agreed with Kivells that would cost TDC a considerable amount of money.

He explained that five brand new homes had been purchased representing a change in policy; new tenants were ready to move in.

The business of the meeting having been concluded the Mayor thanked the members for their attendance at the meeting which concluded at 7.44 pm.

My apologies that I cannot be at the meeting, but I will be away on annual leave.

The main thing that has happened at County Hall since we last met, is that the budget has been set. This is the best budget for 10 years, in that there is extra money instead of cuts. I am attaching a budget briefing to go with this report.

I am also sending a separate briefing on what Devon County Council (DCC) is doing to combat climate change.

One of the biggest challenges that DCC face is to do with funding for childrens services, particularly those costs to do with education for children with special and highly complex needs. I am sending with this report a copy of a letter which has gone to all MP’s. The funding formulas used, favour urban areas, not large rural counties like Devon.

A briefing paper has been sent to MP’s about the role of DCC, and I thought that you might like to see that. A lot of people get confused about what each tier of council does.

If there are any questions for me at the council meeting, if you can contact me, I will reply upon my return.
This email address is being protected from spambots. You need JavaScript enabled to view it.

Alternatively, matters can be reported via the website. Google Devon County Council, report a problem, and the page will come up. Click on the appropriate icon and follow the simple instructions. 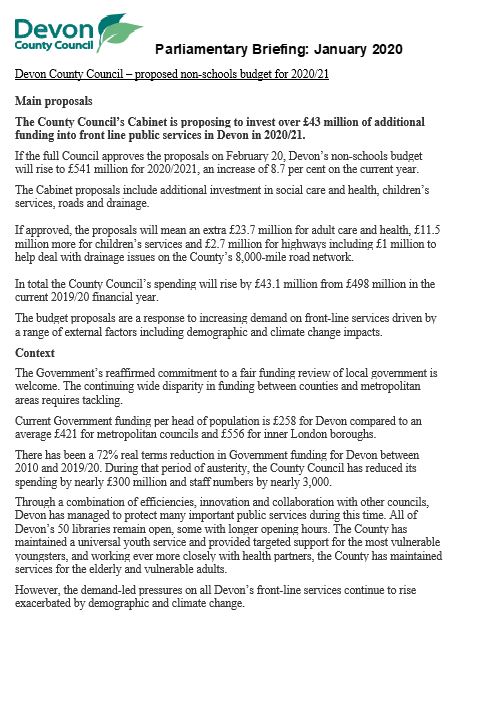 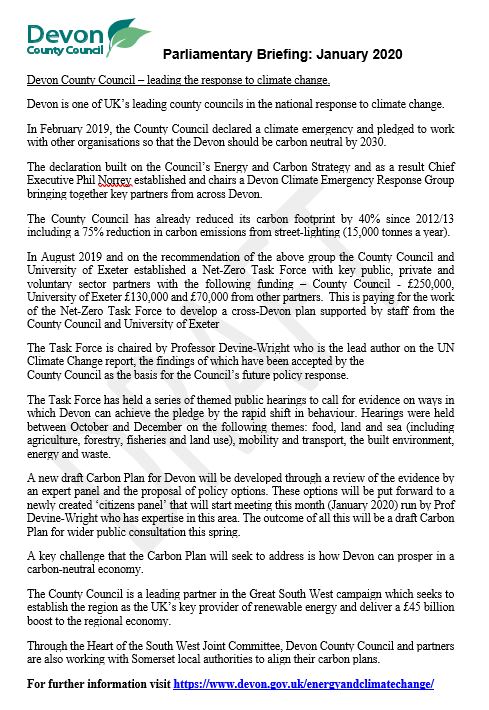 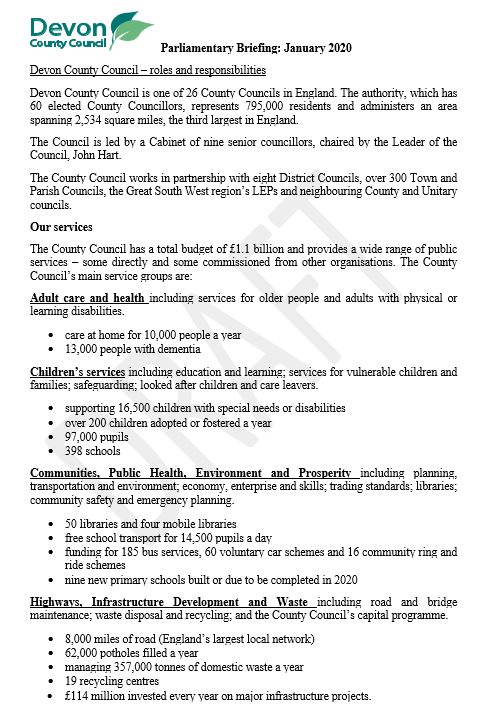