Minutes of the Allotments Committee Meeting held in the Council Chamber, Town Hall, Bideford on Tuesday 21 September 2021 at 6.04 pm

13.   DECLARATIONS OF INTEREST ON ITEMS ON THE AGENDA

The Minutes of the Meeting held on 13 May 2021 were approved and signed as a correct record.

Mr Cornish believed that it had been a good year for the Site noting that it had performed well in the Inter-Site Challenge.

The Plots are looking well, the new wildlife area is thriving, beetroot has suffered and that a “purge” on plastic has been very successful – all unrecyclable plastics have all but gone.

Mr Maund indicated that the Site was similarly looking well.

A new Committee had been voted in at the AGM held on 11 September 2021.

There are a number of ideas in the pipeline that will lead to an improvement of the Site.

He noted that Handy Cross had won the Inter-Site challenge.

The Clerk advised Members that he had visited the Site on a number of occasions during the year, along with the Chairman, Maintenance Supervisor and Assistant to the Town Clerk (who has worked diligently on the administration and liaison with Site representatives); he had recently spoken with the former Committee Representative.

The Site is looking as well as it has for some time.

There have been some eager new tenants who have hit the ground running and made an excellent impression.

There are one or two empty plots and a small number of others that do need work.

He advised the Assistant to the Town Clerk has corresponded with various tenants to encourage work and, indeed, served Notice.

He noted that withdrawal of the skip facility had not had an adverse impact upon the Site.

Mr Long believed that the Site was in a terrible state. He noted that the Council had worked to encourage tenants to work their plots. He believed, though that those who had not attended their plots, when served Notice, simply left, leaving a garden that had not been attended for a long period. The lack of commitment impacted upon neighbouring plots. He felt that there were a number of tenants who should be relieved of their tenancies.

He advised that the fence was in good order but raised concerns about the presence of Dutch Elm disease.

The Clerk advised that he would be seeking to engage an arboriculturist to attend the boundaries of the Tricks, Handy Cross and Pollyfield Sites following a survey.

Mr Long requested that to preserve the hedges and avoid creating any holes, and opportunities for unauthorised access, the trees / undergrowth should be reduced to hedge level.

Discussion followed on stricter enforcement of procedures in an effort to ensure good cultivation of plots – there is a waiting list.

It was noted that a cadre of tenants do in addition to maintaining their plots also help and support the wider Site community.

RESOLVED: That a change is made to the Order of Business to allow for Item 10 to be considered before Item 9, allowing for the Budget recommendation to inform the Rent Level decision.

After a discussion on the needs of the individual sites in the coming year it was:

Members having made recommendation on a balanced budget, it was:

RECOMMENDED: That the Marland and Handy Cross Allotment Sites remain self-managed under the same terms as before.

The Chairman, having established that there was no further business to discuss, thanked the Members for their attendance and concluded the Meeting at 6.40 pm. 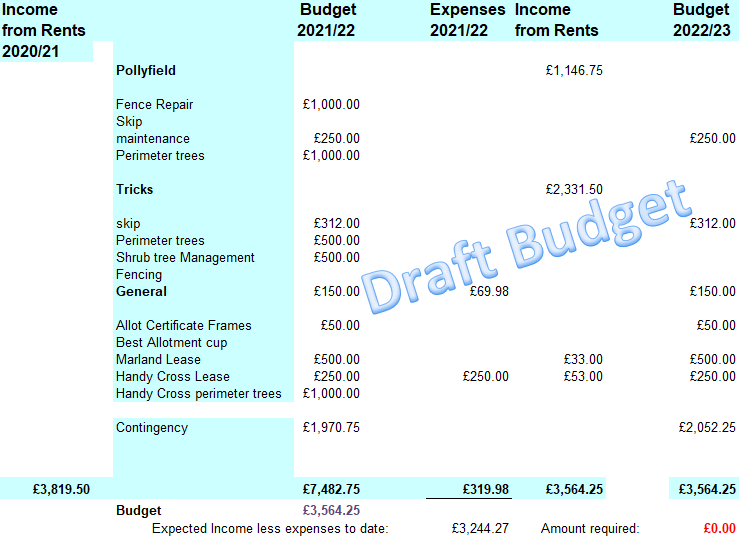