Minutes of the Staffing, Finance & General Purposes Committee held in the Town Hall, Bideford on Thursday 9 September 2021 at 6.30 pm

Councillor S Inch noted that if Councillors cannot attend a meeting they should get a substitute. The Chairman and Committee Members agreed and asked that this be minuted.

035.     DECLARATIONS OF INTEREST AND ANY REQUESTS FOR DISPENSATION ON ITEMS ON THE AGENDA

Councillor Mrs Gubb declared a pecuniary interest in agenda item 14 (Husband is a seasonal Member of the Maintenance Team).

Proposed by Councillor McKenzie and seconded, the minutes of the meeting held on 2 August 2021 were approved and signed as a correct record.

• The Town Clerk advised that there is no longer a Bideford Branch of the Royal British Legion and asked whether the Town Council should organise the refreshments following the Remembrance Sunday Parade. It was agreed that the buffet should be organised by the Town Council.

• The Mayor advised that he and the Town Clerk had met with the supplier of an air exchange unit. The air is scrubbed within the machine and clean air is released. Members asked about the cost of the filters and who would change them. The Mayor advised that the filters could be changed in-house. Members also asked if the machine could filter out the Covid virus, and it was advised that it does. The Mayor will obtain some further information and costings and put this as an agenda item for the next SFGP meeting.

There was a discussion about payment number 29 – weed control, and the type of weedkiller to be used. The Maintenance Team would like to use Professional aquatic friendly roundup. This was agreed, but it was specified that although the weedkiller may be purchased, it should only be used as a last resort, with the team wearing full PPE, and only where other methods of removing the weeds are inadequate.

Members considered the parking costs for free parking in Bideford (from 10.00 am) in Bridge St., The Pill, The Manor and The Quay during the Christmas period and confirmed with the Town Clerk that the costings did not include Honestone Street.

RESOLVED: That the provision of free parking at Christmas is agreed in as follows:

Members considered the response from Advanced Pallets regarding the request to purchase/long lease the strip of land intended for a path construction.

As Advanced Pallets have advised that they wish to retain ownership of the land, some Members had concern about the liability to remove the footpath and fencing and reinstate the land should the agreement be terminated. It was felt that although this scenario is not very likely, it is a possibility.

Following discussion, it was agreed that if the lease can be drawn up without a specified time limit, albeit terminable by either party, but with a 12 month notice period, then this would be acceptable.

Members discussed which solicitor to engage and Slee Blackwell was agreed as the preferred option.

RESOLVED: That The Town Clerk writes to Advanced Pallets and requests that the Easement for the pathway is drawn up on an indefinite basis, terminable by either party, but with a 12 month notice period. Slee Blackwell Solicitors will be asked to draw up the lease.

Members considered the request from the Bideford Town Council Mace Bearer, to facilitate the hosting of the Guild of Macebearers’ Conference in February 2022.

RESOLVED: That the request from the Bideford Town Council Mace Bearer, to facilitate the hosting of the Guild of Macebearers’ Conference in February 2022 is agreed.

Members considered adopting the games tables/picnic benches planned for Victoria Park which will be provided by the Town Centre Partnership, once the relevant permissions have been obtained from Torridge District Council.

It was agreed that as the tables are very heavy and relatively vandal proof, they will only need to be covered for public liability rather than damage insurance.

The Town Clerk asked if they were fully funded, and suggested that if they are not, a sum of money could be put towards the tables from the Welcome Back Fund. This was agreed.

RESOLVED: That the Town Council adopts the games tables and picnic benches in Victoria Park once all the permissions are in place. The Town Clerk will check if they are fully funded and if they are not she will explore the possibility of a contribution from the Welcome Back Fund.

RESOLVED: That Glendale is asked to conduct the annual boundary survey.

Members considered the report on ash dieback within Ford woods, which recommends the production of a woodland management plan, and works within the woodland.

It was suggested that the Royal Forestry Commission may also be approached for advice.

RESOLVED: That the recommendations within the report are accepted and that a Woodland Management Plan is commenced.

“The replacement of dead ash trees in Ford woodland.”

Councillor Christie advised that he had been researching ash die back, and in some instances the ash regenerates. He advised that the Woodland Trust were giving away free saplings, and these could replace any ash that was removed. Members discussed obtaining some whips and creating a nursery area (10m x10m was suggested), possibly within the woods or elsewhere to grow them on. Councillor Craigie advised that deer fencing would be required to protect the young whips. He offered to look for a suitable planting area. It was advised that Councillor Herron also has some saplings, and he could be asked if these could be planted within the woods as well.

The motion was amended to reflect the suggestions raised during the discussion.

RESOLVED: That the motion is supported with the Woodland Trust being approached for some free saplings. The Maintenance Team will be asked to plant the saplings within the woods in a nursery area which will be protected with deer fencing. Enquiries will be made with Councillor Herron about the availability of his saplings for planting within the woods.

The team were once again praised for their excellent work, particularly along Manteo Way, and in the Grange Road area prior to the Chudleigh Fort picnic day. 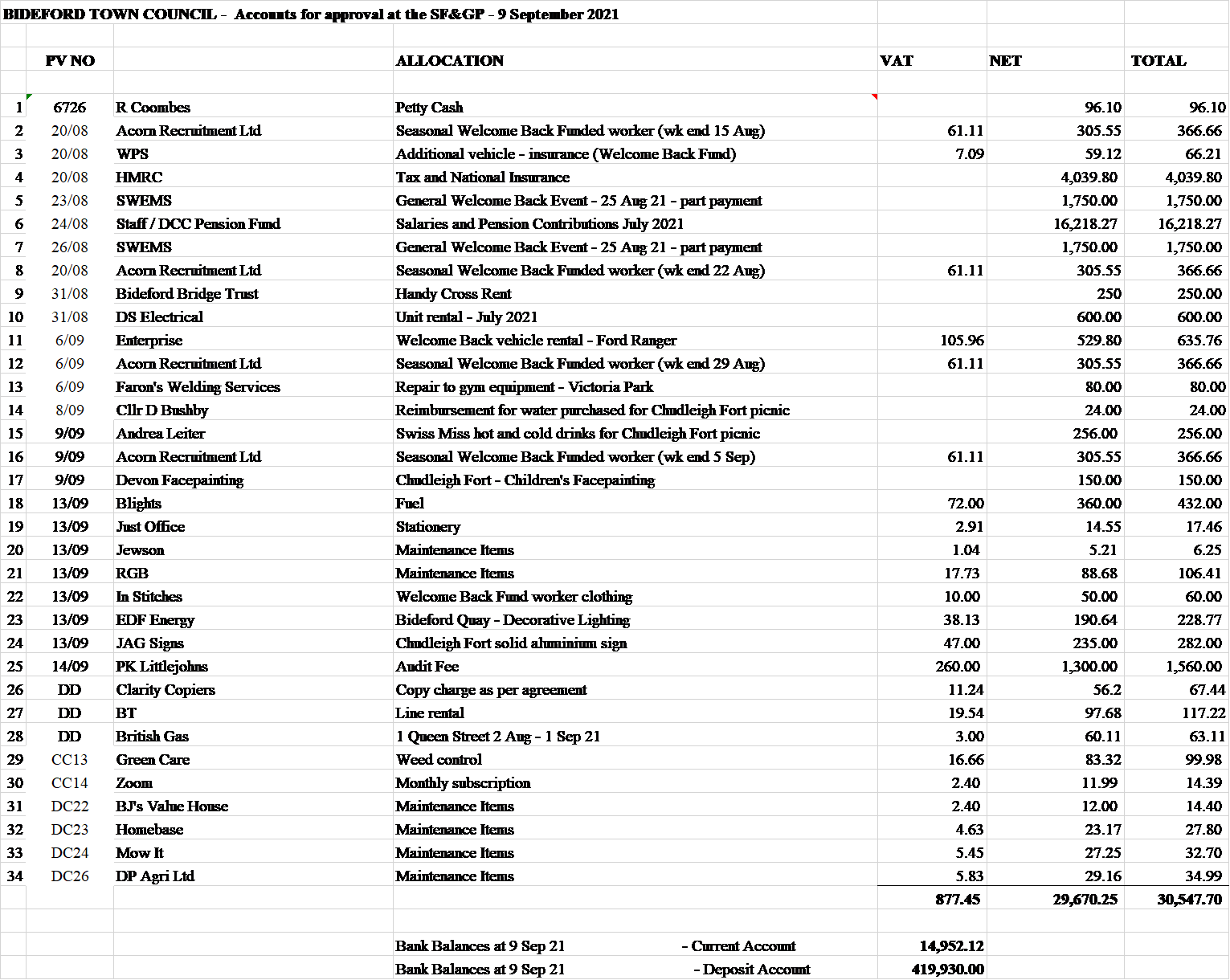