Minutes of the Staffing, Finance & General Purposes Committee held in the Town Hall, Bideford on Tuesday 3 August 2021 at 6.30 pm

022.    DECLARATIONS OF INTEREST AND ANY REQUESTS FOR DISPENSATION ON ITEMS ON THE AGENDA

Councillor Mrs Gubb declared a pecuniary interest in agenda item 13 (Husband is a seasonal Member of the Maintenance Team).

• The Mayor Introduction Ceremony has been rescheduled for 28 September 2021.
• Graham Hobbs, local photographer has kindly offered to donate a framed copy of his picture depicting a rainbow over the river Torridge to Bideford Town Council “The third bridge”. Members were delighted to receive this offer and asked the Town Clerk to accept with grateful thanks.
• The Town Clerk advised Members that a number of organisations who had been in receipt of a grant had written to thank the Council.

Members received and approved the Internal Auditor’s Report as at 30 June 2021.

RESOLVED: That the Council’s Internal Auditor’s Report as at 30 June 2021 is accepted.

Thanks were expressed for Councillor Mrs Langford work as Internal Auditor

The quotations received to prepare the legal agreement for the Pollyfield Path had been circulated with the agenda.

Members considered the questions that had been raised by the solicitors who had been approached to prepare the legal agreement. The longevity of the agreement was considered along with the security of tenure. Members discussed the possible scenario where for any reason, Advanced Pallets were to need the section of land back along which the path is to be constructed, then the Council would be required to remove the path and reinstate the original fence line. This could incur a future liability for Bideford Town Council. It was agreed that the Town Clerk should approach Advanced Pallets to enquire whether this section of land could be gifted, sold or leased on a long-lease to the Council. The decision regarding which solicitor to engage will be deferred until the next meeting.

RESOLVED: That the decision regarding which solicitor to engage is deferred to the next meeting and that Advanced Pallets are contacted to see if they will consider whether this section of land could be gifted, sold or long-leased to the Council.

Members considered the costs associated with the extension of the Festoon lighting, previously agreed by Full Council.

RECOMMENDED: That the costs associated with the extension of the Festoon Lighting, which total £23,606.00 are agreed.

It was noted that before the project can proceed, the Town Clerk will need to obtain risk assessments from the contractors involved, in order to secure permission from Devon County Council for the installation of the festoon lighting.

Members considered the quotation received for the replacement of the damaged (and now removed) catenary support column outside Bridge buildings on Bideford Quay.

RECOMMENDED: That the Quotation from Urbis Schredder for the provision of a new Catenary support column totalling £8,357 is accepted. The Town Clerk should approach Devon County Council to request that they pay the installation cost, but if this is not forthcoming, Bideford Town Council will organise and pay for the installation of the column.

“The purchase of land and associated build costs to construct a depot for use by the Maintenance Team.”

Councillor Bushby explained the reasoning behind purchasing land to build a bespoke facility for the Maintenance Team. He said that it is widely agreed that the team do a great job in town, and their work benefits all residents. They are currently housed in a rented unit, and a purpose-built facility which the Town Council owns would future proof their housing requirements. Rented facilities are scarce, and we require security of tenure. Councillor Bushby advised that the proposed facility would have a modular structure, which could be expanded at a later date to possibly include some office space, or areas to rent to others, thereby providing an income. Councillor Christie suggested that Northam Town Council may be interested in sharing the facility. Councillor Bushby advised that the land costs are known, but in order to ascertain the full build costs, the Town Council will need to employ an Architect to draw up the plans, and a Quantity Surveyor to itemise the build cost. He estimated that this will be in the region of £450,000.00.
Once the costs are ascertained, a schedule of works will be drawn up and an application for funding will be made to the Public Works Loan Board.
It is proposed that the funds set aside for the Dotto train project, which did not come to fruition, are re-allocated to the Maintenance Depot Project. This will provide sufficient funding for the Architect and Quantity Surveyor costs. Once the depot is built, the Town Council will no longer need to pay rental costs and will own an appreciating asset with rental potential. The Maintenance Team are keen to grow plants from seed, rather than buy them in, and we have sufficient expertise within the team to facilitate this. There is sufficient room to build greenhouses on the site.
The Town Clerk advised that the Public Works Loan rates are variable depending on length of loan, but generally between 1 and 2%.

Councillor Christie said he would like to see some figures as he is very wary of un-costed items. Councillor Bushby advised that if an Architect and Quantity Surveyor are employed, the costs will be ascertained. Councillor Ratcliff suggested setting a budget for this exercise.

RECOMMENDED: That the Town Council proceed with the project and that the funds ringfenced for the Dotto Train are reallocated to the Maintenance Team Depot Project. In order to commence the project and to obtain accurate costings an Architect and Quantity Surveyor will be employed in the first instance. Once the full costs are known, The Town Council will apply for a Public Works Loan.

Members considered the renewal of the Postcode Gardener (self-employed) contract for a further year, on the same basis as previously. This position is grant funded.

RESOLVED: That the contract for the Postcode Gardener is renewed on a self employed basis for a further year.

The business of the meeting having been completed, the Chairman thanked the members for their attendance and the meeting concluded at 7.22 pm. 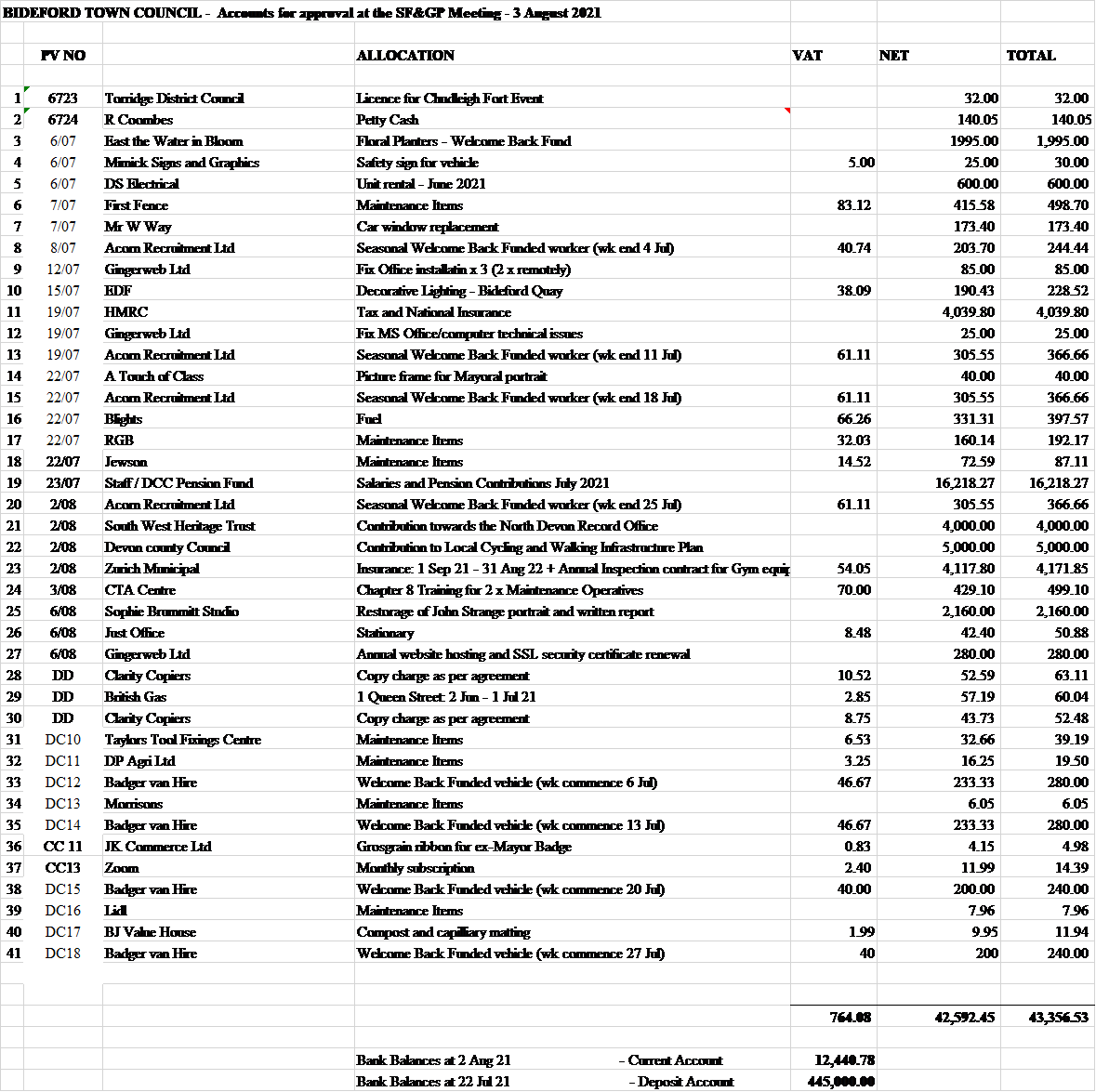