Minutes of the Market Management Committee Meeting held in the Council Chamber of the Town Hall, Bideford, on Thursday 5 December 2019 at 6.34 pm

84.      DECLARATIONS OF INTEREST ON ITEMS ON THE AGENDA

A Butcher’s Row Tenant took the opportunity to promote his application for 18 Butcher’s Row. He was guarded against any further Art and Crafts outlets noting how his operation would encourage visitors to remain on site and further patronize the wider Market experience. On prompting he believed the Market should encourage traders with the Business Model of daily need provision, consumables. He affirmed his commitment of working six days sufficiently busy to expand his offer.

Minute. 76. Miss la Fontaine indicated that, “the quiet period and intimated that without the waiver traders would not commit to the Market in January,” had been wrongly attributed to Ms Hurford and was spoken by Mr Sidwell. The Chairman confirmed that the entry would be corrected.

The Minutes of the Meeting held on 24 October 2019 were approved and signed as a correct record.

The Clerk encouraged the Committee to take the opportunity to record their appreciation of the former Development Officer suggesting a letter, signed by the Chairman to be sent in recognition of her work.

The Chairman noted his sadness and spoke of his disappointment and frustration at what had informed her decision to quit. Other Members expressed their anger whilst praising her professionalism.

The Squire of Bideford Phoenix Morris had requested the opportunity for Morris Dancers to perform at the Market on Saturday 10 October 2020.

RESOLVED: That the Bideford Phoenix Morris may host dances at the Pannier Market as part of the Bideford Day of Dance on Saturday 10 October 2020.

a.      Mr Sidwell had explained that two senior ladies had scaled the Butcher’s Row stairs and having reached the summit discovered, through the clear glass doors that the Market was in fact closed (on the Monday). He wondered whether an ‘A’ board or ropes could be introduced to prevent those that wish to view or enter the Market on a non-Market Day climbing the stairs, especially the elderly and infirm.

The Chairman suggested that the number of occurrences should be reviewed over time to establish if there was indeed a need.

The Chairman indicated that the item should be considered by the Heritage Working Group.

b.      Mrs Morgan indicated that the majority of Traders had elected not to trade during the month of January 2020; Mr Sidwell confirmed that both he and Ms Sparkes would be taking a holiday during the month. Others too had indicated as such.

Mrs Morgan noted that it would provide the opportunity for the Hall to be “deep” cleaned, and any maintenance / improvements conducted. She wondered how the works would impact upon the Work / Shop Studio Unit Tenants. It was confirmed that whatever “the Works” the Tenants would have safe access to their respective Units, given that their agreement was not month to month.

Councillor Corfe believed that the non-trading month would provide an opportunity to look at the Hall, advertise it to draw Community Groups and Events, exploit it.

Discussion followed on the appetite for trading Tuesday through to Saturday, how it had been introduced on the advent of the Studio Units. The ruling that stalls had to remain, uncovered and run under a “buddy buddy” system had led to very few traders on site, during mid-week, often less than a handful.

The Clerk referred to the former Development Officer’s presentations listing events to be considered e.g. food and drink, beer festival, bands, Council organised Events, indoor Cinema and Roller Disco. He also highlighted her Nabma Report referencing Opening Hours: “Many Markets have reduced their opening times but stressed the importance of a full Market at the time advertised. A lot of Markets only open from two to four days.” She believed, “that the Market is unique and should be regarded as a visitor / destination / shopping experience.”

Members discussed the opportunity to return to the Charter Trading Days of Tuesday and Saturday leaving the other days to be used for specialist Market trading days e.g. antiques, community group activities, hired for yoga / fitness groups and having a larger Event scheduled for each month.

Mrs Morgan confirmed that mid-week trading could be “terrible”.

Miss la Fontaine believed that the six-week summer holiday period, with two weeks either side could provide for an opportunity to promote a number of Events.

The Chairman agreed that a return to the Tuesday and Saturday format would allow for the summer midweek to be maximised; Miss la Fontaine agreed that the Market could remain open for trading. The Chairman reiterated that along with other local Markets given days could be specific i.e. antiques although the standard Market could run alongside.

Mr Sidwell indicated that the Market accommodated the additional Torridge Arts and Crafts, fourteen are due to supplement the Signing of the Lease on 7 December 2019; the increased numbers / working alongside the standard traders can work, he stated.

The Chairman felt that the re-introduction of trestle tables would be a benefit, providing the flexibility that Barnstaple, South Molton and Tavistock enjoy. It would clear and improve the view (through the new glass doors and within the Market generally) of what was available / happening in the Hall. It would also provide for the removal of goods and “breaking down” of stalls at the end of the trading day.

Mrs Morgan spoke of the advantages for the current canvas stalls where they offer the opportunity to hang items and protect goods from the light. The Chairman indicated that light damage would be mitigated by the removal of goods at cease work.

Councillor Mrs Corfe observed that the striped canvas stalls would hinder the opportunities of hiring out the Hall in the evening. She conceded that change can be difficult.

The Chairman declared that all trader items will need to be removed before the end of the year.

Discussion followed where it was felt that with the opportunity presented by clearing out the Hall fully for the month of January, a new application form would be introduced with new terms that safeguarded traders and staff effective from 1 February 2020. Former traders could re-apply but a promotion / push inviting new traders to apply would be conducted, presenting a new opportunity for the Market.

Mr Sidwell speculated that the breakdown of stalls on Tuesdays and Saturdays need not be necessary should specialist markets / events not be earmarked.

The Chairman indicated that the stalls should be cleared, at the end of trading, each day providing for and maximising the Community / specialist markets / Event opportunities. In providing terms and conditions for the Traders from 1 February 2020, Notice would be served on the Market Complex Tenants providing for (their) new Tenancy Agreements effective 1 April 2020.

RESOLVED: That the Market Hall would be closed to traders during the month of January 2020. All Traders stock / items / will be removed. The Market Hall Studio Tenants would retain access to their Studios Units (given their agreements tenants have recourse to approach the Committee); the Café would remain open (for the Market Hall Complex facility). All new terms and conditions would be introduced: Traders 1 February 2020 and Tenants 1 April 2020.

Members had sight of a report from Market Traders explaining their concerns including:

• Already established community fridge at the Storehouse (within close proximity to the Market).
• A food bank at the top of the High Street.
• Siting opposite a trader who has built up a good business over the last few months in fresh fruit and vegetables.
• Attracting an anti-social element / security issues.

Miss la Fontaine indicated that she “loved” the idea of a community fridge but did not consider the Market was the appropriate place. She believed that they need to be supervised, in this instance there would be nobody, on site, with (full) responsibility. A Café or Citizens Advice Bureau would provide for someone to be in charge. She felt that the Market was transient; it would not work; it was not the right place.

Miss la Fontaine re-iterated her agreement to the principle noting how well they work in Bristol and Brighton but aimed at trendy areas.

Councillor Mrs Corfe did not agree to the Storehouse and added that those who conduct anti-social behaviour would not be interested in the Fridge.

Mrs Morgan questioned the free use of electricity with the item running 24 / 7.

Miss la Fontaine questioned the timing, given the future changes.

The Chairman indicated that the item would be deferred, awaiting receipt of the group’s operating procedures.

Councillor Hawkins advised that he had been in conversation with BT and arranged a meeting on site to explore their community offer / private and public network on Tuesday 10 December 2019 at 12.00 noon.

Mr Sidwell provided a breakdown on the finance package to provide for the Shuttle Bus April 2020 / March 2021. He indicated that the request for £3,450.00 was an increase of £200.00. Nonetheless, he spoke of the importance of the facility not just to the Market but also the success of the Bideford Coach Friendly Status.

Members had previously had sight of the Draft Budget Document.

Following discussion Members agreed to a 10% increase in order to fund the engagement of a new Development Officer for 15 hours a week.

Mr Sidwell indicated that it represented less than four pounds a monthly stall tariff. He believed that the current Casual Rate of £6.00 per day could be significantly increased. Miss la Fontaine indicated that the Casual Rate gives an indication of the seriousness of the Event / operation.

The Chairman directed an increase for the Casual rent to £10.00. Members agreed that the 10% increase should also include a simple rounding up and rounding down to the nearest pound.

Proposed by Councillor McKenzie and

RECOMMENDED: That Casual rent tariff is increased to £10.00 per day and that all other rental payment are either rounded up, or down, to the nearest pound following an increase of 10% across the board, effective 1 April 2020. That each tenant / trader is advised accordingly.

The Market Administrator presented a ‘Draft’ Budget for consideration by the Committee. He advised Members that the Council effectively run a balanced budget adding but that to engage a Development Officer rents would have to be increased. A number of the initiatives to date meant that expenditure would have to be keenly monitored. The £2,500.00 set aside for the Promotions/Development Officer should, through the staging of events, increase in the number of traders, provide more income for further projects.

RECOMMENDED: That the Draft Market Budget 2020/2021 be supported by the Council.

94.    CONFIDENTIAL ITEMS TO BE TAKEN IN PART II

THERE IS A SEPARATE CONFIDENTIAL SET OF MINUTES (96 – 99) FOR THE CLOSED SESSION.

The Chairman, having established that there was no further business to discuss, thanked the Members for their attendance and concluded the Meeting at 9.20 pm. 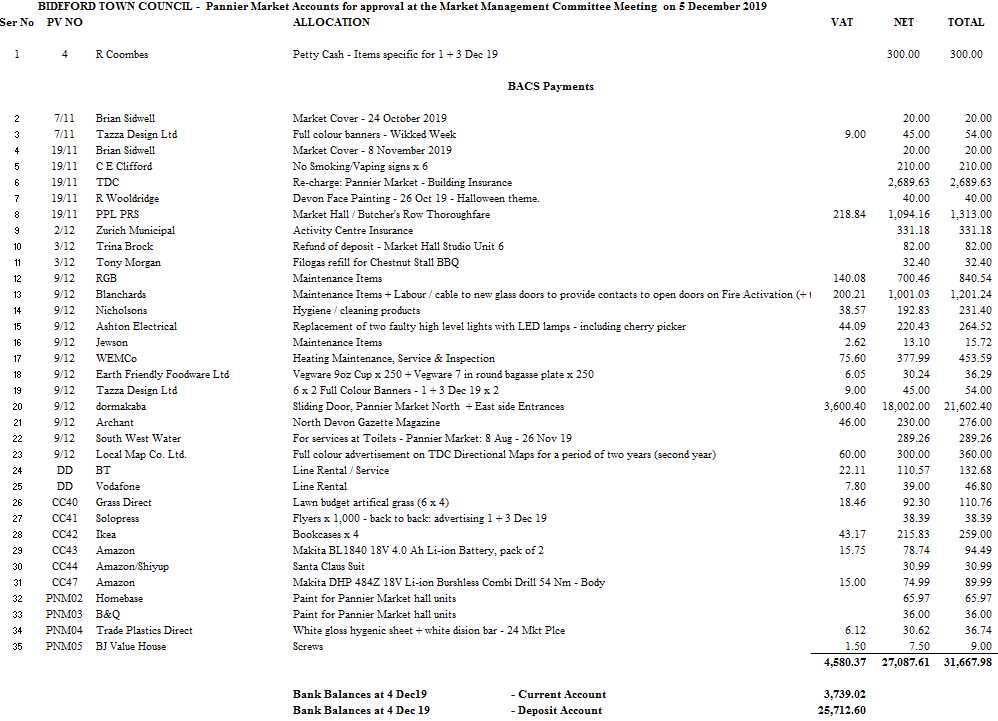