Minutes of the Extra Ordinary Market Management Committee Meeting held in the Council Chamber of the Town Hall, Bideford, on Tuesday 8 October 2019 at 6.35 pm

64.      DECLARATIONS OF INTEREST ON ITEMS ON THE AGENDA

There were no Members of the Public.

Mrs Persson stated that it would be fantastic to have robust Wi-Fi provision in the Market believing it to be a necessity. She advised that a dedicated public and private set-up could be introduced. Given the telephone line the cost would simply be the connection and Wi-Fi set up. An IT Firm that services the Torrington Town Council / Town Hall could provide a quote at £80.00 (refunded on full engagement).

She also noted that BT provide free Wi-Fi to 100 Community Centres and Libraries. The NABMA Conference highlighted how Markets were the Community Hub in the Town; should an area of the Market be earmarked for the Community it could attract free BT Wi-Fi support.

Councillor Mrs Hellyer questioned whether the Council provided Wi-Fi for others.

The Chairman advised that the current free Wi-Fi provision will have a booster installed in the northern side of Butcher’s Row. He also believed that initially the free Wi-Fi provision was introduced to encourage visitors / potential customers to the facility. He expressed concern over GDPR and the legality / security of conducting transactions over an insecure / public network. He noted that several shops do have their own telephone line.

The Chairman also advised that from a poll of just over half the Butcher’s Row tenants 66% would be prepared to make a contribution towards a more robust system, through a rental increase. (The current free Wi-Fi agreement provided by [email protected] runs until February 2020.)

Councillor Mrs Hellyer wondered if the Market Hall traders would find an increase in rent that included an element for an improved Wi-Fi facility acceptable.

Mrs Morgan advised that there are stall holders and tenants that do utilise payment card facilities covered by private telephone security – the Wi-Fi provision / coverage in the Market is not an issue. They are happy with what they have and do not wish to pay more.

Councillor Craigie had discovered that the Coop could offer provision for a medium sized business at £30 per month including firewall / security. He indicated that the Market (Council) would provide access with pass code opportunities to visitors. There would be a cost of £125, including equipment cost; line rental would be additional.

Discussion followed on the mechanism to obtain individual funding against a general overall rental increase. Councillor Hawkins had spoken to Mr Ford, TDC Officer who had been responsible for setting up the free Wi-Fi in Bideford through the Bideford Town Centre Partnership. He had also made enquiries about exploiting the Locality Funding made available to District councillors.

Members were in general agreement about having a facility that would enhance the Community value of the Hall.

Councillor Craigie agreed to provide further alternative quotations for the Meeting to be held on 24 October 2019.

The Chairman, having established that there was no further business to discuss, thanked the Members for their attendance and concluded the Meeting at 7.00 pm. 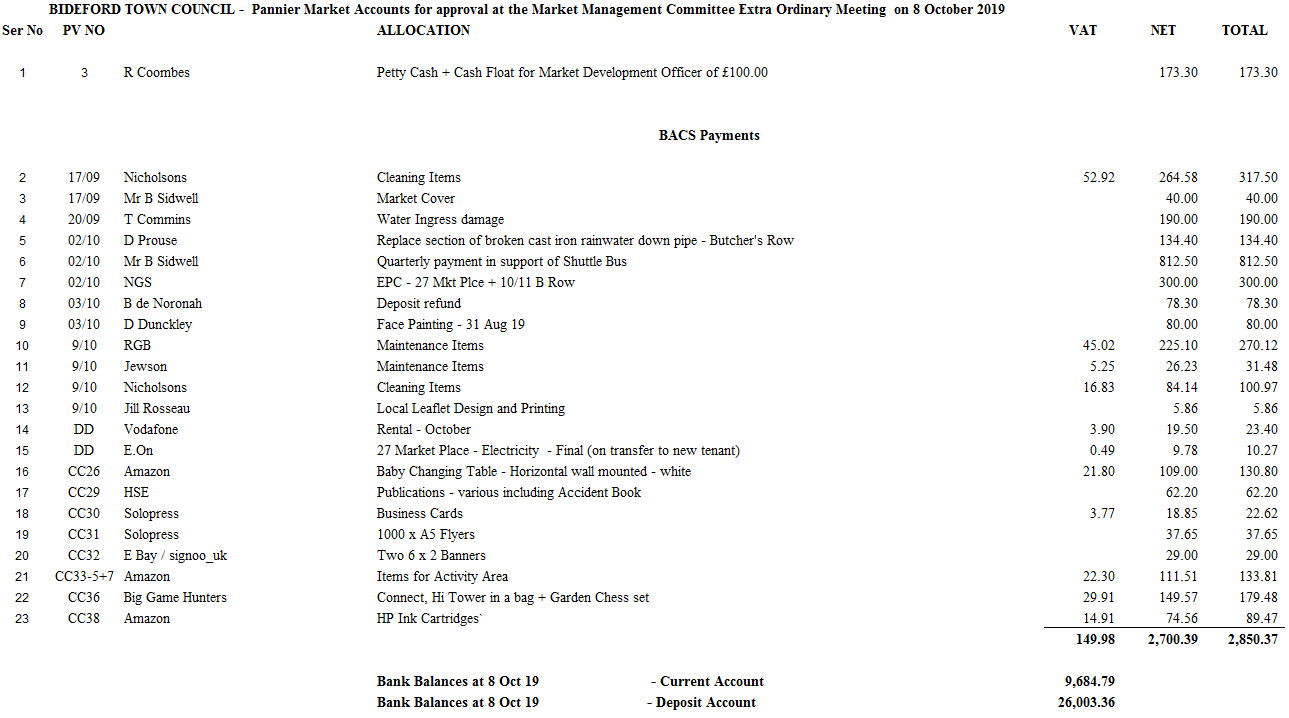