Minutes of the Market Management Committee Meeting held in the Council Chamber of the Town Hall, Bideford, on Thursday 17 January 2019 at 6.30 pm

131.     DECLARATIONS OF INTEREST ON ITEMS ON THE AGENDA

Ms de Noronha drew attention to Mr Sidwell’s inclusion at the Meeting when he had not been in attendance; the Clerk will correct the Minutes.

The Minutes of the Meeting held on 6 December 2018 were approved and signed as a correct record.

No matters were aired.

Councillor Johns noted the replacement purchase of the Portable PA system following the recent poor performance of the previous system at recent public events. Councillor Bushby confirmed the need for the purchase. The Clerk had sought advice from Phatdog Events who directed him to a site that had a number of positive reviews, relating to the equipment.

a.         The Landivisiau Twinning Association will be hosted by the Council in the Market Hall on Saturday 8 June 2019. The Association should like to hold a form of Barn Dance within the Market Hall on the following evening. This will be a repeat of 2017 when the function space provided an opportunity for a Country Music Band, food and drink. The intention would be to set up late afternoon and finish at 10.30 pm, vacating the premises by 11.00 pm.

Members, led by the Chairman, expressed full support for their request.

b.         The Market Administrator has twice asked the Butcher’s Row and Market Place tenants to provide copies of their Public Liability Insurance; to date fourteen of the twenty-six have responded.

The Chairman indicated that the item should be placed on the agenda for the next Meeting should there not be a greater response.

Councillor Bushby indicated that he displays his public liability insurance in effect to inform and provide reassurance to his customers.

c.          The Architect for the Inner Door project has indicated that the Listed Building Consent Application should be submitted by the end of February 2019.

Members noted the Council’s Mill / Allhalland Streets Project was being extended to the Market Place Shops.

Members discussed the opportunity to install a water fountain in an appropriate area within the Hall. Ms de Noronha having spoken to fellow Market Traders indicated that along the Wall where the toilet facilities are situated was favourable.

Councillor Bushby noted that the recently engaged Maintenance Operative had the plumbing skills to enable the Maintenance Team to complete the work “in-house”.

RESOLVED: That the Water Fountain will be plumbed in the Market Hall by the Maintenance Operatives.

Members considered continuing to advertise locally in the Tangerine Map on the same terms as 2018.

Michael Dendle reiterated that Platform Lift from Andover will visit the Market to provide a quotation; he will advise Committee members when a date has been confirmed.

He did advise that the firm were familiar with working with clients where contracts were grant funded.

There had been no meeting.

Job Description to be discussed at a Meeting with the Town Clerk, Chairman of the Market Management Committee, Mr Dendle and the Deputy Town Clerk.

Mr Dendle noted that the Burton were advertising for a marketeer. The post requires the ability to generate income through advertising and sponsorship and through identifying events and activities that will encourage new visitors for twenty-one hours a week, £19,000.00 pro rata.

Members considered an approach given the shared aims of the respective posts; Councillor Brenton agreed to speak to their Chief Executive.

Councillor McKenzie wondered whether to withdraw the Notice of Motion addressed to the Council; the Chairman advised against.

RESOLVED: That Standing Orders are suspended in order to allow Ms Hurford to address the Meeting.

a.         Members noted Mr Lawrence’s withdrawal from leading the Social Media initiative (and the Committee).

b.         Ms Hurford did not believe that stakeholders had been fully engaged prior to the Committee’s Resolution on restricting the various Market associated media to a single administrator.

She spoke on how a Facebook account had evolved within the Market traders and local shop outlets community and that the Council’s Committee were not in a position to dictate its content.

Ms Hurford spoke of the reaction that saw the dictatorial takeover as hostile.

The Chairman believed that when the information was presented to the Committee everyone was “singing from the same hymn sheet.”

Ms Hurford explained that the Media outlets need a team, in the event that any pages are compromised someone is able to monitor and take swift corrective action. In talking about the Community ethos behind the various media she suggested the Council could sponsor a workshop that would enable the Market Tenants / Traders to make the most of a vital media tool in promoting themselves and, by default, the Market. She added that ninety per cent of her business was made through Facebook / Instagram; foot fall alone would not make her business viable.

Ms de Noronha understood that there was engagement and positive responses received to the coordinated social media approach. She indicated that the issue had been where there were multiple “posts” on the same subject. The approach to schedule posts had merit but Ms de Noronha conceded that there had been a need for greater clarity and discussion. At the Chairman’s behest she agreed to source / cost social media training opportunities.

RESOLVED: That Ms de Noronha investigates the provision of social media training that could benefit the Market community.

RESOLVED: That the Meeting return to Standing Orders.

1.         Thanks were expressed to the Committee for their support to the celebration of the departure of a long serving trader. The recipient of the good will was truly happy.

3.         The Market is cold and exacerbated by the broken heater. The Market Administrator indicated that the servicing contractor would be engaged.

4.         There had been discussion on introducing changes to the Winter Hall opening schedule: November to February superseding the current January to March, with the introduction of a series of later opening initiatives. (The Chairman indicated that an item should be placed on the next Agenda.)

5.         Recycle Bins. Councillor Bushby indicated that the Bideford Town Centre Partnership were driving the initiative with a proposal for three bins along the Quay; TDC have no spare capacity to empty them. Should the Council Maintenance Operatives be engaged there would still be the issue of disposal. He concluded that the inertia was not simply just money and infrastructure.

6.         Lighting. Many of the current lights give an orange hue, when spent they are being replaced by more effective white L.E.D. on a one on one basis, necessitating the employment of a cherry picker. Could they not be replaced in one operation? Councillor Bushby felt that this would be a more efficient approach. The Chairman agreed and indicated that the item, including cost, should be placed on the next Agenda.

7.         Introduction of a cash machine. The Chairman indicated that the idea would not be considered.

8.         It was noted that the advertisement promoting the Market had been published in the Coach Tour Magazine, however, there is a lack of traders to engage potential customers. Councillor Bushby indicated that Coach Friendly Status had almost been attained; coach drivers do have huge flexibility and will visit areas where they are most welcomed.

9.        The information board outside the Burton indicates that the Pannier Market trades in fresh fruit and produce; the Chairman will investigate.

10.      Mr Dendle protested at the lack of availability of the free Wi-Fi provision that had adversely affected a number of tenants in conducting their business activities between 14 and 17 January 2019.

He provided a letter signed by a number of traders and tenants expressing their opprobrium at the interruption of the facility and the lack of explanation, albeit that the Market Administrator had spoken to Mr Dendle the day before noting that the Provider had to effect a change to his modem line on account of moving Units.

The letter stated that “those of us who have come to rely on the internet to run and develop our businesses have been seriously inconvenienced.” Finally, “We strongly urge this Committee to source an alternative, reliable and readily contactable provider as a matter of urgency.”

The Market Administrator advised Members that BT Open Reach should be enabling the provision to be restored on Friday 18 January 2019. He advised that free Wi-Fi to the Market stakeholders had been in operation for just less than two years (provision actually began on 26 May 2016). There had been one or two instances where there had been a loss of connectivity but otherwise the Service had been effective. At a simple cost of £30 per month the Council did not have to be concerned over technical and responsibility issues.

He underlined that the provision was free and that the last business to take a tenancy with the Market had installed their own line within a few days, not reliant on the largesse of others. There was no contract with the Council to provide Wi-Fi for tenants to conduct their business.

Mr Dendle indicated that he would be prepared to make a payment to guarantee access to the internet.

The Market Administrator added that while the traders and tenants clearly benefitted from the free provision the driver was to encourage more visitors to the Market. He suggested that where tenants were reliant upon the Wi-Fi perhaps they too should consider installing their own line – tenants have in the past.

Councillor Bushby confirmed that free Wi-Fi was an important facility to offer noting the success of the free Wi-Fi coverage afforded to the Town through an initiative set up by Councillor McGeough.

The Chairman demanded a report, for the next meeting, on providing free Wi-Fi for the whole of the Market. Councillor Bushy suggested contacting a provider and simply asking the cost of high-speed broadband at the Market Complex with a view to providing Wi-Fi coverage.

The Chairman led discussion that included:

• Studio Units 1 and 2 in poor position.
o Remove Unit 1 and relocate below the office area.
o Move both Units and replace with dedicated storage shed space.
• Shorten the gaps between all Units and move en bloc closer to the northern side.
• Liberate the Market Officer’s store room / rationalise the office set up.

Councillor Bushby felt that having the opportunity to work from Butcher’s Row 1A the Market Officer ought to be able to streamline his operation to free up much of the Market Hall workshop space.

The Market Administrator noted the varying tasks and storage requirements that justified his current demands for work space. When there has been a need to clear the Market Hall his workshop is filled by the Traders items various.

RESOLVED: That the Market Officer provides fifty per cent of the store room area, site along the toilet block, for tenant / trader temporary storage. Where necessary racking can and should be purchased.

The Chairman had nothing to report.

The Market Administrator advised that there were two debtors, but only one necessitated correspondence.

The Chairman, having established that there was no further business to discuss, thanked the Members for their attendance and concluded the Meeting at 7.42 pm. 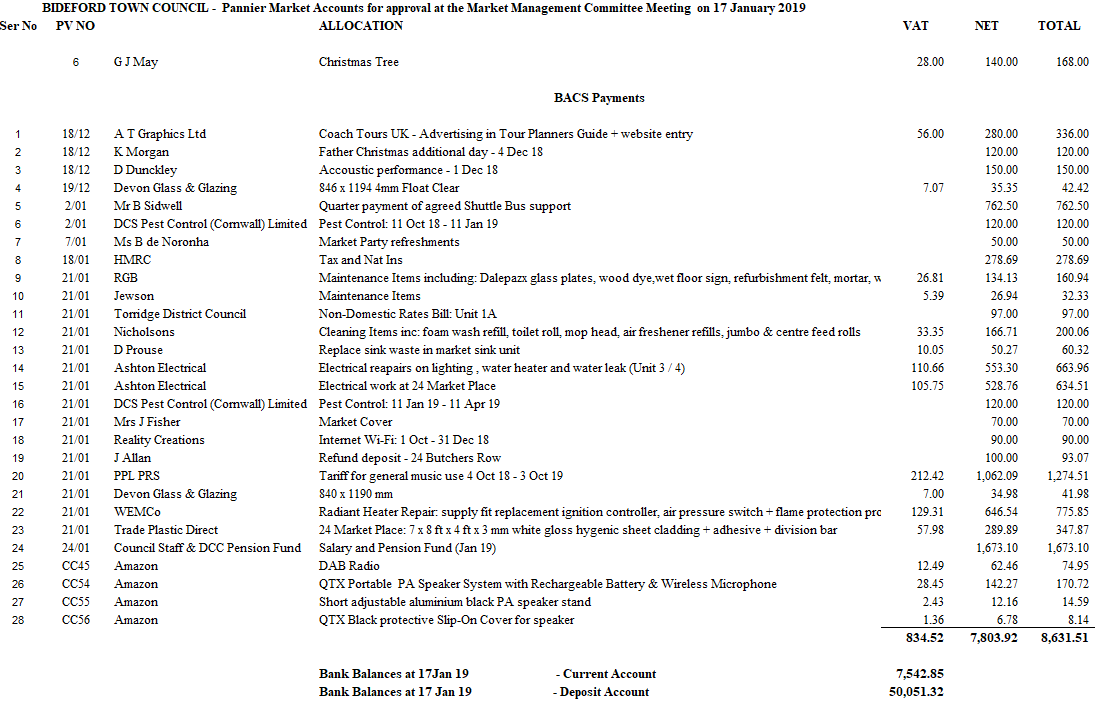