Minutes of the Town Council Meeting held in the Council Chamber, Town Hall, Bideford on Thursday 19 September 2019 at 6.30 pm

74.      DECLARATIONS OF INTEREST ON ITEMS ON THE AGENDA

A member of the public believed that the Hanging Baskets initiative had been excellent, a view shared by many; they were, however, dismayed that they were taken down early. The Member had been advised of the Health and Safety issues presented by the poor forecast of heavy wind and rain; they noted that there are still hanging baskets in the Town. It was hoped that the initiative would be continued next year but with a more robust approach as it was a pity that they were not in situ for the late August Bank Holiday.

The Chairman advised that the previous Saturday, 10 August 2019, he had received a telephone call advising that some baskets had fallen, one narrowly missing someone. Having viewed the scene, he called the Town Clerk who contacted Merry Harriers who in turn removed a number.

The Chairman had also received a lot of positive comments and remained hopeful for next year.

The Minutes of the Meeting held on 8 August 2019 were approved and signed as a correct record.

CHANGE OF ORDER OF BUSINESS

The Chairman directed that the Order of Business be changed with the presentation from the Chamber of Commerce taken before the report from the County Councillor to accommodate a request from Mrs Maynard.

b.       Mrs Maynard thanked the Chairman very much and addressed the Members advising that she had been re-elected Chairman at the last AGM; they have a new Committee with lots of enthusiasm and a new remit: help and support. With more trading in the Digital Age the Bideford Bay Chamber of Commerce needs to engage in a different way, no longer the old-style meeting.

A number of workshops were held in the early summer covering various trades including retail, tourism, manufacturing and the environment.

• A common theme was the willingness to “local source”: North Devon, Devon, South West, with a view to reduce transportation.
• Staffing difficulties, especially tourism, and advertising challenges.
o The political Torridge border is not recognised in the manner that geographical North Devon is. There is joint work with other towns, North Devon manufacturing, Biosphere and Chamber organisations.
• Climate adaption. There is an appetite for change from a wide sector of business, (Businesses and Chamber need to change) and requests for help in this area. T
• he Bideford Chamber is now researching solutions with a digital hub going through the tendering / feasibility phases. It will promote locally, including bite size marketing videos providing help for a younger generation, making information accessible.

Mrs Maynard reiterated that the time was a big change for Chamber:

• Introduction of active Facebook page.
• Internet by end of the year.
o Hub roll out to all businesses.
• Extend membership – no fee, initially.

The Chamber are pleased to be working with TDC on “Future High Street Fund. With a remit of ninety to one hundred and fifty thousand pounds she spoke of the need for a feasibility study – experienced advisors are needed to address the poor footfall. It is a once in a lifetime opportunity.

Councillor Mrs Corfe noted that while Businesses were having difficulty recruiting help could be provided to the younger people of Bideford.

Mrs Maynard indicated that she also sits on the North Devon Skills Board and agreed that approaches can be made to Colleges providing students fit for posts.

Councillor Hawkins wondered about a community element to “the Hub”.

Mrs Maynard indicated that it was not just a website like One Bideford, that no one visits as there is no social media activity linking to it. The North Devon Marketing Bureau, by comparison, has a better presence.

The Hub will be a digital website with sections, initially free of charge, where jobs can be posted and outside requests made.

The Business Hub will replace the Chamber: downloads, climate mentoring etc. It will take time, creating a section at a time but providing more than the One Bideford online directory of shops.

c.       The Mayor thanked Mrs Maynard for addressing the Meeting.

a.       The Chairman invited Councillor Mrs Hellyer to address the Members.

b.       Councillor Mrs Hellyer thanked the Chairman; her report had previously been circulated and included:

• DCC are working with partners on the Climate Emergency.
• There is often inconsiderate and illegal parking, leading to general traffic chaos outside St Mary’s and East-the-Water schools between 15.00 and 15.30.
o Community Enforcement Officers have been asked to conduct regular patrols.
• Efforts are being made to engage a temporary replacement DCC Highways Officer.

In addition to the report Councillor Mrs Hellyer advised:

• The Mill Street Scaffolding Licence was renewed in August for twelve weeks but there will be no further renewal.
• The Railway Bridge pavement still requires remedial work – scheduled for October 2019.

The Chairman invited members to raise points / questions but not before he congratulated DCC on the super resurfacing work along the Pill / Quay; he had received a lot of positive comments.

c.       The Chairman thanked Councillor Mrs Hellyer for her contribution.

80. COMMUNICATION BROUGHT FORWARD ON THE DIRECTION OF THE MAYOR

a.       The Mayor advised that the Port of Bideford Regatta Committee had approached the last Council to house and insure the very large Bideford Bowl, a silver rowing cup, in the Council Chambers. The South Coast Council will present it at the South Coast Championships, but they will take responsibility for it during the time, including transit and insurance.

The Town Clerk advised that it has a value of £50,000.00 and will cost £93.00 a year to insure; Members to consider an appropriate display site.

b.      The Mayor invited Members to spread the word on Bideford’s Big Clean Event to be held on Sunday, 13 October 2019.

The Minutes of the Meeting held on 5 September 2019 were approved and adopted.

Minutes of the Meeting held on 28 August and 18 September 2019 were approved and adopted.

The Minutes of the Meeting held on 12 September 2019 were approved and adopted.

The Minutes of the Meeting held on 10 September 2019 were approved and adopted.

b.        Members considered upon booking the Jonathan Marshall Free Spirit Show at a cost of £1,000 for two shows during the Bideford Fair on 8 August 2019 in Victoria Park.

It was proposed by Councillor Mrs Gubb seconded and

RESOLVED: That the Jonathan Marshall Free Spirit Show is booked for two shows at a cost of £1,000 on 8 August 2020 during the Bideford Fair held in Victoria Park.

86.      APPOINT A NOMINATIVE TRUSTEE ON THE BRIDGE TRUST

The Chairman explained the tenure of the trustees.

Each Councillor received five votes of support with seven abstentions.

RESOLVED: That Councillor Mrs Corfe is appointed as a trustee on the Bridge Trust.

(The Chairman used his casting vote.)

Members were advised that the registration for Bideford as a Fairtrade Town had lapsed.

The Town Clerk spoke about the Councils involvement through councillor representation, as an Outside Body, when it was set up in 2004, and their support through the purchase of Fair Trade items for functions etc.

Given that the Bideford Town status had not been renewed Members could consider nominating a lead Councillor for Fairtrade with a view to setting up a steering Group, which is usually driven by volunteers in the Community, to reaffirm (the status). The interim Minister for Lavington Church has offered to facilitate setting up this Steering Group.

Councillor McKenzie volunteered to represent Bideford Town Council and assist with the process.

RESOLVED: That Councillor McKenzie is the Council’s representative for Fairtrade.

“To source and provide a metal structure in Victoria Park Bideford that will be used for members of the public to dispose of plastic waste. This will be similar to the one in Westward Ho! but I propose the structure to be a boat.”

Councillor Mrs Corfe explained that an eye catching structure would remind people of the Council’s aspirations to be plastic free; TDC would remove the items through their normal service. She had approached the person responsible for the Westward Ho! “Philup the Fish” structure.

Councillor Lawrence noted that the Westward Ho! Structure had suffered rusting given the sea front location. He suggested that the Staffing, Finance and General Purposes (S, F & Gp) Committee should consider the funding implications.

The Town Clerk intimated that Members could agree in principle and that the S, F & Gp Committee could confirm funding.

Discussion followed on the appropriate materials to be used, situation of the Structure and whether TDC had been approached. The Town Clerk confirmed that the funding could be allocated from the current project fund.

It was proposed by Councillor Mrs Corfe, seconded and

RESOLVED: That subject to TDC agreement the Motion is supported.

• Councillor McKenzie indicated that there will be a review of the Constitution.

• The Chairman advised that the Brunswick Wharf contract had been signed and gave an insight into the ownership history.

• A Future High Street Meeting will be convened on Monday 23 September 2019.

Discussion followed on the Trust’s maintenance set up and availability and criteria for Higher Education Grants and Annual Bursaries.

The business of the meeting having been concluded the Mayor thanked the members for their attendance at the meeting which concluded at 7.50 pm. 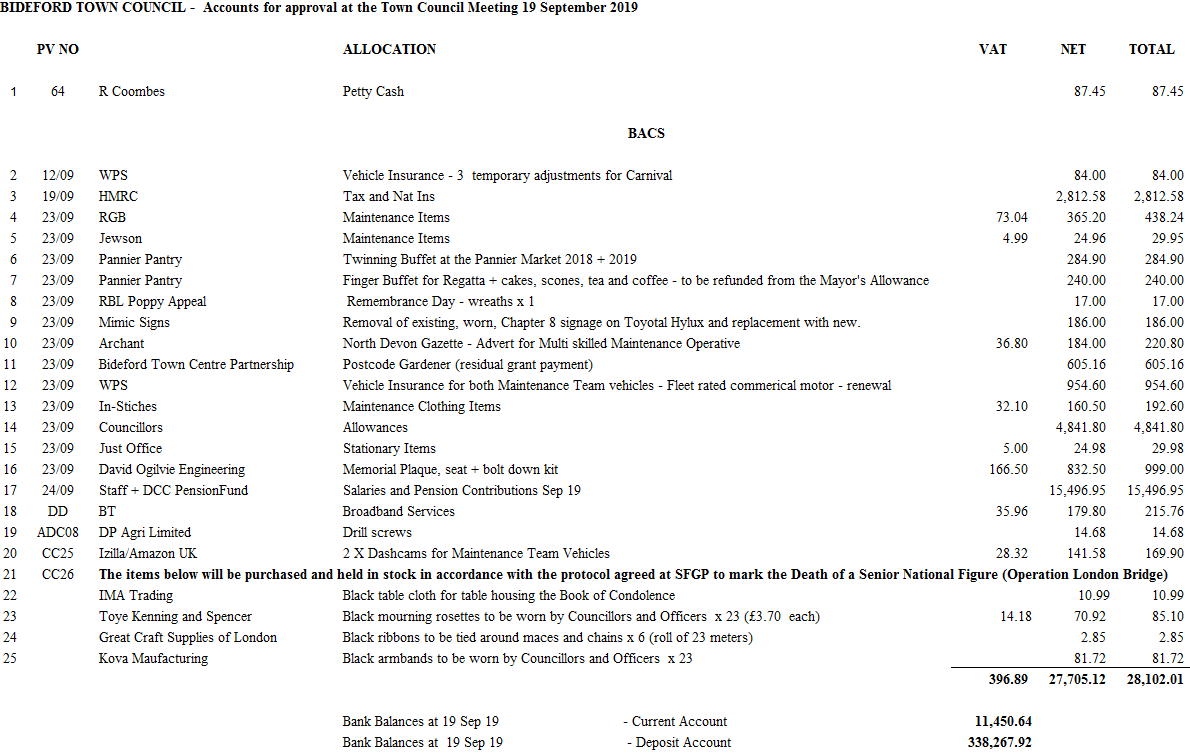