Minutes of the Staffing, Finance & General Purposes Committee held in the Town Hall on Thursday 24 March 2022 at 6.30 pm

116.     DECLARATIONS OF INTEREST AND ANY REQUESTS FOR DISPENSATION ON ITEMS ON THE AGENDA

Councillor Mrs Gubb declared a pecuniary interest in item 13.b. (Husband has worked with the Maintenance Team.)

Proposed by Councillor Christie and seconded by Councillor McKenzie, the minutes of the meeting held on 17 February (Grants) 2022 were approved and signed as a correct record.

The Town Clerk advised that an extension to the submission date for the citizen’s awards had been made.

Councillor Christie advised that following his motion to Council to add a second plaque to the war memorial in Victoria Park recording the names of those Bidefordians who have died in conflict since the First World War, he had been researching the names for the plaque. There are several anomalies within the sources he has looked at, and he advised that it will take a little time to produce the correct list of names.

Members considered the Local Authorities (Members’ Allowances) (England) Regulations 2003 in order to make a recommendation to Council for the financial year 2021/22.

Members considered whether to agree to the payment for the church clock service at St. Mary’s church ahead of it being repaired.

RESOLVED: That the service payment is approved.

Members considered the purchase of a gift for the 45th anniversary of the Twinning Association.

RESOLVED: That a gift is commissioned by Rob Patterson from the Bideford Pannier Market.

Members considered the purchase of a portable projector and screen for use in the Council Chamber.

Councillor Hawkins recommended that the Council purchase a large, flatscreen television on a stand alongside a laptop. A webcam for zoom meetings or Youtube streaming is also a possibility. It was agreed that Councillor Hawkins would look into the possibilities and costings and report back to SFGP.

Members advised that the Town Council should not take any future responsibility for the maintenance of the facility and that a ring-fenced sum, as suggested in the report will be made available for maintenance on application by the responsible body.

Members do not feel that funding should be put towards a facility in the West of Bideford, as there is already provision.

RESOLVED: That the Memorandum of Understanding should be returned to SFGP for agreement, a sum for the maintenance of the lights at Pollyfield will be ringfenced, and no funding is allocated to a facility West of the Water in Bideford.

Members considered the reply from Red Earth following a letter asking if Red Earth would like to contribute towards the cost of the underbridge lighting repairs, and to agree a response.

RESOLVED: That the letter is noted and a reply is not required.

Members considered the costs and benefits of employing the Seasonal Worker between May 2022 and September 2022 to assist with the additional summer workload.

RECOMMENDED: That the Seasonal Worker is employed between May 2022 and September 2022 to assist with the additional summer workload.

The business of the meeting having been completed, the Chairman thanked the members for their attendance and the meeting concluded at 7.05 pm. 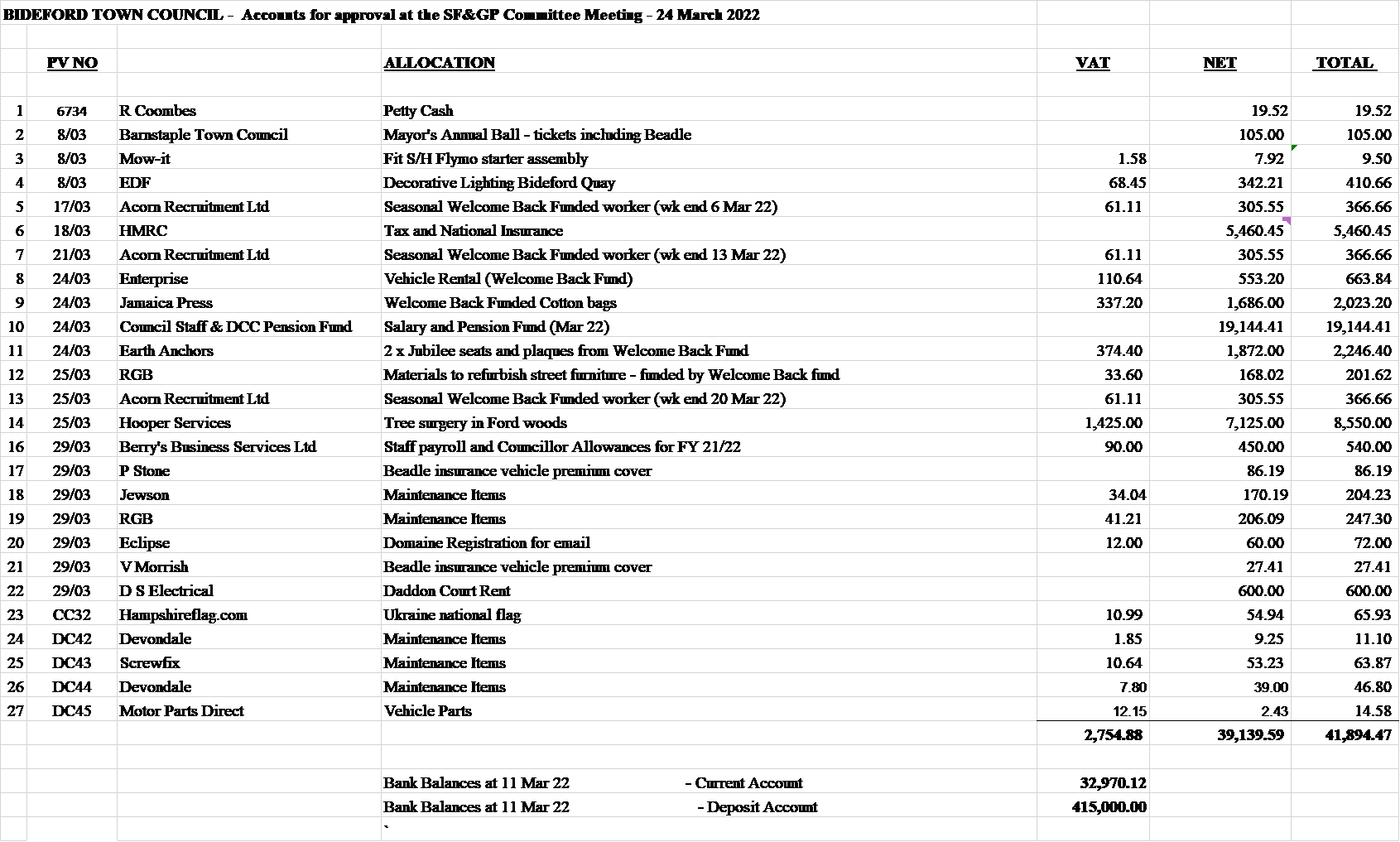