Minutes of the Staffing, Finance & General Purposes Committee held in the Town Hall, Bideford on Thurday 2 December 2021 at 6.30 pm

070.   DECLARATIONS OF INTEREST AND ANY REQUESTS FOR DISPENSATION ON ITEMS ON THE AGENDA

Two Members of the Armed Forces spoke about the Remembrance Day Parade held on Remembrance Sunday and the lack of Town Council representation at the War Memorial at Victoria Park on Armistice Day.

They advised that they were speaking on behalf of a number of Veterans who over the years had felt that Councillors appeared to be upstaging the day on Remembrance Sunday by processing along the Quay ahead of the Veterans. They asked Members to reconsider how the procession operates in future. Some Veterans will not attend the service because of their feelings about the Councillors’ procession.

Members briefly discussed the Town Council’s role in organising the parade, and how this had been left to the Town Council following the end of the Bideford Branch of the Royal British Legion. Some Members felt that without Town Council participation the turnout on the day would be reduced.

Members voiced the opinion that there should be Town Council representation at Victoria Park on Armistice Day. They did however explain that the Mayor lays a wreath at the Memorial at St Mary’s Church on Armistice Day where there is also a short service.

The Chairman thanked the Members of the Public for their contribution and advised that the two issues would be further discussed and a recommendation made to Full Council at agenda item 10, which fully detailed their complaint.

A representative from the Store Homelessness Project spoke in support of an emergency grant for provisions for their new premises. She detailed the usage of their different premises and advised that the food bank was moving up to the old liberal club. This will now become a drop in centre, food bank, and café, with an element of social care. The grant requested will be used to stock the foodbank for and resources for the kitchen.

Members considered a request from the Store Homelessness Project for an emergency grant for provisions for their new premises.

RESOLVED: That an emergency grant of £2,000 is awarded to the Store Homelessness Project.

(Councillor D Ratcliff declared a non-pecuniary interest as the applicants are known to him and he has previously made a donation to the charity. He advised that he would abstain from the vote.)

Members considered a request from the Sea Cadets for an emergency grant towards CCTV.

RESOLVED: That an emergency grant £1,740 of is awarded to the Sea Cadets towards CCTV.

Members considered whether to continue with the membership of the Rural Market Town Group following the expiry of the free, trial period.

RESOLVED: That membership of the Rural Market Town Group is discontinued.

Members considered a complaint from two Members of the Armed Forces regarding The Town Council Parade on Remembrance Sunday and the absence of Town Council representation at Victoria Park on Armistice Day. The Complaint was divided into two areas and is detailed below:

As a serving member of the armed forces I have just attended the Bideford memorial to mark the 11th hour of the 11th day of the 11th month. I am shocked and appalled that not only had Bideford Town Council not organised anything to mark this important moment, but there was not a single representative present. In the past there has always been council representation at the park, including a bugle, on occasion, for the sounding of Last Post. So to have a groundsman playing it from his phone shows a degree of disrespect, not in respect of the groundsman but the council. There were many shocked members of the public and veterans there, who were appalled.

Please allow me to explain why such a perceived small act can be so damaging and upsetting and create a huge impact on a number of people, mostly veterans and those still in service:

To understand the offensiveness of the act of the Town Council parading in a ceremonial manner during Remembrance Sunday, it needs to be remembered that whilst the military will choose its battles within a conflict, it is elected public servants who choose to deploy the country’s armed forces in defence of the country’s democracy. Potentially ensuring some will lay down their lives. Service personnel understand and accept this situation, it is part of the role they play.

No military ever chooses to go to war, that is the privilege of the elected. Therefore Remembrance Sunday is the opportunity for the public and the elect to pay their respects to those armed forces personnel whom survived and ultimately to those whom gave their lives and also to those families left behind. For it this selfless act which protects the democracy which sees public servants elected into office to make life changing decisions such as the one mentioned.

I would suggest the correct and more appropriate action, is for the elected to make their way to the event in the same way as everyone else attending, as is the case across the country and particularly at the Cenotaph and not to proceed as a formed body parading along the road. It is very distasteful and shows poor judgment.

Members considered the complaint as follows:

There was some discussion around why the Town Council had not been made aware of these feelings before, if as suggested, Veterans had felt disgruntled for a number of years. Members also pointed out that the Town Council had stepped into the breach when the Bideford Branch of the Royal British Legion folded. The parade is largely organised by a Member of Staff who is ex-forces. Our Town Marshal is also ex-forces.

Members discussed whether Councillors should continue to wear their Councillor Robes during the Remembrance Sunday Parade. Some Members said that they wear the robes to honour the fallen and represent the people of Bideford. Others felt that robes should not be worn.

It was suggested by one of the Members of the Armed Forces present, that in future, The Town Council requests a troupe of marching personnel from Chivenor to lead the parade.

It was then suggested that The Town Council canvasses the Veterans’ opinions on how they would like the parade to be run. They can be part of the process. One of the Members of the Armed Forces present advised that he would be more than happy to help and has contacts with the Royal British Legion. The Mayor offered to be the point of contact for the Town Council.

It was proposed by Councillor Christie and seconded by Councillor McKenzie that:
All the local organisations who are part of the parade and Lord Burnett, are consulted on their feelings about the order of the parade. The Mayor will act as the point of liaison. (Following further discussion and a proposal by Councillor Corfe, this motion was withdrawn).

RECOMMENDED: That in future there will be a Town Council presence on Armistice Day at Victoria Park.

The Town Clerk advised that specialist access equipment would be required to investigate the four lights which have failed under the Longbridge. A price has not yet been ascertained. There was discussion on the ownership of the lamps, and Councillor Christie felt that they had been installed by the Town Council quite a number of years ago. The Town Clerk had been unable to find any paperwork in the files to confirm ownership. She was asked to check with Devon County Council and English Heritage with regards to their records. It was suggested that when the lights are re-lamped, they should be replaced with environmentally friendly lamps.

It was agreed to defer this item until further costings and information is available.

Members considered the purchase of a chewing gum removal system. Members discussed whether Torrington Town Council had already purchased this machine, and if they had not, whether they would wish to jointly purchase it with Bideford Town Council. The Town Clerk was asked to make enquiries.

RESOLVED: That the chewing gum removal system is purchased by Bideford Town Council and enquiries are made with Torrington Town Council, as to whether they would like to share ownership and costs with the machine.

The business of the meeting having been completed, the Chairman thanked the members for their attendance and the meeting concluded at 7.50 pm. 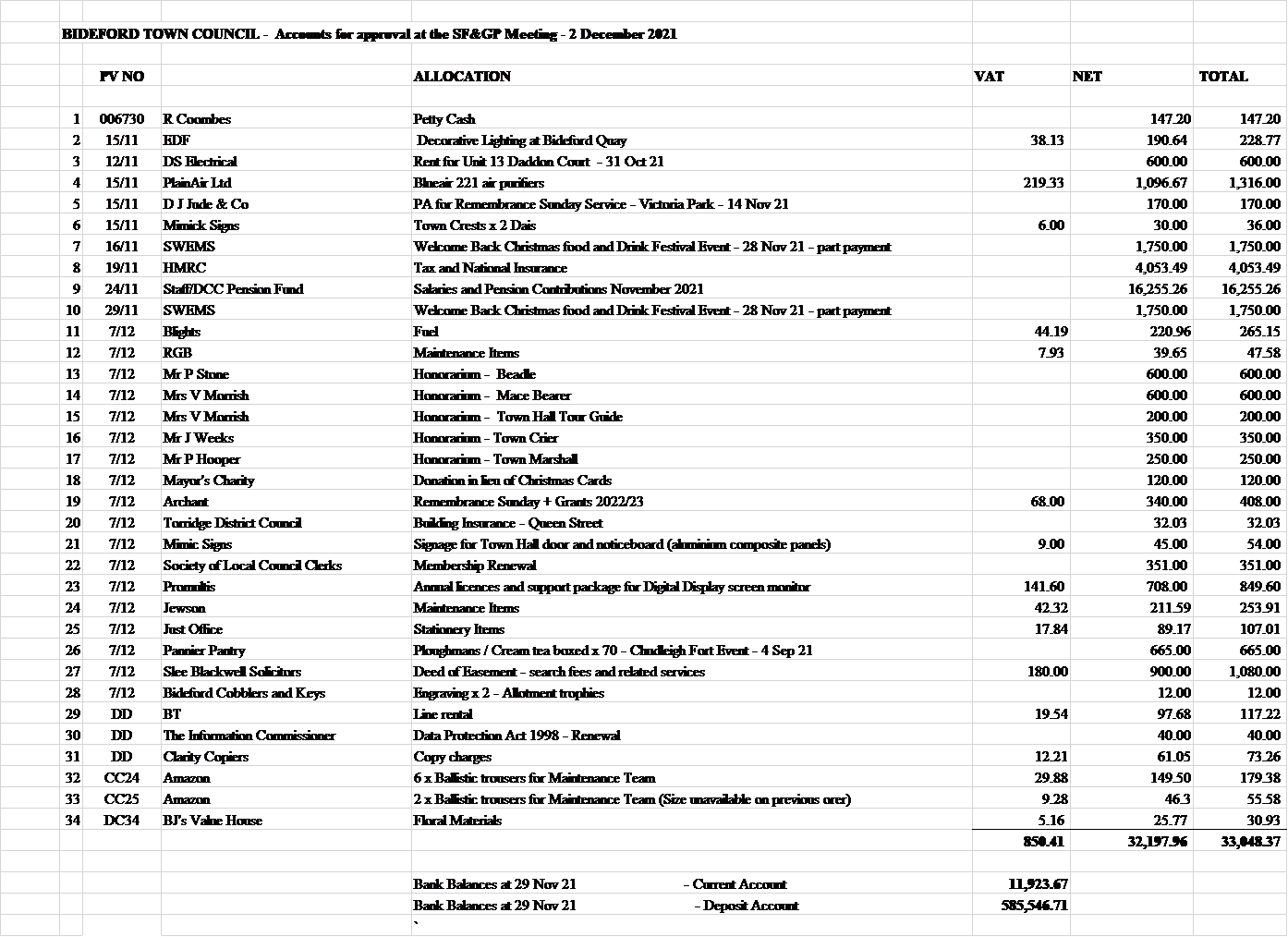