Minutes of the Market Management Committee held in the Bideford Pannier Market Hall on Thursday 8 December 2022 at 6.30 pm

69.   DECLARATIONS OF INTEREST AND ANY REQUESTS FOR DISPENSATION ON ITEMS ON THE AGENDA

Members noted and agreed the Minutes of the Working Group Meeting held on 1 December 2022.

Discussion followed on how best to progress, resolve upon and make recommendation to Council on pursuing the necessary forward thinking changes to realise the potential of the Market Hall, making it viable, more relevant and more widely used by the Community.

Members recognised the need to move away from the current Tuesday / Saturday Market trading model; in its present form it has run its course. By clearing the Hall it can be fully utilised as an Event / specialist market space; the area fully exploited. It can be more widely offered to and used by the wider Community (organisations).

The Friends of St Helens, Abbotsham Primary School, had drawn a thousand visitors in a period of three and a half hours to the Market on the evening of 2 December 2022. There was precedent set for well organised and managed Events.

It was noted that there were no tenants in the Market Hall on the Wednesday, following the Late Night Shopping, and only two in the Hall earlier today. It was highlighted that throughout the Market, where tenants were not in attendance it had a detrimental effect on fellow tenants and the Market offer as a whole.

The Clerk was instructed to remind tenants of the importance of their trading commitment.

RESOLVED: That the lists of payments for 8 December 2022 be approved.

The Clerk was instructed to explore the mechanism to allow for musical “event performance,” without the current licence with a view to removing the current audio backing / commitment to the excessive cost, at the earliest opportunity.

a.   The Clerk highlighted the work of a corps of tenants who had worked hard to promote the Market throughout the Festive period. The work on the Grotto, gifts identified and wrapped, for Santa to present to the young visitors had been a great success.

b.   The Late Night Shopping Event had been disappointing. Only half the number of expected traders attended, and foot fall was poor. The Hall was attractive; some traders genuinely alluded to a successful evening, others were a little more stoical. Santa was very enthusiastic and very well received; DJ Jude provided an excellent entertainment that was deserving of greater attendance.

c.  The Clerk requested Members’ discretion to vary the casual rental rate on 17 and 24 December to encourage those traders who have recently expressed interest in the Market to trade.

Following discussion, led by Councillor Bushby, Members wholeheartedly agreed to waive the rate for casual trading on both dates.

Members previously had sight of the Draft Budget Document.

Thorough discussion ensued regarding the impact on the cost of living to individuals and businesses (including raw costs), the impact that the change to the utility contract will have in June 2023, direct market costs, expected maintenance bills, investment and variable receipts.

RECOMMENDED: That the Draft Market Budget 2023/2024 be supported by the Council.

RECOMMENDED: That a rental increase of five per cent be implemented effective 1 April 2023; the resultant tariffs are either rounded up, or down, to the nearest pound. That each tenant / trader is advised accordingly. The Daily Casual Table rate will remain fixed at nine pounds per stall / pitch.

Ms Hilton alluded to approaches from tenants concerned at the attendance and commitment to trading by a minority of fellow tenants.

The Chairman thanked Ms Hilton for her attendance / contribution.

RESOLVED: That in view of the confidential nature of the business about to be discussed, the meeting will be held in Part II (Closed Session).

There was no report.

a.   An application had been received for the vacant Butcher’s Row Unit 5 that had only recently be vacated / advertised.

Members did not agree that it was appropriate to offer the Unit tenancy, at this time.

b.   The Clerk indicated that there were occasions of rental payment arrears.

The business of the meeting having, therefore, been completed, the Chairman thanked the members for their attendance and the meeting concluded at 8.13 pm. 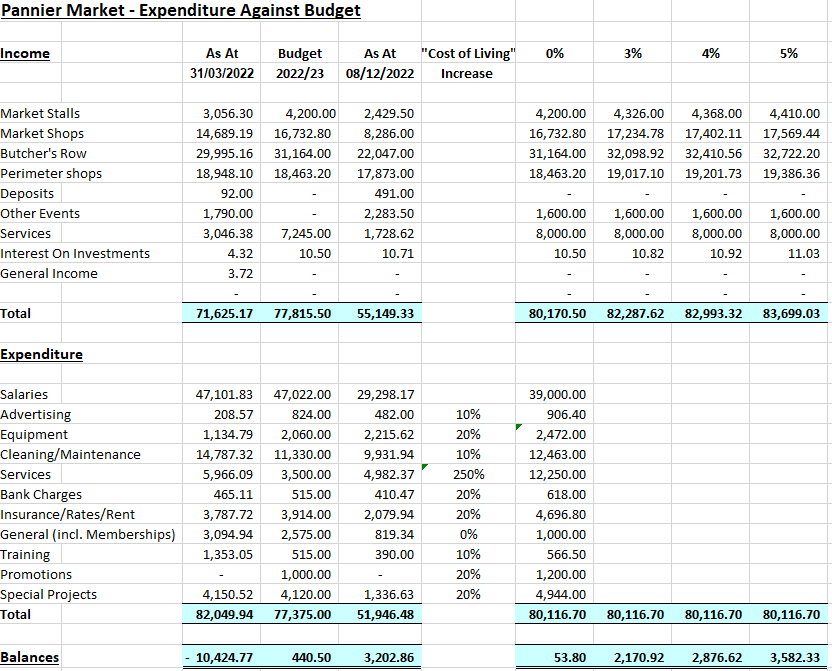